Texas teachers are #blowingthewhistle in the best possible way

With enthusiasm growing within the education community for voting in the upcoming primaries, we've been reporting here on Teach the Vote about the efforts of some elected officials and special interest groups to try to quell educators' momentum by questioning the legality of our nonpartisan get out the vote (GOTV) programs. Now it appears that those efforts, which many believe are aimed at voter suppression, are backfiring as educators continue to rally their colleagues to vote later this month.

We've recently reported on an attorney general's opinion issued at the request of Sen. Paul Bettencourt (R-Houston) who objected to GOTV initiatives led by the Texas Educators Vote coalition of which ATPE is a proud member. Texas Attorney General Ken Paxton (R) quickly issued a nonbinding opinion that school districts should not bus staff and students to the polls, because Paxton questioned the educational value of such an activity.

We've also watched as the notorious anti-public education group Empower Texans (ET) and its affiliates have used scare tactics to try to shut down GOTV initiatives in schools and political activism by education employees. Late last year, ET, whose wealthy donors have spent millions to fund the campaigns of Paxton, Bettencourt, and other officeholders like Lt. Gov. Dan Patrick (R), bombarded school districts with open records requests demanding copies of employee emails and other documentation that they hoped would show evidence of illegal activities. When the open records requests apparently yielded no bombshells, Empower Texans resorted to the desperate measure of mailing letters to individual educators around the state inviting them to act as "whistleblowers" and report on colleagues who might be violating the attorney general's "ruling." Many of you educators who are readers of Teach the Vote have reported receiving one of these letters from ET's lead attorney, general counsel Tony McDonald.

The letters that ET has spent huge sums of money to mail to teachers are misleading and unethical. First, the text of the letter mischaracterizes AG Paxton's nonbinding opinion as a "ruling," implying that it has the force of law when it is merely an advisory expression of Paxton's views on the law. The letters also irresponsibly fail to mention that Texas's whistleblower laws would not provide teachers any legal protection for reports made to an outside entity like ET. ATPE Managing Attorney Paul Tapp points out why the letter from ET's lawyer is problematic and does not reflect how our state's whistleblower statutes actually work.

"It’s unfortunate that Mr. McDonald has mischaracterized Texas law in a way that he apparently believes would benefit his organization at the expense of those he claims to care about," says Tapp. "There would be no 'whistleblower' protection for any report to Empower Texas. As an attorney, Mr. McDonald should know that a report of suspected illegal activity is only protected if it is made to the appropriate law enforcement entity."

It is highly unlikely that ET's intimidation campaign will reveal any evidence of school administrators and trustees unlawfully using school district resources to campaign for specific candidates, and the Texas Educators Vote coalition has always included in its outreach materials guidance for educators on what types of political activities are and are not allowed in schools. In the meantime, educators are reacting to ET's continuing attacks on the public school community by turning to social media.

Starting yesterday, educators took to Twitter in droves to share their support for public schools. Incorporating the hashtag #blowingthewhistle and tagging ET in many of their tweets. Teachers and other public education supporters used the social media tool not for ratting out colleagues for talking about the election as ET had hoped, but instead for praising educators who go the extra mile every single day to help students.

ATPE member Cristie Plummer, who teaches at Bastrop Middle School, was one of the educators who shared her own #blowingthewhistle tweet yesterday and was featured in this article by the Austin American-Statesman. 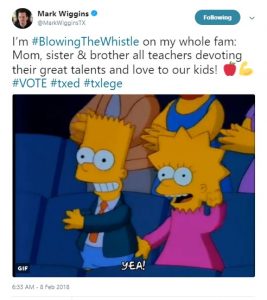 ATPE Lobbyist Mark Wiggins also tweeted his support for the teachers in his own family by #blowingthewhistle on them via Twitter.

The Twitter backlash from teachers was featured today in a new article from the Texas Tribune about the Texas Educators Vote coalition. Reporter Emma Platoff wrote about how our coalition's GOTV efforts have rankled ET and Tea Party groups who are also worried about other grassroots movements igniting on social media and encouraging teachers to #blockvote in the Republican Party primary for pro-public education candidates. The #blockvote campaign mentioned in the article is being promoted by the Facebook group known as Texans for Public Education, and not by the nonpartisan Texas Educators Vote coalition. However, both groups share a desire to see higher turnout among educators at the polls this year.

The reaction this week to the ET whistleblower campaign proves, once again, that educators are rising above the baseless threats of the politicians and special interest groups that want to dismantle public education. The billionaires backing candidates and officeholders who refer to hard-working teachers as "educrats" and think that using taxpayer dollars to fund unregulated private schools should be the state's top education priority are clearly terrified of the potential for high voter turnout in the March 6 primary.

We applaud Texas educators for their classy response to the continuing attacks on their profession. ATPE hopes that our members and their colleagues will keep highlighting the outstanding things happening in our public schools every day and will never weaken their resolve to be active and informed voters in the 2018 primaries and all other Texas elections. Kudos, educators!