Texas projected to face $4.6 billion deficit by the end of the current biennium

Texas Comptroller Glenn Hegar, the elected official charged with overseeing the state's finances, now expects Texas will face a $4.6 billion deficit by the end of the current two-year budget cycle. The state had as recently as February been looking at a multi-billion dollar surplus heading into next session.

One of the comptroller's primary jobs is releasing state revenue estimates, which project how much tax revenue the state is expected to collect in relation to how much it is budgeted to spend. These estimates are revised periodically, particularly in the event of a drastic change in economic circumstances. The economic downturn caused by the simultaneous events of the COVID-19 pandemic and the oil price war certainly marked a drastic change. 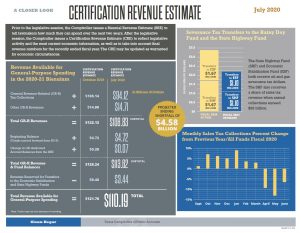 The comptroller told legislators back in April that the economic double-whammy had sent Texas officially into a recession. On Monday, Hegar testified before the Legislative Budget Board (LBB) and shared a revised revenue estimate that offered sobering numbers. The state is projected to end fiscal year (FY) 2021 with a budget shortfall of $4.6 billion -- a $7.5 billion reversal from the $2.9 billion surplus his office projected in the certified revenue estimate (CRE) released in October 2019. The state is now expected to have $110.2 billion in available general revenue for the 2020-2021 budget biennium, representing an $11.6 billion decline from $121.8 projected in the 2019 CRE.

A mathematically-minded observer may note that the numbers do not exactly match up. Hegar explained that while revenue collections dropped by $11.6 billion, the budget fell by only $7.5 billion as a result of a handful of factors that reduced the amount of money the state was expecting to spend. Among them, Texas received $1.2 billion of federal CARES Act funding for public education that it used to offset state spending. Changes in the assumptions regarding the state share and the local share of public education funding resulted in $1.7 billion in unanticipated local funding. The state also received an additional $700 million in recapture (or "Robin Hood") payments that it had not anticipated. 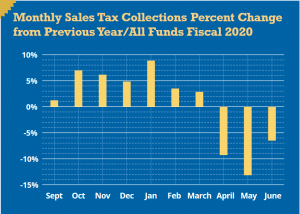 Sen. Finance Committee Chair state Sen. Jane Nelson (R-Flower Mound) asked Hegar in Monday's LBB hearing whether legislators should expect to tighten their belts during the next legislative session. Hegar was reticent to prognosticate beyond the current budget cycle. However, he was quick to point out that he had pushed early on for agencies to reduce their spending ahead of next session. State leaders have since instructed state agencies to reduce spending by 5% across the board. Hegar noted that instruction is not factored into this projection. Any savings will however reduce the need for supplemental spending in the next legislative session, reducing the overall pressure on the next biennium's budget.

In response to a question posed by Senate Education Committee Chair Larry Taylor (R-Friendswood), Hegar indicated that the state will be able to ensure schools receive the additional funding promised this budget cycle as a result of the school finance bill House Bill (HB) 3. Yet Hegar suggested there is tremendous uncertainty as to what the state will be able to provide in the upcoming 2022-23 budget cycle.

Lt. Gov. Dan Patrick (R-Texas) said Monday that school districts across the state have roughly $14 billion in fund balances, which represents each district's cash reserves. Patrick suggested that the state could tap those fund balances to offset the budget deficit. Patrick separately acknowledged that teachers are now included in the list of "frontline" workers in the COVID-19 pandemic.

The revised estimate released this week does not take into account agency budget cuts, whether schools reopen for in-person versus remote instruction, or any future federal relief money. Hegar explained Wednesday in an interview with Texas Tribune Executive Editor Ross Ramsey that the estimate does not factor in any additional federal relief money until a bill is passed by Congress and signed by the president. Hegar also told Ramsey that the estimate was based upon the assumptions that the economic recovery is already underway, that there will not be an additional spike in COVID-19 cases in the fall that would spark another shutdown, and that GDP may return to normal by the end of 2021.

Hegar said that the state saw a less drastic decline in sales tax revenue than he had previously feared. The state also took in $950 million more in taxes from online purchases as a result of legislation passed during the last legislative session that expanded the sales tax. 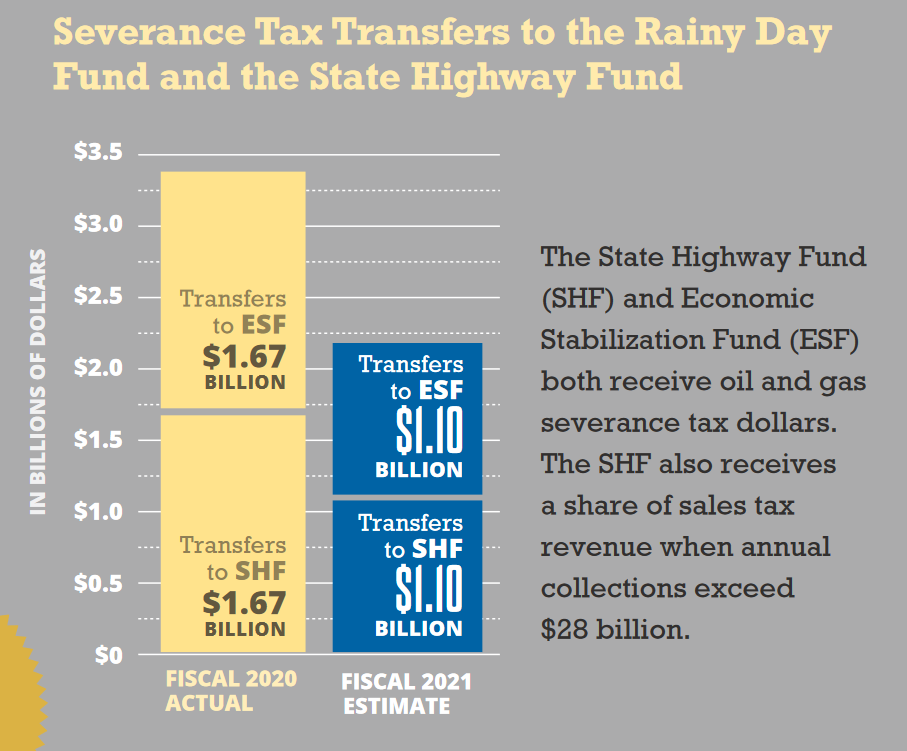 The economic stabilization fund (ESF), commonly referred to as the "rainy day fund," is projected to end FY 2021 with a balance of $8.8 billion. This fund is fed by taxes collected from oil and gas operations, which have been hit hard by the combination of lower oil prices and a reduction in production following the precipitous drop in demand caused by the economic impacts of the pandemic. The ESF was designed as a safety feature to enable legislators to dip into the fund to during lean years, smoothing out the fluctuations in available tax revenue caused by volatility in the oil and gas market and enabling the state to maintain critical government services.

In both testimony and interviews this week, Hegar has emphasized the need for the community to come to terms with the reality of a protracted battle against COVID-19. Hegar highlighted citizens' responsibility to wear masks and engage in safe practices designed to slow the disease's spread and prevent another shutdown. On a positive note, Hegar noted the healthy ESF and potential savings from agency budget cuts are among the measures at the state's disposal to help manage the budget shortfall.

The comptroller discussed other potential sources of revenue and savings in Wednesday's interview. Hegar contended that an income tax is unlikely to pass in Texas, where such a proposal would require a supermajority of the Texas legislature and a statewide vote. The comptroller was also skeptical of the idea of legalizing and taxing marijuana, which polling shows is supported by most Texans. Hegar instead pointed to budget measures taken during the 2011 legislative session, which saw large budget cuts (including $5.4 billion from public education) as a result of a projected budget shortfall. The comptroller also mentioned deferring public education payments and looking at funding for Medicaid.

When the 87th Texas Legislature convenes in January 2021, shoring up the current budget will be the first task legislators face. Their next task will be to set the budget for the 2022-2023 biennium, which Hegar warned is likely to be a much bigger issue -- although it's too early to forecast the scope of the challenge. That will be the focus of the comptroller's biennial revenue estimate (BRE), which is usually released right before the new legislative session begins.