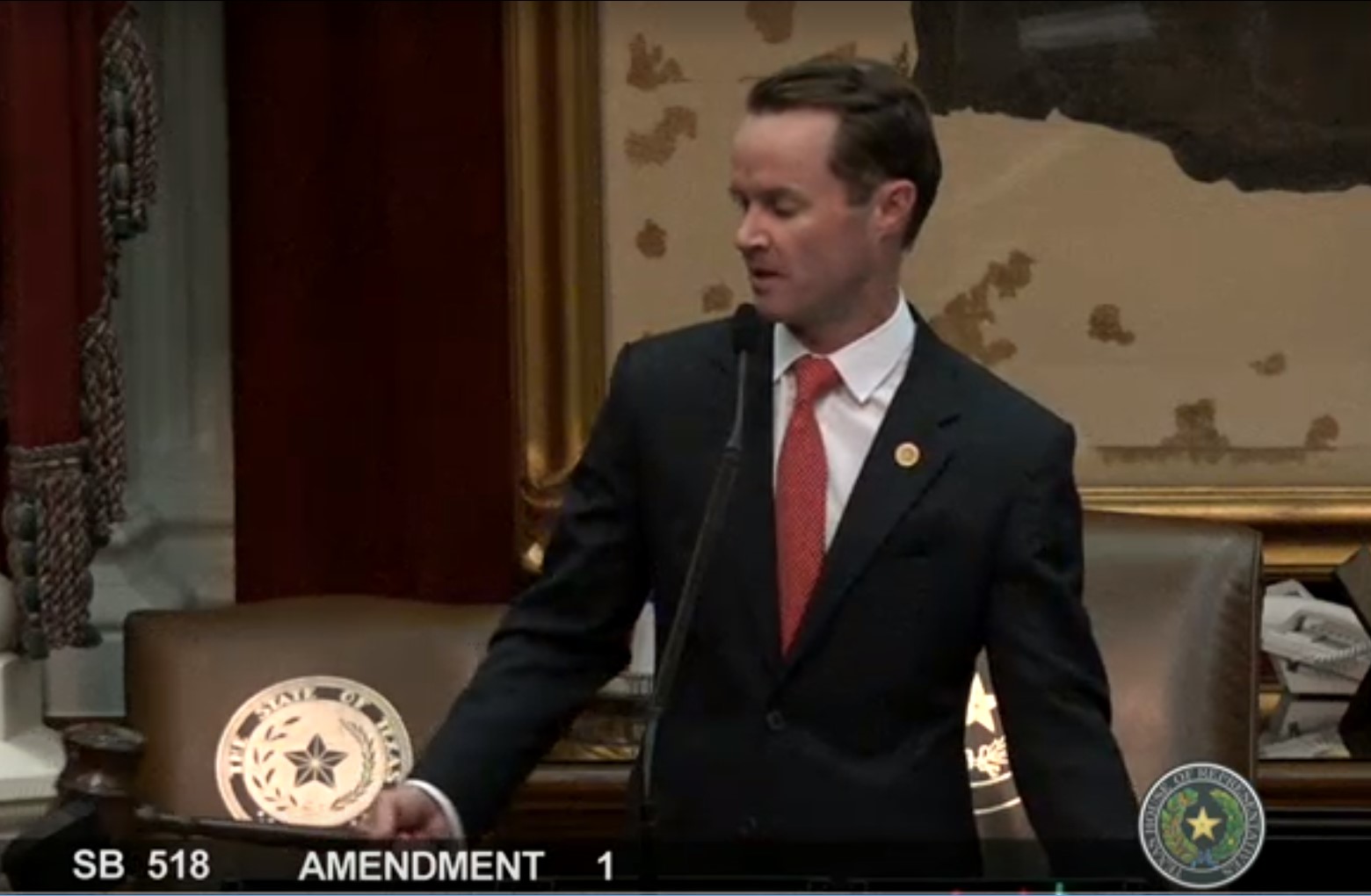 It was the last chance for bills to receive a vote in the Texas House – on second reading by midnight Tuesday night, and on third reading Wednesday, May 26. After passing the final version of the state budget this afternoon, the Texas Senate loaded up a school finance cleanup bill with floor amendments before passing it, too.

The House called it a day shortly before 7 p.m. Wednesday, with House Speaker Dade Phelan announcing plans to reconvene at 10 a.m. Thursday. Lt. Gov. Dan Patrick called the Senate into a caucus behind closed doors this evening after chiding the House for not working hard enough to pass bills. Patrick also took to Twitter this morning demanding that the Governor call a special session in June to consider three controversial bills that failed to survive last night’s House deadline.

Bills that made the cut in the House

The House passed a handful of education-related bills last night on second reading and today on third reading. Senate Bill (SB) 1716 by Sen. Larry Taylor (R-Friendswood), creating a new program for students in special education to obtain supplemental education services, made the cut after being amended yesterday and today on the House floor. As originally filed, SB 1716 was designed to codify and make permanent a voucher program created by Gov. Greg Abbott last year using discretionary funds provided to Texas in the federal relief legislation. As had been recommended during a House committee hearing, the House amended the bill yesterday in an effort to remove its voucher components. Another amendment was put on the bill today aimed at ensuring the supplemental services are not used in place of federally required compensatory services for students in special education.

The House also passed SB 1365 by Sen. Paul Bettencourt (R-Houston), another bill that was originally opposed by many in the education community before it was substantially amended. The House added clarifying language to the bill dealing with accountability sanctions to remove concerns that the bill would expand the education commissioner’s power to take over operations of a school district, as well as adding due process protections for districts. The bill calls for another year’s pause in the state’s A-F accountability rating system in 2021-22 while schools work to remediate students following the COVID-19 pandemic. SB 1365 also halts progressive sanctions for schools consistently rated with Ds and Fs once the school earns a C rating.

SB 2081 by Sen. Jose Menendez (D-San Antonio) setting class-size limits for prekindergarten was also approved by the House, along with SB 1232 by Taylor dealing with how the Permanent School Fund is managed. The House likewise passed SB 797 by Sen. Bryan Hughes (R-Mineola) on displaying the national motto in schools, SB 1697 by Sen. Angela Paxton (R-McKinney) to allow students to voluntarily repeat a grade, and SB 1267 by Sen. Royce West (D-Dallas) aimed at streamlining educators’ professional development and training requirements.

The clock expired last night before the House could debate Taylor’s SB 2026 on informed patriotism instruction, SB 1522 allowing adjustment of a district’s average daily attendance on the basis of a calamity, or SB 2094 regarding accelerated instruction. However, provisions of those bills remain alive in House bills already sent to the Senate. The House declined to vote on either SB 29 by Sen. Charles Perry requiring students to participate in UIL athletic activities based on their gender assigned at birth or SB 10 by Bettencourt regarding legislative advocacy by school districts and other political subdivisions; those two bills are among the trio that Lt. Gov. Patrick now wants to be considered in a special session. 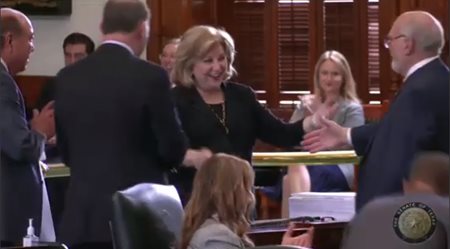 Across the rotunda on Wednesday, Senators adopted the conference committee report on SB 1 by Sen. Jane Nelson (R-Flower Mound), the nearly $247 billion two-year state budget. The budget is the only bill the Legislature is constitutionally required to pass before adjourning at the end of the 140-day session.

Once the House similarly adopts the nearly 1000-page conference committee report for SB 1, which it has until Sunday to do, the final budget will head to the Governor’s desk. The Governor has the ability to veto individual provisions in the budget or the entire budget itself.

The Senate also took up a major education bill Wednesday afternoon. House Bill (HB) 1525 by Rep. Dan Huberty (R-Kingwood) was intended to be a “cleanup” bill for HB 3, the school finance reform bill passed by the 86th Texas Legislature in 2019. Along with changes to technical aspects of the school finance formulas, HB 1525 would give districts another year for educators to complete the HB 3 requirement to attend a reading academy.

Many public education stakeholders raised concerns over language in the bill that would give the unelected commissioner of education the authority to adjust a district’s funding entitlement. The bill’s sponsor, Senate Education Committee Chairman Larry Taylor (R-Friendswood), added a floor amendment to ensure that any adjustments in funding would be limited to an increase, not a decrease. Based upon recent guidance from the federal government, Sen. Taylor also removed language that would have required districts to hold some of their federal emergency funding in reserve.

Like other large bills at this stage in the legislative session, HB 1525 quickly became a “Christmas tree” for other education-related legislation, with amendments added to it like ornaments. Members considered more than 30 floor amendments, some of which they did not have the opportunity to read beforehand.

Chairman Taylor added several funding programs to the bill, including $1.35 billion for educational supports and $207 million in federal discretionary funds. His amendment included $350 million to aid districts in expanding broadband and providing students with access to the internet. 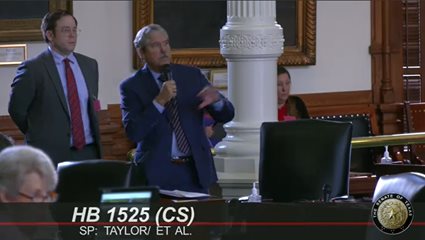 Taylor separately added an outcomes-based funding bonus that would reward schools based on their student test scores. Sens. Jose Menendez (D-San Antonio) and Nathan Johnson (D-Dallas) pushed back on outcomes-based funding, questioning whether the state should continue to attach high stakes to tests. The amendment passed on a vote of 23-7.

Another Taylor amendment added a special education supplemental services program that mirrors the House version of SB 1716, which the House amended and passed today. Sen. Menendez pointed out that the state should ensure it is meeting its minimum legal obligation to serve students in special education before shifting its focus to supplemental services. The amendment to the school finance cleanup bill passed on a 18-13 vote.

The lone amendment rejected by the Senate was one by Sen. Eddie Lucio (D-Brownsville) to protect teacher pay raises under last session’s HB 3. The amendment failed on a 14-17 vote, with Chairman Taylor among those who voted against protecting teacher pay.

After adding 23 amendments to the bill, the Senate voted unanimously to approve HB 1525.

The Senate also approved HB 1468 by Rep. Keith Bell (R-Forney), which would allow school districts to continue to offer expanded virtual instruction to students as they did under temporary exemptions during the pandemic. HB 1468 would allow students to enroll in another district or charter school’s virtual program with a memorandum of understanding between the sending and the receiving district or charter school.

ATPE opposes this bill because it could worsen the already catastrophic academic consequences of statewide virtual education over the past year. HB 1468 lacks a suitable mechanism for ensuring proper student fit, lacks minimum academic standards for participating students, and fails to ensure proper student-teacher ratios. ATPE has recommended instead that the Legislature create a commission to study virtual education before enabling a major expansion. (The Senate voted Monday to approve its version of a House bill to create such a commission, Rep. Ken King’s HB 3643.)

Chairman Taylor, the Senate sponsor of HB 1468, amended the bill on the Senate floor today to raise the maximum number of a district’s students who could participate in a local virtual program from 10% under the Senate committee substitute to 25% of enrollment. Taylor also extended the expiration date from 2023 in the House version of the bill to 2027.

Other amendments to the bill would allow for the temporary continuation of existing full-time virtual programs and removing the two virtual programs operated by state university systems from the bill. Taylor added an amendment requested by the Texas Education Agency (TEA) to grant the State Board for Educator Certification (SBEC) rulemaking flexibility to define the guidelines for satisfying the requirements of an internship in a virtual setting.

HB 1468 would permit a district or charter to operate a local virtual program only if it is rated a “C” or better under the state accountability system. Sen. Paul Bettencourt (R-Houston) amended the bill to allow participation if a school was listed as “not rated” for the most recent accountability cycle, provided their last rating was a “C” or better. Bettencourt also amended the accountability language under HB 1468 to compare the performance of students in the virtual program to all other students in the school.

Sen. Bryan Hughes (R-Mineola) amended the bill to clarify that a district cannot assign a teacher to a full-time virtual program unless the teacher agrees to it and the assignment is specified in their employment contract. Sen. Angela Paxton (R-McKinney) amended SB 226 onto the bill, which would require educator candidates to receive instruction in virtual teaching. Sen. Lois Kolkhorst (R-Brenham) added SB 348, which would allow parents to observe virtual instruction.

As of 10 p.m. Wednesday night, the Senate was still considering bills on the floor. Stay tuned to Teach the Vote for updates.