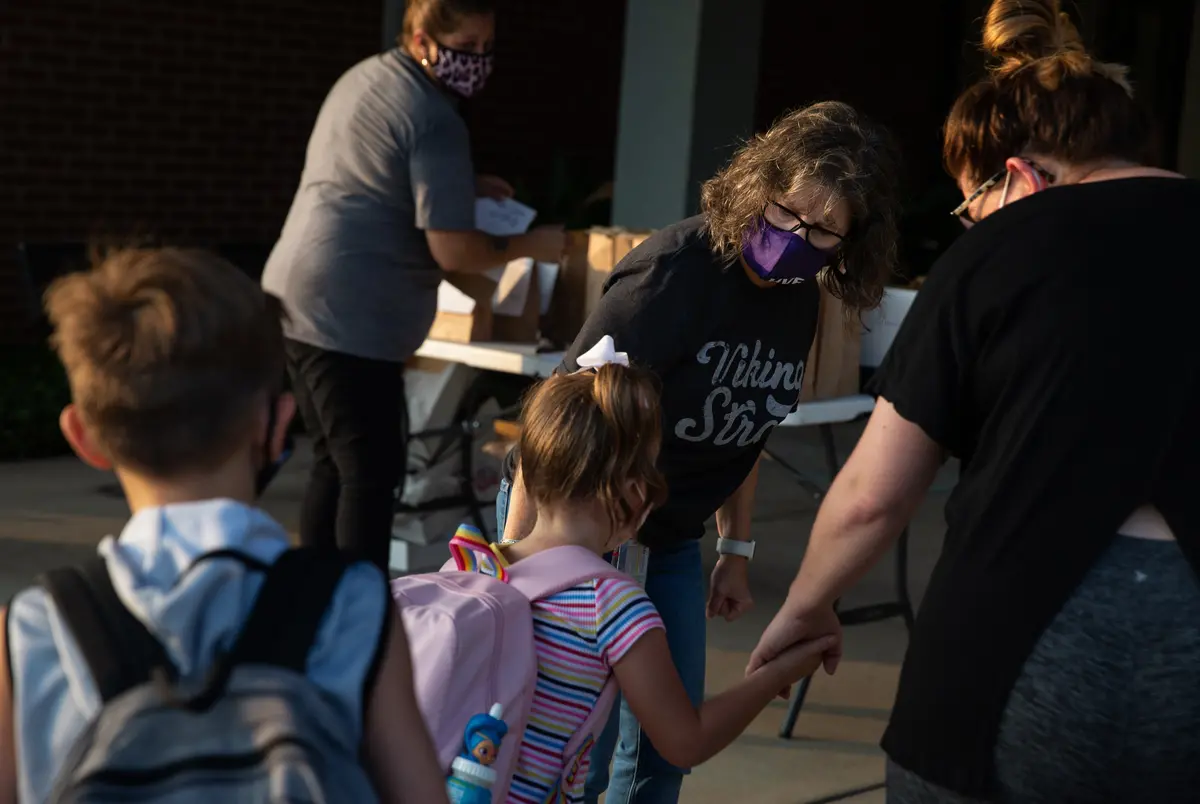 Students at a North Texas elementary school are welcomed on the first day of classes in 2020. Educators across the state frequently say requirements for the state’s school marshal program can be arduous on top of the myriad responsibilities they have in and out of the classroom, according to the Texas School Safety Center’s director. Credit: Shelby Tauber for The Texas Tribune

From The Texas Tribune: Texas Republicans want to arm more school employees, but few districts are opting in

"Texas Republicans want to arm more school employees, but few districts are opting in" was first published by The Texas Tribune, a nonprofit, nonpartisan media organization that informs Texans — and engages with them — about public policy, politics, government and statewide issues.

Nearly a decade ago, Texas lawmakers created the school marshal program, a way for educators to carry weapons inside schools. It was the state’s rapid-fire legislative response to an unthinkable national horror 2,000 miles away when 20 first graders and six adults were shot and killed in a Sandy Hook, Connecticut, classroom just before Christmas 2012.

“Whoever is serving as the school marshal acts immediately,” state Rep. Jason Villalba, R-Dallas, said at the time, explaining how his bill would protect Texans in active shooter situations. “The whole point of this is to reduce response times from minutes down to seconds.”

The legislation empowers school districts to identify employees with a license to carry a firearm to volunteer as school protectors. Those individuals would undergo an 80-hour training and psychological exam, granting them access to a gun on campus. It is otherwise against federal law to have a firearm in a school zone.

But since the bill’s passage into law in 2013, just 84 school districts have opted into the program, a sliver of the more than 1,200 school districts across the state. Of those districts, only 361 people have ever become a licensed school marshal across a state that has 9,000 campuses and more than 369,000 public school teachers.

Now, as Texas grapples with the Uvalde school shooting in which 19 children and two teachers were killed by an 18-year-old gunman wielding two assault rifles, state leaders are again pointing to the school marshal program as a way to improve school security.

“In the wake of this devastating crime, we must redouble our efforts to ensure that our schools provide a safe and secure environment for the children of Texas,” Abbott wrote.

Since the shooting in Uvalde, the Bosque County sheriff has requested school districts in his county just northwest of Waco adopt the program. Meanwhile, the Texas Commission on Law Enforcement, also known as TCOLE, which oversees the program, has seen an uptick in the number of requests for information about it since the shooting, a spokesperson for the licensing agency said Friday.

Yet education advocates argue that the fact that the voluntary school marshal program has had so few takers over the years signals that school districts and teachers are not interested in leaning on educators to deter mass shooting events.

“If we have a school marshal program already and districts are not taking advantage of it, maybe it makes more sense to figure out why districts don’t want to do that rather than push another opportunity,” said Jayne Serna, a veteran Austin-area secondary school teacher who now teaches at Austin Community College.

Pre-kindergarten teacher Michelle Cardenas says safety is one reason she is not interested.

“I don’t want a gun around my students,” she said. “We already have to pay for our own professional development and our own school supplies. There’s no money, but yet they’re going to find money to train and arm teachers?”

But Villalba, who is no longer in the Legislature, blamed the low participation on the state’s decision not to allocate funding for the marshal program to help districts purchase the firearms or provide stipends to marshals. He also said the state did not properly educate districts that the option was available.

“I’m heartsick that we haven’t implemented this plan in a more robust fashion,” he told The Texas Tribune. “Unfortunately, it takes a catalyst like Uvalde and Santa Fe before action is taken. Hopefully this will be a moment when the state decides to mandate a program and provide necessary funding to pay for it.”

School marshals by the numbers

TCOLE, the agency that both oversees the school marshal program and provides training for it, is legally prohibited from releasing the names of the districts that have school marshals. Only a parent can make a written request to their child’s school to find out if there is a marshal on campus.

Instead, the agency releases the number of school districts that have a marshal. When the program began, schools could have one marshal for every 200 students. Between 2013 and 2017, the state expanded the program to allow public junior colleges and private schools to utilize school marshals.

Yet at the start of the 2017 school year, only 21 school districts were employing a total of 32 marshals.

A few months later, 26 people were killed in a church in Sutherland Springs. Six months after that, eight students and two teachers were shot and killed in a high school in Santa Fe.

By the start of the 2018 school year, the number of school districts with at least one school marshal inched up slightly to 39.

As lawmakers convened in Austin in 2019, Abbott included increasing the number of marshals among his recommendations to improve school security.

That same year, state lawmakers eliminated the cap on the number of marshals a school district could appoint at a single school.

Zeph Capo, president of the Texas chapter of the American Federation of Teachers, said the incremental increases make it clear that it has very limited appeal.

“Nothing has changed,” he said. “As a matter of fact, it continues to become a solid position that educators don’t want to take responsibility for being police officers or take on responsibility to deal with the other 364 days that they have loaded weapons in a classroom with 30 children.”

Kathy Martinez-Prather, director of the Texas School Safety Center, said she often hears from districts that the 80-hour training and other required steps can be arduous for teachers to maintain on top of the myriad other responsibilities they have in and out of the classroom. School marshals must renew their license every two years.

The governor’s office did not respond to questions about either the school marshal program’s historic low participation rate or whether changes to it were in the works following the Uvalde shooting. But Texas Senate and House leaders have organized committees at Abbott’s request to consider ways to address firearm safety, school safety, mental health, social media and police training.

In 2020, the Texas School Safety Center, which provides research and best practices on school safety to school districts, conducted an audit of district’s emergency operations plans and found more school districts are turning to a program that requires fewer hours of training, outside of the state’s regulatory purview.

This “guardian plan” allows anyone designated by a local school board to carry firearms on campus, including staff. But instead of going through TCOLE and taking 80 hours of specialized firearms training, “guardians” training is determined by local school boards.

This plan was born in the wake of two other mass shootings: the Virginia Tech shooting in 2007, where 32 people were killed, and the 2006 shooting at an Amish school that killed five students.

In 2007, Harrold Independent School District Superintendent David Thweatt convinced his school board near Wichita Falls to first approve a policy that allows him to start arming staff in his rural schools as a way to protect campuses in areas where law enforcement might be 15 to 20 minutes away.

Since then, the program has spread to 280 school districts across the state as of 2020, according to a Texas School Safety Center audit of 1,022 public school districts. Fayetteville Independent School District, a rural district halfway between Austin and Houston, implemented the guardian program in 2018.

In Fayetteville ISD, Superintendent Jeff Harvey said the district added the guardian program instead of the more heavily regulated marshal program because it allowed the district to designate a variety of people outside of school staff to be guardians. He requires monthly target training and a psychological exam.

While the district has not had to use the guardians, Harvey said a few years ago it received a tip that a suspicious individual was approaching a campus. They initiated a shelter-in-place order and deployed guardians across the campus.

“It turns out no one came toward the school, but we were prepared and ready,” Harvey said. “It felt really good having the program in place at that time and how well it performed in terms of readiness for that specific encounter.”

In a state as large and diverse as Texas, he said it’s impossible to find a “one size fits all” program for all school districts. But he feels local leaders should decide what works best for their students.

“We’re independent school districts for a reason. Because we know what’s best for our individual districts and I think it’s imperative we have that ability,” he said.

While the Texas School Safety Center doesn’t provide guidelines to districts about how to implement the school marshal or the guardian program, Martinez-Prather with the center told the Tribune that it does advise school districts that they should consider possible risks that can come with arming staff on a campus.

“When an officer shows up to the school and there’s a shooting, and you have a firearm, they’re not going to ask you if you’re a guardian,” Martinez-Prather said she tells school districts. “They’re there to neutralize the threat.”

Harvey, the Fayetteville ISD superintendent, said it’s established a way for law enforcement to identify guardians on campus but declined to provide details.

Aaron Phillips teaches first grade in the Amarillo Independent School District in the Texas Panhandle, which he called a more “firearm-friendly” area of Texas. It’s unclear if Amarillo ISD has a school marshal or guardian program, but board policy does allow teachers and staff to keep a firearm in their vehicles.

He said he thinks people’s positive opinions about programs like arming teachers are based on “feelings” rather than reality.

“I think it makes people feel like, ‘Oh, we’re safe because there’s a gun on campus,’ without any accounting of the fact that this actually happens,” he said. “If we’re going to be next, then there’s zero reaction time and the absolutely worst happens so quickly that you have no time to go unlock your gun and stop the number of lives from being lost.”

In 2019, New Mexico State University public health professor Jagdish Khubchandani and James Price at the University of Toledo took a look at school security practices and their effectiveness.

They found no evidence that more armed teachers reduced gun violence in schools.

“Armed school personnel would have needed to be in the exact same spot in the school as the shooter to significantly reduce this level of trauma,” the researchers wrote. “Ten seconds is too fast to stop a school shooter with a semiautomatic firearm when the armed school guard is in another place in the school.”

For Phillips, the broad calls from Texas Republicans to increase school security in the wake of the Uvalde shooting is a “cop out.”

“It allows politicians to say, ‘we’re doing something even though they’re really not doing anything and ignore all the real solutions in favor of just lip service,” he said.