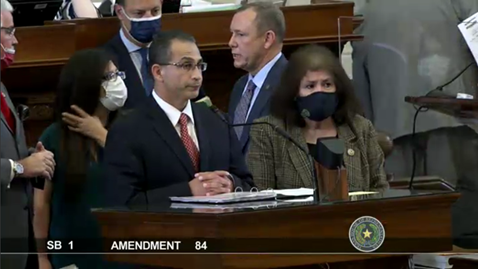 The Texas House spent just over 12 hours Thursday, April 22, debating more than 100 amendments to the proposed state budget for the next biennium. The House floor amendments to Senate Bill (SB) 1 by Sen. Jane Nelson (R-Flower Mound) included numerous school-related provisions, some requested by ATPE and other public education stakeholders. The House gave final approval to its amended version of SB 1 last night after House Appropriations Chairman Rep. Greg Bonnen (R-League City) thanked the subcommittee chairs and others who worked on the budget. The House's vote on the budget was unanimous.

The ATPE Governmental Relations team provides a rundown of top education-related amendments considered last night, including any recorded votes, which we caution are not yet official.

The House debated multiple budget amendments related to the federal emergency relief funds approved by the U.S. Congress that have not yet distributed to Texas public schools.

As it has done in other recent legislative sessions, the House approved a budget floor amendment to prevent state funding of private school vouchers.

ATPE urges educators to contact their legislators, especially in the Texas Senate, urging them to keep these improvements to the budget in SB 1. It is also important that educators continue to push for rapid distribution of federal COVID-19 relief funds to the school districts that need them. ATPE members can visit Advocacy Central to quickly send messages to or call their lawmakers about these issues.

Read ATPE's press statement about the House budget vote here. Stay tuned to Teach the Vote for updates.
Previous
Next