The Texas House and Senate adopted rules this week to govern the operation and procedures of each chamber through the 140-day legislative session. Barring policies and procedures already established in the Texas Constitution, the rules dictate everything from committee processes to how speeches and debates are conducted on the floor of the chamber. One House member even proposed a rule, unsuccessfully, to prohibit the wearing of blue jeans!

On Thursday, Rep. Todd Hunter (R-Corpus Christi) presented the House’s initial set of proposed rules in House Resolution (HR) 4, which largely kept the same traditions as in former sessions apart from special provisions to accommodate the new challenges of the pandemic.

A number of floor amendments were considered, all but one of which failed to be adopted. Hunter introduced the first aand only adopted mendment to HR 4, which included eliminating a proposed “consensus calendar” aimed at creating a workaround to advance non-controversial bills without requiring them to be heard and approved by a House committee. Among other things, the amendment also eliminated a new procedure that would have forced committee chairs to allow any testimony requested by committee members.

Following the adoption of this initial amendment, the House spent several hours considering various other amendments, many of which related to the upcoming redistricting process. Upon adopting the rules, the House adjourned until January 26. 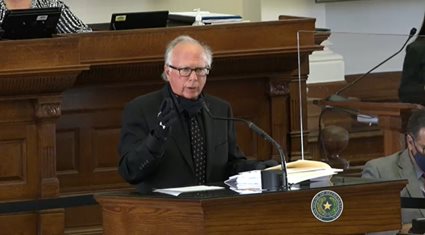 At the end of the day's proceedings,Rep. Hunter made a statement to his colleagues about Capitol public access and safety. He noted that House members have discretion within their own offices on matters such as mask-wearing, social distancing, and whether a negative COVID-19 test will be required for entry. Additionally, all guests of the Capitol have the option to get tested for the virus at no cost. Hunter’s tenor on the matter reflected his earlier opening remarks on the rule changes related to the pandemic in which he told fellow state representatives, "The key is respect. The key is courtesy."

The Texas Senate adopted rules governing its chamber and offices on Wednesday by way of a resolution authored by Senate Administration Committee Chairman Bryan Hughes (R-Mineola). The most significant change came at the instruction of presiding officer Lt. Gov. Dan Patrick (R), who asked Republican senators to change the threshold for bringing a bill to the floor for consideration.

For nearly 70 years, the 31-member Texas Senate required the approval of two-thirds of its members in order to bring a bill to the floor. The purpose was to ensure that a majority of the chamber – whether that be members of one political party, those representing urban or rural areas, or other combinations – would be prevented from running roughshod over the minority. The effect of the two-thirds rule was that for the better part of a century, the Texas Senate stood as a bulwark against the type of hyperpartisanship and discord that has come to characterize its counterpart in Washington, D.C.

In one of his first actions as lieutenant governor in 2015, Patrick lowered the bar to three-fifths, which gave the Republican majority in the Senate the ability to pass bills without the support of a single Democratic member of the chamber. After Democrats gained additional seats in 2018 and 2020, Patrick announced his intent to lower the bar again to 18 votes – which equals the number of Republicans currently serving in the Senate.

The Senate on Wednesday approved Patrick’s requested change along a party-line vote of 18 Republicans and 13 Democrats. The new rule sets the bar from bringing a bill to the floor at five-ninths, or 18 votes, ensuring Republicans will again have the ability to pass legislation without the support of a single Democratic senator.

The Senate also approved rules regarding COVID-19 protocols for the first two months of session. Members, staff, and the public will all be required to test negative for COVID-19 before entering the Senate each day. This applies regardless of whether a person is watching from the gallery or working on the Senate floor. Tests are provided each day free of charge on the North lawn of the Texas Capitol.

A negative COVID-19 test will also be required to attend Senate committee hearings. Each senator will have discretion as to whether to require a negative COVID-19 test for admittance into their own office. Asked by Sen. John Whitmire (D-Houston) whether virtual testimony will be permitted by Senate committees, Hughes said that question will be addressed later when COVID-19 protocols are reassessed after the first 60 days of the session.

After adopting its rules, the Senate also adjourned until January 26.
Previous
Next