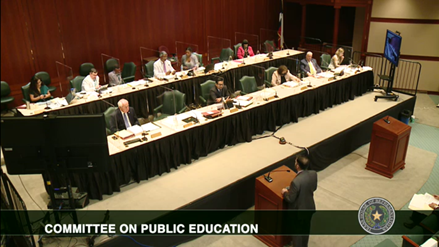 Among the bills heard Tuesday were several that ATPE opposed or recommended changing significantly:

On a more positive note, ATPE Senior Lobbyist Monty Exter, pictured above, testified during Tuesday’s committee hearing in support of HB 3804 by Lozano (R-Kingsville), which would reduce and streamline the continuing professional education (CPE) requirements for educators, principals, and counselors. Among other things, the bill would also require SBEC to create a clearinghouse that includes recommendations regarding subjects and frequency of CPE and other training. This bill is the product of a teacher workgroup convened by the lieutenant governor’s office during the interim, for which Exter was one of the subgroup leaders. An identical companion bill, Senate Bill (SB) 1267 by Sen. Royce West (D-Dallas), will be heard Thursday by the Senate Education Committee.

Here’s a rundown of all the other bills heard by the House Public Education Committee during its lengthy April 6 meeting: The House Public Education Committee will meet again Wednesday, April 7, to vote on pending bills. As the session progresses, votes are occurring frequently, and lawmakers need to hear from their constituents. ATPE members are encouraged to visit Advocacy Central to send messages to their lawmakers about key legislation. Stay tuned to Teach the Vote for updates.
Previous
Next