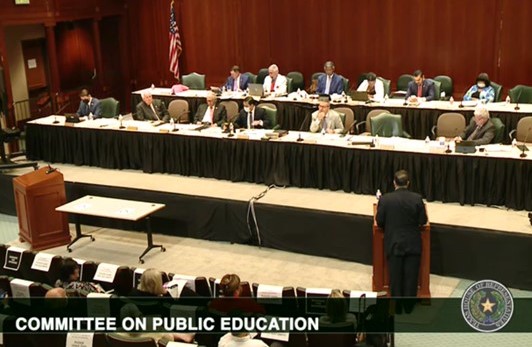 The Texas House Public Education (HPE) Committee held a lengthy meeting Tuesday, August 24, 2021, its first since the regular legislative session, after enough members returned last week to achieve a quorum in the House.

At the start of the meeting, Senate Bill (SB) 3 by Sen. Bryan Hughes (R-Mineola), relating to civics curriculum and teaching, was removed from the hearing agenda. The ATPE-opposed bill expands upon a controversial civics curriculum bill, dubbed a ban on teaching “critical race theory,” which the Legislature passed during the regular session – House Bill (HB) 3979 by Rep. Steve Toth (R-Conroe). The committee did hear a related bill, Rep. Toth's HB 28 on Tuesday. Rep. Toth presented a committee substitute version of HB 28 that merges the concepts of his bill as originally filed and the Senate bill that was removed from the committee’s agenda, SB 3.

HB 28 (the committee substitute) requires the Texas Education Agency (TEA) to establish a civics training program for certain social studies teachers, which was a provision stripped from HB 3979 during the regular session. The bill also eliminates many of the curricular standards added by the Texas House to HB 3979. HB 28 mandates that every teacher post on a monthly basis a full list of instructional materials and resources used in each of their classes. This would be in addition to the requirement already in law that a teacher provide those materials to parents upon request. Many witnesses testified Tuesday about how burdensome the bill would be for teachers, and a number of representatives on the committee seemed to share those concerns.

According to Rep. Toth, future changes to HB 28 will include removal of a highly questionable aspect of HB 3979, which stated that “a teacher may not be compelled to discuss a particular current event or widely debated and currently controversial issue of public policy or social affairs,” and that a teacher who chooses to discuss such topics must “to the best of the teacher ’s ability, strive to explore that topic from diverse and contending perspectives without giving deference to any one perspective.” That component of HB 3979 raised questions on whether teachers would even be able to comply with existing requirements to teach the TEKS, which specifically reference using current events as part of the curriculum. Many committee members expressed confusion over what the bill would or would not allow teachers to do, and the bill’s author was unable to provide clear answers.

As with HB 3979 during the regular session, ATPE opposes HB 28 because it usurps the role of the State Board of Education (SBOE) in setting curriculum standards with educator guidance and attempts to dictate pedagogical practices. Going a step further, HB 28 would micromanage teachers by creating an overly burdensome paperwork requirement that is unnecessary because parents already have statutory access to teaching materials. Testimony on HB 28 lasted several hours, after which the bill was left pending. Read ATPE’s written testimony against HB 28 here.

noted that changes would be made to it on the House floor. He shared that the perfecting amendments will include enabling districts to receive retroactive funding if they have already been implementing virtual education options and additional parameters, such as requiring that participating students earn a C or better and are performing on grade level.

Texas Education Commissioner Mike Morath also addressed the committee to provide information and take questions regarding virtual education. Morath shared that, overall, Texas lost a decade’s worth of academic gain in mathematics proficiency due to pandemic. Districts that were predominately in-person experienced almost no decline in reading proficiency and much smaller declines in mathematics proficiency than districts that had 25% or less of students in-person. Commissioner Morath also provided support for provisions in SB 15 that prevent concurrent instruction or “roomie-zoomie” teaching, in which teachers instruct both virtual and in-person students at the same time.

ATPE opposes SB 15 because it expands full-time virtual options without properly studying it first, potentially creating a policy framework for future sessions that does not serve students well. Virtual education already has a poor track record in Texas, long before the pandemic provided additional data that in-person settings do more to promote academic achievement.

ATPE Senior Lobbyist Monty Exter testified against the bill, sharing that a recent survey of ATPE members showed educators do not want virtual schools to be expanded as proposed by SB 15. Exter argued that districts can already implement virtual education programs using a variety of funding sources, such as federal emergency funds. The Legislature could also use the budget process to authorize districts to receive funding for students who participate in virtual education, just as they do for students who learn in-person. Exter further argued that it is prudent to respond to the current emergency, while deferring future policy changes to the virtual education framework until lawmakers see the recommendations of the new Texas Commission on Virtual Education. Read ATPE’s written testimony here. ATPE also signed on to joint testimony with Educate Texas opposing a provision in SB 15 that allows educator candidates to satisfy certification requirements through virtual means.

After hearing public testimony, the HPE committee immediately approved SB 15 with 9 ayes, 1 nay (Allen), and 3 absent members (Gonzalez, Meza, and Talarico). The bill will need to be set on a House calendar for consideration by the full House.

The HPE committee also heard the ATPE-supported SB 9 by Sen. Joan Huffman (R-Houston) during Tuesday’s meeting. The bill is a refiled version of SB 1109 from the regular session, which ATPE also supported, that was vetoed by Governor Abbott during the regular session. The bill would call on the SBOE to require students to receive instruction through the health TEKS on the prevention of child abuse, family violence, and dating violence. SB 9 was left pending.

Finally, the committee heard SB 2 by Sen. Charles Perry (R-Lubbock). The bill would require that University Interscholastic League (UIL) teams prohibit students from competing in events that do not align with the student’s biological sex assigned at birth, unless the student is a female who wants to participate in a male event that does not have an available female equivalent. ATPE opposes SB 2 because it creates an unfunded mandate and substantial new burden for school districts and public charter schools to collect and maintain additional paperwork and incur costs associated with providing female students with equivalents to male events that are not available to females. Testimony on SB 2 went well into the early morning hours on Wednesday and the bill was also left pending.

Stay tuned to Teach the Vote for updates on upcoming committee meetings and action on education legislation throughout the special session.