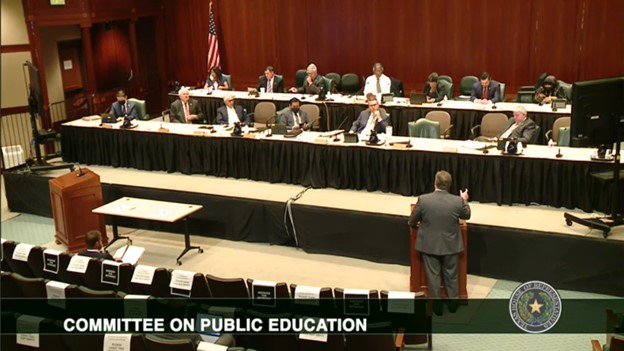 The Texas House Public Education (HPE) Committee met Monday, August 30, 2021, to hear three House bills, two of which are related to the ongoing debate over mask mandates in public schools. The committee heard and approved a third bill, related to modifying provisions of the accelerated instruction mandate bill, House Bill (HB) 4545, passed earlier this year during the regular session. Another meeting has been announced for Tuesday afternoon, during which the committee may vote on additional pending bills.

HPE Committee Chairman Harold Dutton (D-Houston) began the meeting Monday evening with HB 233 by Rep. Dan Huberty (R-Kingwood), which makes several changes to how the accelerated instruction requirements of HB 4545 are implemented. The measures within HB 4545 apply starting with this school year, and school district officials testified Monday night that meeting the requirements of the bill, such as a 30-hour tutoring requirement for students who failed their STAAR exam, are admittedly hard amid the pandemic. Rep. Huberty noted that the genesis of the bill was conversations with school superintendents. HB 233 would raise the student-to-teacher ratio for tutoring groups, limit the STAAR assessments that trigger accelerated instruction to only math and reading rather than all subjects, and give students an additional year to perform satisfactorily on their assessment before accelerated instruction is implemented. Rep. Huberty presented a committee substitute version of the bill that would also make the changes of HB 233 effective immediately.

Upon the conclusion of testimony, the committee approved HB 233 with 11 ayes and zero nays (Reps. Gonzalez and Meza were absent).

The committee then turned its attention to the two mask-related bills on the agenda, HB 164 by HPE Chairman Dutton and HB 141 by Rep. Jeff Leach (R-Plano). Both bills attempt to provide legislative clarity as multiple lawsuits swirl around the topic and many school districts are operating under local mask mandates despite Gov. Greg Abbott’s prohibition on such policies. The U.S. Centers for Disease Control and Prevention (CDC), American Academy of Pediatrics (AAP), and U.S. Department of Education have been clear in recommending that masks should be used in public schools. Some of the pending lawsuits involve complaints that the inability to implement mask mandates in public schools violates the educational rights of students with disabilities. The federal government recently announced civil rights investigations in some states that are prohibiting local mask mandates in schools, although Texas is not yet on that list due to the pending litigation.

ATPE has repeatedly called for local control over adoption of face covering policies so that school districts can meet student, staff, and community needs – whether that requires a mask mandate or not. Rep. Leach stated that his bill, HB 141, is intended to ensure that parents have the right to make masking decisions for their children. However, as committee members Rep. Steve Allison (R-San Antonio), Rep. James Talarico (R-Round Rock), and Rep. Mary Gonzalez (D-Clint) noted during the discussions, the school district knows its community the best, is the closest form of elected government to families, and should be trusted in making health and safety decisions. ATPE opposed HB 141 as presented during the hearing because it would strip local control by prohibiting any and all mask mandates for students in public schools.

ATPE submitted testimony in support of HB 164 as filed because it allows (not requires) districts to set face covering policies as they see fit. In a recent survey, ATPE members overwhelmingly agreed that the authority to set face covering policies should not rest with the Governor or Texas Education Agency (TEA). Rather, they desired that local school districts be allowed to set such policies. ATPE recommended to Chairman Dutton that he add language to his bill to clarify that districts may include exemptions in their local mask policies, such as for students or staff who are unable to wear a mask because of a disability or for situations in which a mask would need to be removed for certain activities such as eating.  Read ATPE’s written testimony on HB 164 for more detail.

Because of the conceptual overlap between HB 141 and HB 164, Chairman Dutton opened public testimony only on HB 164, which lasted into the night for over an hour. Both bills were left pending, though Chairman Dutton noted that he would collaborate with Rep. Leach in revising his bill language to try to reach a compromise that would allow for some exemptions.

Dutton closed the Monday night meeting by sharing his understanding that the Senate will not give final approval to a bill funding Article X of the state budget, which covers the legislative branch (House and Senate staff, the Legislative Budget Board, the Texas Legislative Council, etc.) unless the HPE Committee advances the “critical race theory” bill, HB 28, and the transgender student UIL bill, Senate Bill (SB) 2. Those two bills were heard in HPE’s meeting last week but left pending.

Just before adjourning the committee meeting Monday, Dutton said, “I want to see if he has his big boy pants on,” likely daring Lt. Gov. Dan Patrick to follow through on his threat to withhold a vote on the appropriations. Meanwhile, the full House adjourned for the day both Monday and Tuesday without debating HB 5 that is on its calendar and would provide for the legislative branch funding as well as the money to pay for a 13th check for TRS retirees, which the Legislature approved with its passage of SB 7.

A formal meeting of the HPE committee has been set for Tuesday, Aug. 31, at 4 p.m., though it is unclear which bills will be brought up for a committee vote and whether there will be new language offered for a bill regarding local mask policies. Stay tuned to Teach the Vote for updates on any new developments.