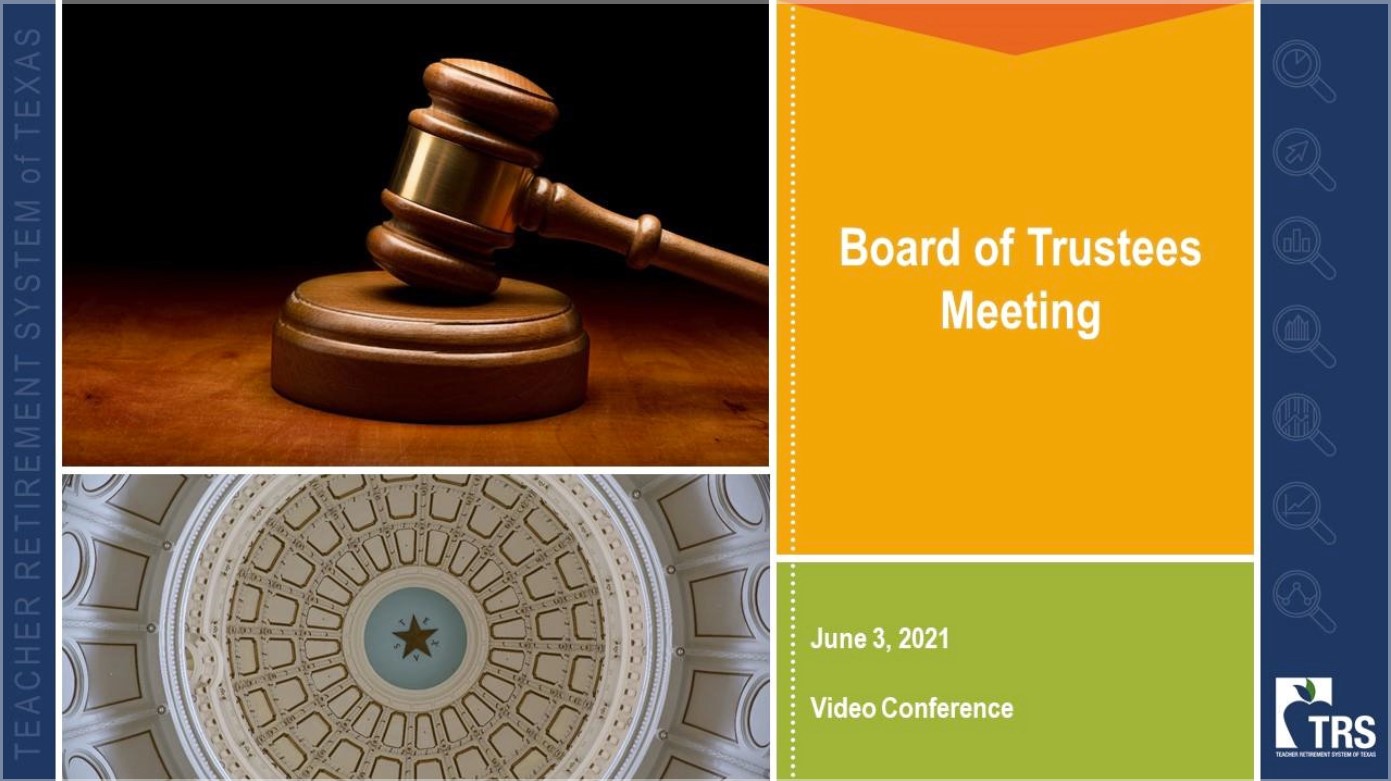 The TRS Board of Trustees held a special meeting June 3, 2021, following the close of the 87th legislative session, to receive an update on bills passed, appoint an interim ombuds, consider a process for hiring a permanent ombuds, and set rates for TRS-ActiveCare.

The board heard public testimony from two people: First, a retiree spoke about his and other retirees’ disappointment at the failure to pass a cost-of-living adjustment (COLA) during the recent legislative session and made a persuasive argument for the need and benefit of a COLA. The second comment came from a Texas Retired Teachers Association (TRTA) spokesperson who expressed gratitude for the smooth passage of the TRS sunset bill, especially during an otherwise turbulent session, as well as for the agency’s quick turnaround on implementing the new ombuds program.

After public comments, TRS Executive Director Brian Guthrie updated the board on the legislative session. He shared that 7,146 bills were filed, and 1,075 of those passed and were sent to the Governor. He highlighted the budget, Senate Bill (SB) 1 by Sen. Jane Nelson (R- Flower Mound), which included the funding increases called for by last session’s SB 12, as well as funding for 25 additional full-time TRS employees (FTEs) and a regional office in El Paso; the TRS Sunset Bill, House Bill (HB) 1585 by Rep. Stan Lambert (R-Abilene); HB 2022 by Rep. Drew Darby (R – San Angelo), dubbed the “golden ticket” bill; and SB 1444 by Sen. Larry Taylor (R – Friendswood), which closes the District of Innovation (DOI) loophole that allowed districts to offer both TRS and a secondary health insurance plan. The gubernatorial veto period ends June 20. There will be at least one special session, and probably two. However, it is not likely that either session will directly impact TRS.

Next, Guthrie transitioned into a conversation about the new ombuds position authorized by the TRS sunset bill. The board will consider and likely adopt amendments to the board’s bylaws necessary to incorporate this new position at the July meeting. Chairman Jarvis Hollingsworth informally asked that board members let TRS staff know if they would like to be on a subcommittee to select a permanent ombuds, likely at the September board meeting. After a brief discussion on using the term “ombudsman” versus “ombuds,” the board appointed current board secretary Katherine Ferrell as the interim ombuds and authorized TRS staff to move forward with hiring a permanent person for the position.

Before turning the meeting over to , Guthrie took a deeper dive into HB 2022 and SB 1444, which both impact TRS healthcare offerings.

Next TRS Chief Healthcare Officer Katrina Daniel presented statistics, which can be found in the board meeting materials, about the TRS-ActiveCare cost over time, regional information, and current rate increase and benefit changes.

Click on the graphics above to view a larger version.

View archived video of the full board meeting here.

Very thankful for SB 1444 to give stability to the system. Once again, though, we’re scrambling to see how to pay more at the district level so staff can actually realize some of their salary increase instead of it being eaten by the increase in premiums.