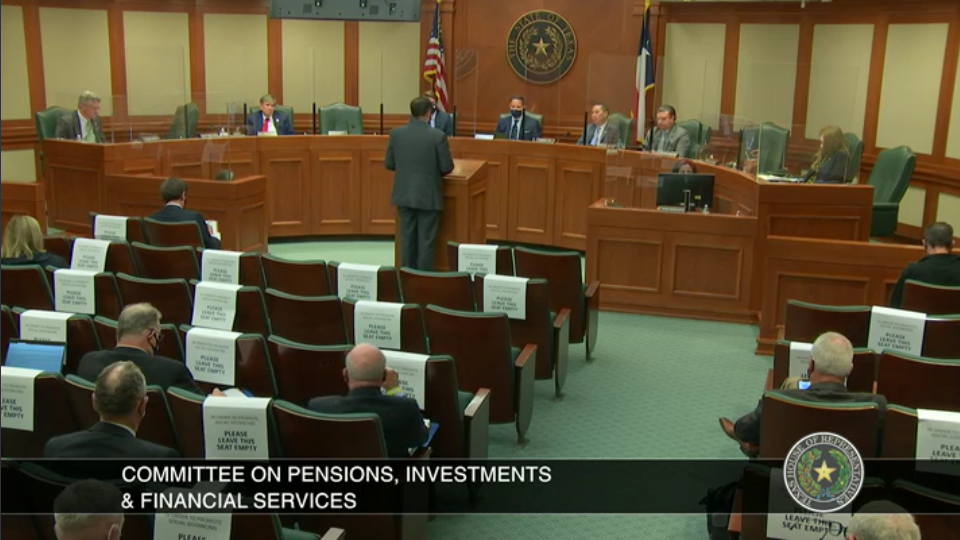 The Teacher Retirement System (TRS) Board of Trustees held its regularly scheduled meeting this week. Among its agenda items, the board discussed the impact of the District of Innovation (DOI) law on TRS-ActiveCare costs and passed an emergency rule to facilitate the use of retirees to staff schools over the summer, aimed at helping school districts mitigate COVID-19 learning loss.

TRS Chief Healthcare Officer Katrina Daniel reported to the board on a trend the agency has been tracking that could have a negative impact on TRS-ActiveCare rates. A growing number of school districts are using the DOI law put in place by the Texas Legislature a few years ago to exempt themselves from the Texas Education Code’s prohibition on offering both TRS-ActiveCare and a competing health insurance plan for employees. The number of districts that have sought this exemption has grown in just a few years from fewer than five to more than 50. The concern is that where these competing plans are available, the district’s healthier, cheaper-to-insure educators tend to leave the ActiveCare system, according to TRS data, while less healthy, and therefore more costly to insure, educators have remained with TRS. The agency claims this is because ActiveCare coverage is typically more robust, but also more expensive, than the competing plans being offered by some districts.

In other words, educators who regularly use their health insurance are staying with TRS while those who do not utilize the coverage as much are moving to the cheaper plan. Regardless of the reasons, the impact is an increased cost-per-person for the TRS healthcare plan. Because the state pays a fixed rate toward active teachers’ health insurance, any increase in the cost of providing healthcare to the ActiveCare population is passed along to the educator. This means that as the per-person cost of ActiveCare goes up, so too will ActiveCare rates. TRS projects that if the Legislature does not fix the DOI issue this session, next year’s rates could jump 7% or more beyond otherwise expected increases.

At the request of the Texas Legislature, the TRS board also adopted an emergency rule this week to expand the definition of “substitute” to include, “temporary employment of a service retiree by a school district that is only expected or contracted to last for Summer 2021.” This change will help school districts seeking significant numbers of additional staff over the summer to begin the work of combating COVID-19 learning loss, as they can more effectively tap into the pool of retired educators with this change. TRS noted that the “revised definition is narrowly tailored to address the staffing emergency facing Texas school districts and this emergency rule will be limited to Summer 2021.” Because of the time-limited nature of the rule, TRS’s actuary determined that the temporary amendment will not have a detrimental impact on the pension fund. The emergency rule will become effective immediately after it is filed with the Secretary of State, and TRS will promptly begin communicating this change to employers and other stakeholders. The adopted rule will have the effect of waiving both the retire/rehire penalty for recent retirees and the TRS surcharge normally placed on districts when they employ a TRS retiree, regardless of how recently they retired. 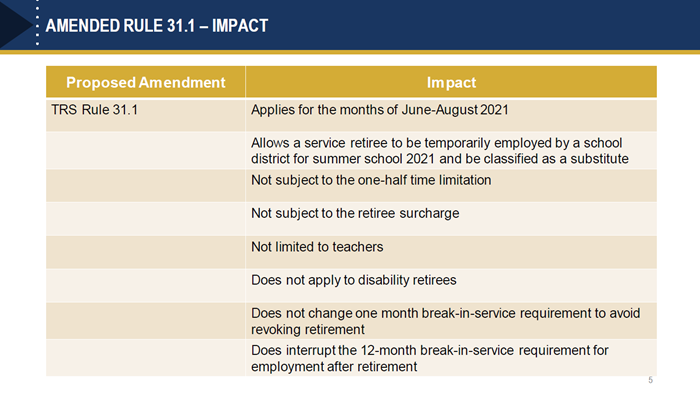 In other pension-related news, ATPE testified neutrally on HB 3929 by Rep. Diego Bernal (D-San Antonio) which was heard by the House Pensions, Investments & Financial Services Committee today. The bill would waive the retire/rehire penalty and the district surcharge when a district hires a retired teacher to serve in a special education teaching capacity. ATPE supports the waiver of the of the retire/rehire penalty for these educators, which would have very little impact on the pension fund. However, we expressed concern in our testimony that waiving the district surcharge would have a negative impact on the pension fund. We will work with the bill’s author and other stakeholders to ensure Texas can increase access to teachers for special education, which has been a persistent shortage area for the state, while also maintaining the health of the TRS pension fund for all current and future Texas Educators.

Finally, the Texas House this week passed the TRS sunset bill, HB 1585 by Rep. Stan Lambert (R-Abilene). The ATPE-supported bill heads now to the Senate for consideration. Read more about the bill’s proposed improvements for TRS in our previous blog reporting here.

Thank you for working for ALL educators.