Late last week, the Texas Education Agency (TEA) released data comparing Texas public school enrollment from October 2019 to October 2020, as well as data showing how many students were learning on-campus versus in a remote setting and how the number of students engaging in on-campus instruction had changed from September 2020 to October 2020.

The public school enrollment data comparison from October 2019 to October 2020 showed an overall decrease in enrollment by 3%, from 5,493,770 students in 2019 to 5,337,174 students in 2020. The majority of the decrease is disproportionately borne by the youngest Texas students, with 54% attributed to declines in early education, pre-K, and kindergarten enrollment. Early childhood and pre-kindergarten levels saw the highest declines, both at 22%. The decrease matches anecdotal and district-level data supporting the belief that parents have chosen to keep their youngest children home during the pandemic, some without providing any educational environment. While these three grade levels are not mandatory in Texas, education stakeholders are concerned that the lack of schooling for young Texans will result in widened gaps that will require more resources to fill in the future.

TEA also shared the breakdown of how many students in each grade were on-campus and how many were remote in October 2020. Overall, 2,873,693 students (54%) were on-campus and 2,463,481 students (46%) were remote. We presume the number of students on-campus is higher now, given political pressures and TEA’s insistence and use of funding authority to influence the matter. While the actual number of students in early education is quite small relative to other grade levels (14,339), the proportion of early education students on-campus is the highest of any grade level. The percentage of students on-campus in each grade level steadily decreases as students get older. Again, this is no surprise, as older students can stay home without parents and self-regulate in their studies with greater ease than younger students. 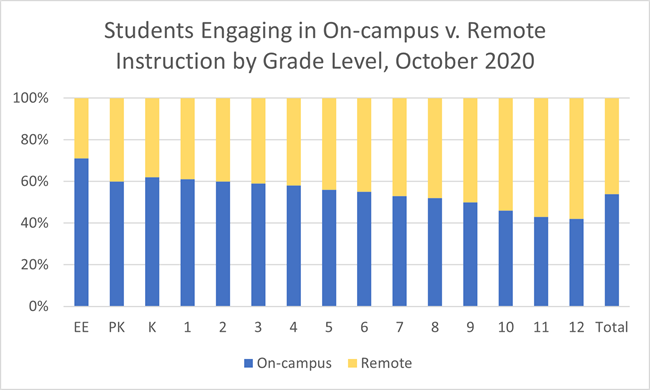 Lastly, TEA compared the change in on-campus versus remote instructional settings between September 2020 and October 2020, noting a 32% increase (700,000 students) in those attending school on-campus over the period. The increase is apparent across all grade levels, most notably in pre-k and tapering off in the high school grades. 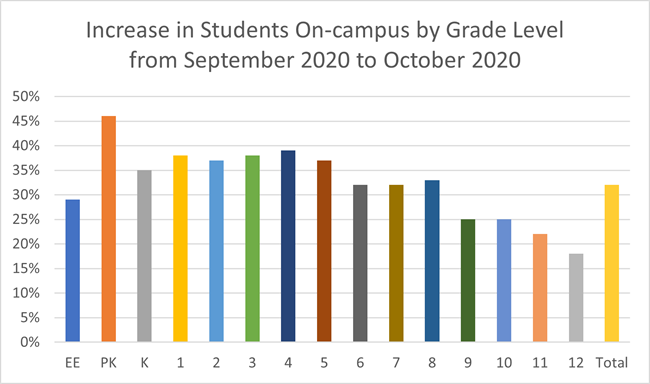 Enrollment likely looks much different in January 2021. The next update is expected to come late February and will be based off a January 29 data submission. To the satisfaction of those who looked at the October 2020 data and asked questions about demographic breakdown, the February report should include this additional information. TEA will release subsequent data in late April.