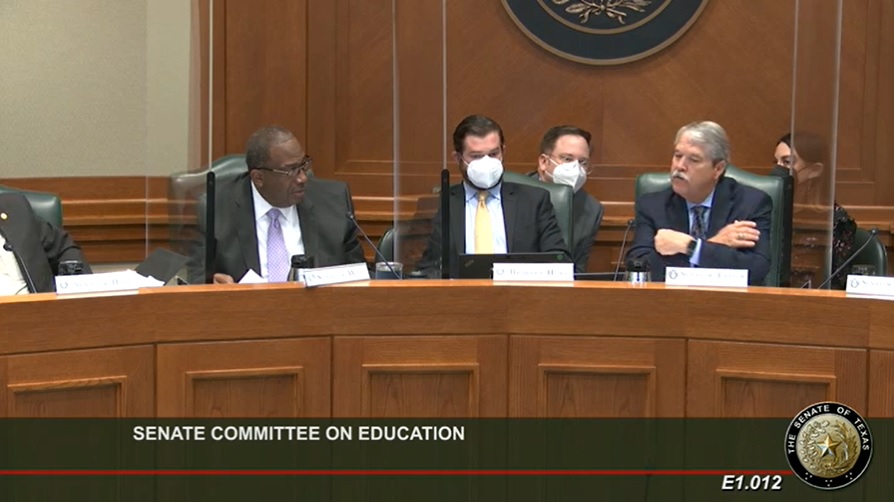 The Texas Senate Education Committee met Thursday, March 25, to consider a number of bills, including one that would eliminate voter input from the approval of new charter school chains.

Members voted Thursday morning to advance the first round of bills from the committee and on to the full Senate, including the following:

The committee spent much of the morning discussing CSSB 1365 by Sen. Paul Bettencourt (R-Houston), which is aimed at addressing issues in Houston ISD that led to a state takeover attempt. Members heard testimony by the Greater Houston Partnership in support of the bill, which would greatly expand the commissioner of education’s authority to launch investigations and take over control of school districts without the input of local voters. ATPE opposed SB 1365 because of the extent to which it would increase the powers of the unelected commissioner of education in ways that would carry a statewide impact, as opposed to being limited to HISD. Sen. Bettencourt submitted a committee substitute for the original bill that did not address this issue.

The committee heard a lot of testimony Thursday on SB 28, also carried by Sen. Bettencourt, which would greatly expand the ability of charter schools to proliferate without input from local voters and taxpayers. Currently, the unelected commissioner of education determines which charter school chains are allowed to operate in Texas. The State Board of Education (SBOE) provides voters’ only check on this process through a veto power that is found in current law. Charter applications were originally managed entirely by the SBOE, which comprises 15 members elected by Texas voters. Voters were largely cut out of the charter application process when it was consolidated under the commissioner’s office in 2013, and the SBOE’s authority over charter approvals was reduced to a simple veto.

Charter schools are not governed by locally elected school boards, not required to seek taxpayer approval through tax elections, and not required to hold open public meetings. The SBOE veto provides the sole remaining opportunity for Texas taxpayers to exercise input regarding the ability of prospective charter operators to access their tax dollars. SB 28 would eliminate the SBOE’s veto authority and limit the ability of local communities to control the location and manner in which charter schools operate. ATPE submitted testimony in opposition to SB 28 for these reasons. 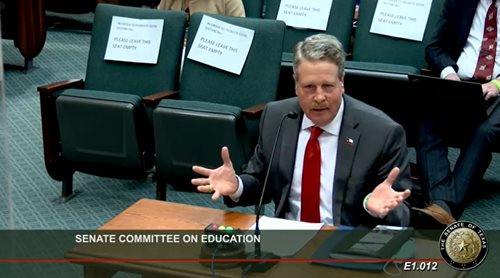 Several members of the committee pointed out the danger in moving oversight from an elected body to an unelected bureaucrat. SBOE Member Tom Maynard (R-Florence) testified on behalf of board Chairman Keven Ellis (R-Lufkin), and pointed out the SBOE’s judicious use of their veto over the past several years. In response to these concerns, Sen. Bettencourt announced Thursday afternoon that he is working on a committee substitute that will maintain the SBOE veto, however he suggested that the veto be changed from a simple majority, as is currently in the law, to requiring a supermajority of 10 members. This would be a significant departure from the way most SBOE votes are conducted.

Another bill considered by the committee Thursday was CSSB 1171 by Chairman Larry Taylor (R-Friendswood), which deals with the electronic administration of state-mandated standardized tests. SB 1171 specifies that no more than 75% of the points allowed in a test can be based on multiple choice questions. It would allow the commissioner to waive the prohibition on Monday testing enacted by the Legislature last year, and SB 1171 would require by default every STAAR test to be administered electronically unless otherwise specified in commissioner rule. Furthermore, the bill would open the Technology and Instructional Materials Allotment (TIMA) so that it could be used to purchase services, equipment, and tech infrastructure necessary to ensure internet connectivity and for training personnel in the electronic administration of the tests. SB 1171 would also establish a matching grant program to ensure schools have the necessary infrastructure for electronic testing. Chairman Taylor submitted a committee substitute to SB 1171 that would extend the grant program window by two years and said he is also working on bringing down the bill’s $30 million price tag.

The Senate Education Committee also heard testimony on the following bills this week:

We expect the committee to meet again next Thursday, April 1. Stay tuned to Teach the Vote for updates. As a reminder, ATPE members can find tools for contacting their legislators about these and other bills on Advocacy Central.