"School choice" in the spotlight as presidential election approaches 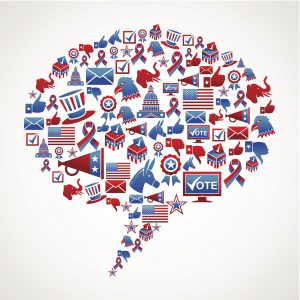 The 2020 general election is rapidly approaching, with early voting slated to begin in Texas just over six weeks from now on October 13. Now that the presidential slate of candidates has been finalized, the focus is shifting to the candidates' views on particular issues, including some related to education. One education-related issue, in particular, is being mentioned frequently.

President Donald Trump said Sunday, Aug. 23, he will make "school choice" a top priority if he is reelected for four more years in the White House. The Trump campaign followed up the next day with a 49-point bullet list that broadly outlines things the president hopes to do if reelected. The education section states, "Provide school choice to every child in America." During the Republican National Convention taking place this week, First Lady Melania Trump also used her Tuesday night speech to highlight the president's commitment to "fight for school choice to give parents the option to have their school flourish."

While "choice" is an enticing word, and there are choices of varying educational settings that exist within the public school system, the phrase "school choice" has been used by private school proponents to market the defunding and privatization of public schools. Whether described as "school choice" or with more specific verbiage, the goal has been diverting public taxpayer dollars to private and for-profit entities through vouchers, tax credits, school choice "scholarships," education savings accounts, and other initiatives. All of these proposals are designed to deny public schools the funding they desperately need to provide quality instruction to all students and transfer it instead to subsidize private entities that are not subject to state accountability standards, taxpayers, or voters. For many years, ATPE members have included a position in our Legislative Program expressing our association's opposition to private school vouchers or "choice" initiatives. Currently, the ATPE Legislative Program most recently approved by our House of Delegates in July states, "ATPE opposes any program or initiative, tuition tax credit or voucher system that would direct public funds to private, home or for-profit virtual schools."

This is not the first time President Trump has expressed support for privatization. "We're fighting for school choice, which really is the civil rights of all time in this country," the president said in a June 2020 speech about police reform and national protests over the killing of unarmed African-Americans. That same month, Trump accused schools of "extreme indoctrination" of children.

President Trump is also not the first to attempt to market private school vouchers by invoking the Civil Rights movement, despite the fact that vouchers originated as an attempt to avoid desegregation in the wake of Brown v. Board of Education. Lt. Gov. Dan Patrick (R-Texas) made the same civil rights argument for school choice in the 2017 legislative session and blocked attempts at providing needed resources for public schools by tying their funding to a school voucher bill. It was the push for privatization and the failure to address school funding in 2017 that led educators to dominate the 2018 midterm elections, which temporarily halted the push for vouchers in Texas and paved the way for the 2019 school finance legislation, House Bill 3.

While the president may be showing a renewed emphasis on privatization, it is not a new issue for his administration. Trump appointed wealthy GOP megadonor and privatization activist Betsy DeVos as U.S. Secretary of Education during his first year in office. DeVos faced criticism for her promotion of privatization in Michigan that resulted in a dysfunctional school system and the proliferation of low-quality charter schools. She has used her federal cabinet post to continue to push privatization, including using COVID-19 relief funds as an opportunity to promote private school voucher programs and to force public schools to spend an unprecedented amount of money on private school services.

As reported in in the Austin American-Statesman last month, Democratic presidential challenger Joe Biden's campaign has described his position on "school choice" as follows:

“Joe Biden opposes the Trump/DeVos conception of ‘school choice,’ which is private school vouchers that would destroy our public schools. He’s also against for-profit and low-performing charter schools, and believes in holding all charter schools accountable. He does not oppose districts letting parents choose to send their children to public magnet schools, high-performing public charters or traditional public schools.”

While ATPE does not endorse candidates, we encourage voters to learn more about their candidates' views on public school funding and private school vouchers or "choice" programs. Amid the COVID-19 pandemic and with the 2021 legislative session on the horizon, there have already been calls for expanding privatization initiatives right here in Texas. On Teach the Vote, we profile all candidates for the Texas Legislature and invite them to participate in ATPE's candidate survey, which includes the following question:

"Would you vote to create any type of voucher, tax credit, scholarship, education savings account, or other program aimed at paying for students, including any subpopulation of students, to attend non-public K-12 schools, such as private or home schools?"

We also track incumbent legislators' voting records, which have included votes on privatization bills in many prior legislative sessions. Use the search tool here on Teach the Vote to research your candidates' views on private school vouchers and other education issues ahead of the November 3 election.