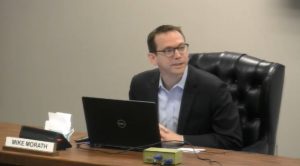 Commissioner Mike Morath testifies before the November 18, 2020 meeting of the SBOE.

Texas Commissioner of Education Mike Morath addressed the State Board of Education (SBOE) Wednesday morning at the board's November meeting. The commissioner updates the board at each meeting on various Texas Education Agency (TEA) initiatives. Many SBOE members at Wednesday's meeting voiced consternation over the planned administration of the STAAR this school year, as well as other concerns that echo what ATPE has been asking of Morath and other state officials.

Morath began his presentation this morning with a brief overview of the agency's legislative appropriations request (LAR), which is a formal document each agency submits to the incoming legislature outlining its recommendations for the next two-year budget. The agency's LAR includes $26.2 billion for the Foundation School Program (FSP), which directly funds public schools, as well as $164.6 million for the agency's administration. Spending on Titles I-VI totals $2.2 billion, along with $2.5 billion for nutrition and $1.1 billion for special education.

According to Morath, the agency has already executed a request from state leaders for all agencies to cut their spending by 5% in response to the economic recession. This cut is already included in the agency's LAR. The commissioner said the LAR includes one "exceptional item" requesting $10 million to attract and train effective and diverse educators and $10 million for targeted interventions and campus supports. Separate from state funding, Morath said the state had received roughly $2 billion in CARES Act funding, including $908 million in net new funding.

The commissioner also touted Schoology, which is learning management software (LMS) the state has purchased and made available to approximately 400 local education agencies (LEAs). The state has spent $64 million on Texas Home Learning, which is a virtual learning platform. Morath said 256 LEAs have registered to engage with THL content since June. Board Member Marisa Perez-Diaz (D-San Antonio) noted this is an engagement rate of only 24% of LEAs and suggested that CARES Act funding would be better utilized for more equitable, sustainable, and long-term supports that benefit all schools.

Outgoing Member Barbara Cargill (R-The Woodlands) pointed out that many teachers are thinking about leaving the profession because of the overwhelming increase in workload resulting from the combination of virtual and in-person classroom responsibilities. "What encouragement can we give them?" asked Cargill. Morath responded that what teachers need most is time. The commissioner stated the vast majority of schools are using a concurrent model, which makes teachers conduct both virtual and in-person instruction and requires twice the prep work. The commissioner noted that the agency has shared alternative staffing models with districts that could reduce the workload demands on individual teachers. Increased workload demands have been cited frequently by educators, including in a new comprehensive ATPE survey report released today.

Several members asked the commissioner about waivers or adjustments to STAAR administration for the 2020-21 school year. Member Matt Robinson (R-Friendswood) directly asked the commissioner to scrap this year's STAAR test. Morath indicated that the agency's plan is to apply for waivers for certain participation requirements in spring and that TEA is considering adjustments to the A-F accountability system. Yet Morath seemed to imply that there are no plans to cancel the test, despite the growing backlash against the high-stakes test.

Member Perez-Diaz pointed out that there is no reliable data this year with which to evaluate student progress. Member Pam Little (R-Fairview) asked whether schools could be allowed to use the measure of academic progress (MAP) instead of STAAR for accountability purposes. The commissioner suggested that approach is complicated by lack of consistent protocols or benchmarks, but that it was under consideration.

Member Georgina Perez (D-El Paso) asked whether TEA was considering easing up on teacher evaluation requirements, pointing out the difficulty of evaluating remote learning under the current system. Echoing a response to ATPE when our association similarly asked for a moratorium on appraisal requirements, Morath told Perez today schools already have flexibility on evaluations, but he said the agency will explore whether additional flexibility is needed.

Members also pressed the commissioner over his claim that schools are "remarkably safe environments" with regard to COVID-19. Perez-Diaz asked whether contact tracing was being conducted on campuses that could back up the claims that there isn't much spread in schools. The commissioner said the agency hasn't found evidence of underreporting by districts, despite many reports to the contrary. The commissioner conceded that identifying the source of transmission has proven to be difficult due to the level of community spread, but he pointed to data about the spread of COVID-19 in schools in other countries to justify his claim.

Member Ruben Cortez (D-Brownsville) pointed out that the Rio Grande Valley is home to 4.7% of the state's population, yet has experienced 18% of the state's COVID-19 deaths. Cortez shared reports that some 200 employees have tested positive for the virus in Hidalgo County schools and emphasized the importance of giving schools the flexibility to continue remote-only instruction while infections are spiking. Morath responded by suggesting that schools have existing flexibility.