The Texas State Board of Education (SBOE) met virtually Thursday for its scheduled April meeting. In compliance with the governor's social distancing executive order, the 15 members of the board met via Zoom videoconference to consider an abbreviated agenda spread over Thursday and Friday of this week. 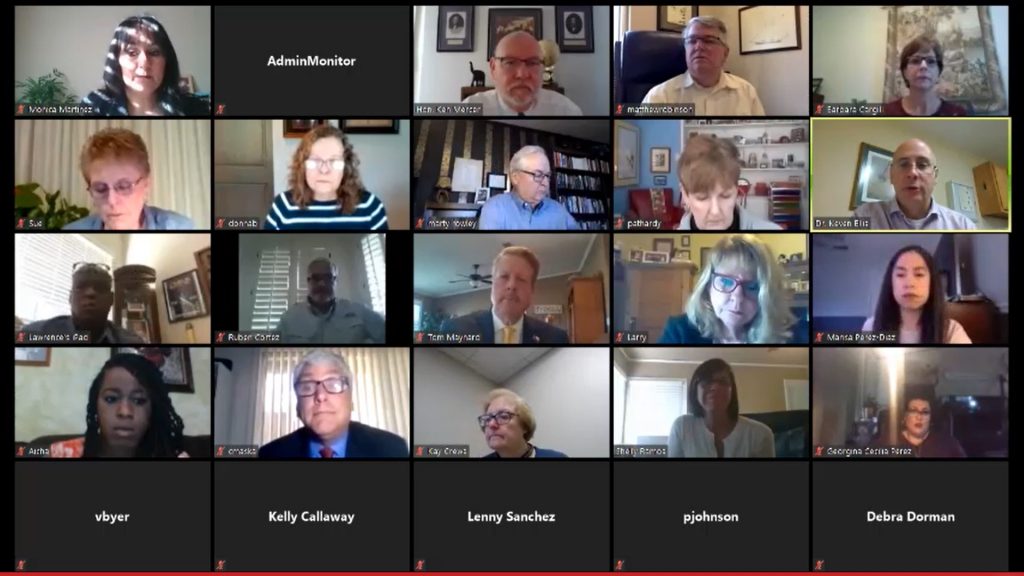 The SBOE's April 16, 2020, Zoom meeting was livestreamed to the public.

The board began Thursday by consolidating career and technology education courses as required by the legislature, which includes aligning graduation requirements and Texas Essential Knowledge and Skills (TEKS) standards.

Members then turned their attention to second reading and final adoption of TEKS for a new African American studies ethnic studies course. The board has been working on this course over the last few meetings and has expressed great interest in this project. Several witnesses offered written and video testimony with suggestions for this course, such as including authors James Baldwin and Toni Morrison as additional examples of important figures. This led to a debate over the appropriate balance of providing enough examples versus being overly prescriptive, as well as the process through which the currently proposed standards were developed. After spending several hours debating and amending the TEKS, the board voted to tentatively approve the course with an effective date of August 1, 2020.

Texas Education Agency (TEA) staff updated the board on federal Perkins funding, which the U.S. Department of Education has allowed the state to extend during the COVID-19 outbreak. The state's application will be submitted by April 29.

Members concluded the morning session with an update on current TEKS standards under review. The brunt of testimony focused on health education standards. The board's discussion of health and physical education TEKS scheduled for this week has been postponed to May due to logistical hurdles presented by COVID-19 social distancing requirements. Board Chairman Keven Ellis (R-Lufkin) said the agency is tentatively targeting the end of the second full week of May (May 14-15) or the beginning of the third week (May 18-19) for discussion, but acknowledged that it's difficult to predict when the agency will have the educator feedback necessary to present to the board. The review of high school biology, chemistry, IPC, and physics TEKS scheduled for March and April has also been postponed. This will in turn delay the review of the remaining high school science courses, as well as K-5 and CTE courses for science credit. Agency staff acknowledged that the transition to having TEKS review work groups meet virtually has posed a significant challenge and further delayed the process.

The board separated into its three standing committees for the remainder of the day. The Committee on School Initiatives discussed updates on the Generation 25 application for charter schools. A total of 96 entities showed up for this year's initial informational meetings. Of those, 22 submitted applications by the January 21 deadline, which is 11 fewer than the previous year. TEA advanced 16 applications to the review stage. The commissioner will propose applications to the SBOE in August for the board to either approve to disapprove in September.

Member Ruben Cortez (D-Brownsville) questioned the need for creating additional charter schools -- which are funded 100% by the state and reduce the money available to local independent school districts -- at a time when the state faces significant funding challenges as a result of the COVID-19 outbreak. Cortez asked TEA staff if the commissioner had yet to respond to a letter from education organizations including ATPE calling for a moratorium on new charter schools. TEA staff indicated they would follow up and share the commissioner's response with the board.

The committee also reviewed board rules determining the criteria for the board's veto of new applications and its ability to revoke a charter or place it on probation. Members discussed whether to amend its rules to place additional requirements on new charter applications, and whether it could do so without handcuffing its authority.

Members of the Committee on School Finance/Permanent School Fund (PSF) discussed the health of the PSF in the wake of market disruptions caused by the COVID-19 pandemic. The PSF is the state's investment account that helps fund public education and is managed by TEA under the oversight of the SBOE. The fund lost $2.7 billion in March, dropping to $31.7 billion from $34.4 billion. Despite this loss, agency staff reassured the board that the fund will be able to recover due to the long-term nature of its investment strategy. The agency said it will likely be another month before numbers will be available to compare the performance of the PSF to that of other peer funds.

The full board will gather virtually at 9:00 a.m. Friday to conclude its April agenda.