The Texas State Board of Education (SBOE) met today to conclude its April meeting, which was conducted virtually over Zoom and covered a pared-down agenda. 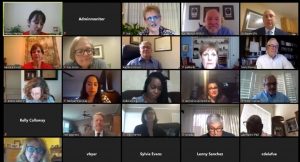 The 15 members spent the majority of their time Friday morning adopting final amendments to the state's first African American studies ethnic studies course. Members approved the new course by a unanimous vote and shared their excitement after completing months of work by the board and stakeholders. Freshman Member Aicha Davis (D-Dallas) was singled out by her colleagues for her role in shepherding the course to completion.

"It's so rich and it's something I wish I could have taken when I was young," said Davis, who thanked Chairman Keven Ellis (R-Lufkin) and former Chair Donna Bahorich (R-Houston) for getting the ball rolling, as well as the rest of the board members for each taking an active interest in the course. Davis reserved her most heartfelt thanks for her mother and for Member Georgina Perez (D-El Paso), who has served as a mentor.

"Y'all have made me a stronger woman," said Davis. "I just want more kids to have that strength and that empowerment, and I think that's what this course will do."

The course will award a half credit for completion, although some board members expressed their wish for a full credit course. Member Pat Hardy (R-Fort Worth) explained that a half credit course would allow more students to enroll.

In other actions, the board assessed liquidated damages worth $113,494 against Origo Education for persistent failure to comply with the rules of a contract to provide math instructional materials. Texas Education Agency (TEA) staff said the noncompliance issue, which involved a failure to provide matching large print and braille materials, did not result in a cost to districts. Staff indicated this is the first time the board has assessed damages against a publisher in this manner.

The company is operating under a six-year contract worth about $10.7 million. The board debated whether to assess the fine from the date the company was originally notified of noncompliance in 2016, which at the $1,000 contractual daily rate for liquidated damages would have increased the fine to $1.3 million. Staff voiced concern over defending the larger fine in court and argued that the more lenient fine would reduce the potential for a court to deem the fine unreasonable.

Member Sue Melton-Malone (R-Waco), who chairs the Committee on Instruction, said the company's president promised members in Thursday's committee meeting that the company would pay the $113,494 fine immediately upon receiving an invoice from TEA. The board set a payment deadline of June 1, 2020.

Committee on School Finance/Permanent School Fund (PSF) Chair Tom Maynard (R-Florence) updated the board on the impact of market volatility due to COVID-19. The fund went from $35.9 billion at the beginning of the year to $31 billion in March. Maynard said 29% of the fund is in a defensive allocation and the portion of the PSF managed by the SBOE is not reliant on energy to the same degree as funds controlled by the School Land Board (SLB). Both of these factors insulated the PSF from some of the shock of the combined market and oil crashes recently. Maynard noted that reporting for real estate and private equity is delayed, so the picture will continue to take shape as more recent data becomes available.

Members ended the meeting by praising educators across the state who continue to work hard to educate Texas students while at home caring for their own families. Member Sue Melton-Malone said she was "blown away" by the job teachers have been doing. Member Georgina Perez (D-El Paso) noted that many districts, including her own, lack access to the internet. Perez noted the limitations of virtual learning and asked members to remember the needs of homeless and incarcerated students.

The board is expected to convene again in May to take up items that were originally on this week's agenda but were postponed. No dates for that meeting have been set, but Chairman Ellis said a timeline could be hammered out by next week. ATPE will keep you updated here on Teach the Vote as soon as that information is announced.

This is an Excellent & interesting post. It’s such a beneficial for visitors. Contact us on WHATSAPP for quick response. You can also start a LIVE CHAT session to place an order without any hassle. We recommend you to contact us even after placing the order using our forms. You can Contact us at: LiveChat:https://tawk.to/chat/5b056f7bd0f6723da57ecd06/default/?$_tawk_popout=true Call / Message on WhatsApp : +1 914 274 8666 Contact: (+1) 914 202 3836 Email: quickdocsfix@gmail.com Website: http://bankstatementediting.com

Usually I never comment on blogs but your article is so convincing that I never stop myself to say something about it. You’re doing a great job Man,Keep it up. If you guys require professional services regarding novelty documents like Novelty Bank Statements, Novelty Credit Card Statements, Novelty Utility Bills & all types of other Novelty Documents. Please fill out requirement gathering form on “Place Order” Page. You can contact us on WhatsApp number : +1 914 274 8666 Please contact us at: Live Chat: https://tawk.to/chat/5b056f7bd0f6723da57ecd06/default/?$_tawk_popout=true Call / Message on WhatsApp : +1 914 274 8666 Contact: (+1) 914 202 3836 Email: quickdocsfix@gmail.com Website : http://replacedocumentsonline.com/