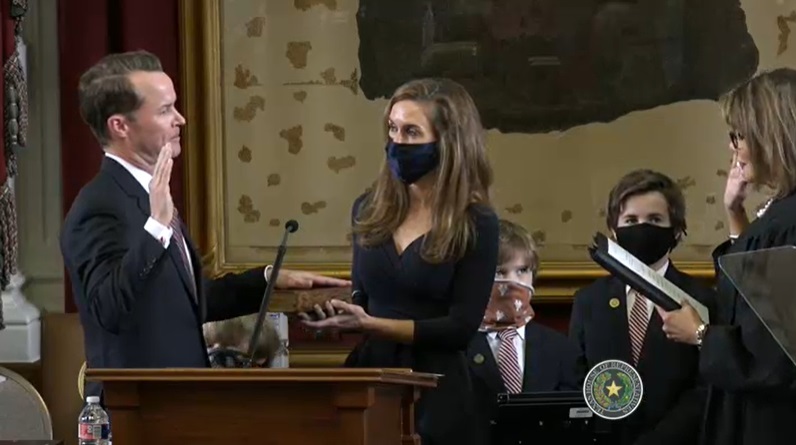 Today marked the first day of the 87th Texas Legislative Session. The state House and Senate each gaveled in for their opening day ceremonies, which were much shorter and more subdued than during non-pandemic times. The first order of business in each chamber, following the invocation and pledge, was formally swearing in the new senators and representatives. 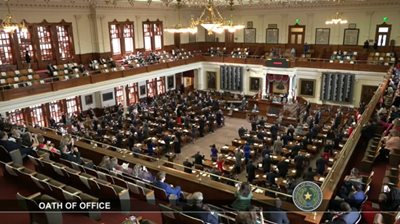 Following the swearing-in ceremony and roll call, the House formally nominated and then elected state Rep. Dade Phelan (R-Beaumont) as Speaker by a vote of 143-2. The two no votes came from freshmen Reps. Brian Slaton (R-Royse City) and Jeff Cason (R-Bedford). Two representatives were reportedly absent due to illness, another two representatives declined to attend the in-person ceremony due to concerns about the coronavirus risk, and one seat was empty due to the pending special election in House District 68.

Phelan’s acceptance speech to the Texas House emphasized the pressing needs of the state, including that of public education. “Texas children and educators must continue to be at the forefront of our agenda this session,” Phelan told the assembled House members and their limited guests. Prior to becoming a state representative in 2014, Phelan worked as a legislative staffer for both Democratic and Republican lawmakers at the state and federal level. “Always be good to staff,” Phelan quipped in today’s speech, adding, “You never know where they might end up.”

Earlier this week, Phelan spoke with the Texas Tribune and said everything is on the table as the Legislature grapples with pandemic-related budget cuts, while projecting that public education is still expected to be the largest part of the state budget. In his interview, Phelan added that the state “cannot abandon our children when they need us the most.” Fortunately, as we reported here on Teach the Vote yesterday, Texas Comptroller Glenn Hegar’s projection about the deficit state budget-writers are facing this session is not as bleak as was feared a few months ago.

In the Senate, following the administration of oaths and roll call, members of the upper chamber elected Sen. Brian Birdwell (R-Granbury) as President Pro-Tempore. The president pro-tem acts as the Senate’s presiding officer when the lieutenant governor is absent. The President Pro-Temp also becomes third in the line of succession for Texas governor, behind Lt. Gov. Dan Patrick (R).

Governor Greg Abbott (R) separately addressed both chambers in person today, as well. Abbott’s remarks were short and focused on encouraging the House and Senate to work together. “Now more than ever, America needs Texas to be successful,” Abbott told the lawmakers.

The House will resume business at 10 a.m. Wednesday to decide on housekeeping rules, followed by another meeting Thursday to vote on House rules. The rules determine how each chamber will function, including the procedures for debating and voting on bills. The Senate will reconvene Wednesday at 1:30 p.m. and must also adopt its rules for the session. Both the House and Senate plan to adjourn after adopting their rules until Tuesday, January 26.