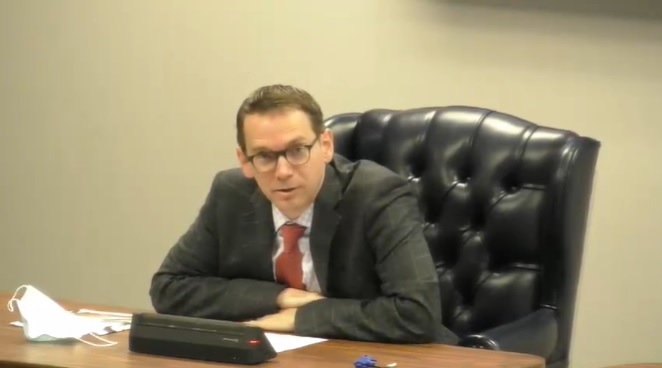 Texas Education Commissioner Mike Morath told the State Board of Education (SBOE) on Wednesday morning that he will not waive the spring STAAR administration, even if Texas were to receive a waiver of testing requirements from the U.S. Department of Education.

Commissioner Morath made the comments during a presentation to SBOE members at their January 27 meeting in Austin. Member Ruben Cortez (D-Brownsville) posed the question, asking the commissioner whether he would cancel the STAAR if Texas were to receive a federal waiver. Morath answered flatly, “No.”

Morath began his presentation discussing the annual report on public schools produced by the Texas Education Agency (TEA). The commissioner said the top questions fielded by TEA staff this year relate to protecting school funding under House Bill 3 passed by the Legislature in 2019, the A-F accountability system, and the long-term picture for remote instruction “in terms of what’s allowed and how it’s funded.”

The agency remains committed to the “60x30” plan, based on the goal that 60% of Texans aged 25-34 have a certificate or degree by the year 2030. In order to reach this goal, the commissioner emphasized the importance of recruiting and retaining high-quality educators.

"The teacher in the classroom is the single most important in-school factor that affects student outcomes,” said Morath.

Transitioning to discussion of the ongoing COVID-19 pandemic, the commissioner said data analysis conducted on optional beginning-of-year assessments completed by roughly 750,000 students suggested Texas students have suffered 3.2 months of learning loss as a result of spring school closures necessitated by the pandemic.

Board members had the opportunity to question Commissioner Morath about a variety of topics. Board Chairman Keven Ellis (R-Lufkin) and Member Matt Robinson (R-Friendswood) pressed the commissioner over whether and when districts would be informed about an extension of a “hold harmless” provision for school funding through the end of the current school year.

TEA offered an initial hold harmless covering the fall 2020 semester to guarantee districts would receive the same amount of state funding they received the previous year, even if they faced declining student enrollment as a result of the pandemic. That hold harmless expired at the end of 2020, and districts now face the challenge of making spending plans without knowing how much funding they can expect to receive for the current semester.

Morath punted the question to the Legislature, although he said he hoped districts would get an answer in February. Pointing to a number of potential revenue sources, including $5.5 billion in federal relief for Texas K-12 schools promised under the Coronavirus Response and Relief Supplemental Appropriations Act (CRRSAA), Morath added, "I'm feeling very positive about the financial picture for public education."

Member Tom Maynard (R-Florence) asked Morath whether there is any movement to get educators moved up in line for vaccines in order to facilitate resuming in-person instruction. ATPE has urged the state to include educators among the priority populations for vaccine access. The commissioner deferred Maynard’s question by saying those prioritization decisions are left up to the state’s Expert Vaccine Allocation Panel (EVAP). School employees as a profession are not included in the Phase 1B group that currently has access to the vaccine.

The commissioner sidestepped several questions from Member Cortez regarding federal funding, including how the state intends to spend federal CRRSAA funds and how much CARES Act funding remains unspent. The commissioner suggested those funds will be spent as directed by appropriators in the Texas Legislature.

On student testing, Commissioner Morath again said legislators will determine whether to allow a waiver for end-of-course (EOC) examinations. In lieu thereof, students may utilize the Individual Graduation Committees (IGC) option that was established to facilitate an avenue for graduation for those who have failed one or more state-required exams.

Finally, the commissioner demurred when asked by Member Pam Little (R-Fairview) whether he has an opinion on the recent talk of transitioning Texas from attendance-based funding to enrollment-based funding. Morath answered there are pros and cons to each method.

Following the commissioner’s remarks, the board turned its attention to Wednesday’s agenda, which includes a discussion of graduation requirements and curriculum standards (TEKS) for high school science and social studies. Board committees will meet Thursday, and the board will conclude its January meeting on Friday, January 29.

Deborah Morris, Teachers are not the highest risk person on campus. Registered school nurses are. But teachers are still at risk.

Only a moron would impose testing under these conditions

Teachers who are teaching in-person, are not only Frontline workers, but at the highest and most unprotected risk. There are zero PPE supplies other than a mask and hand sanitizer inside the classroom- a closed room for 6hrs of instruction with children who may or may not wear their masks properly at all times. Children do not always communicate when they''re just starting to feel ill. By the time a person is admitted to a hospital, they already have tested positive for Covid. This is not the case for schools. Children come down with their first symptoms while contagious at...SCHOOL. Teachers should be in the priority groups to receive vaccines ASAP. This is unacceptable.

Typical beaurocrate! Zero knowledge of what educators do on a daily basis & most importantly zero knowledge about working with kids. Our profession deals with humans not assembling & packaging items! I am sure he has a hard time completing his tasks when he''s hungry, tired, upset or frustrated. It''s time to demand from our governor to appoint an experienced & knowledgeable public school educational leader as commissioner of education. I am sure they wouldn''t appoint an educator as energy commissioner because that''s something that''s valued. It''s obvious how much our current state leadership values their future caretakers & the educators who prepare them when they place people like Mr. Morath in charge of the state''s most valuable asset - our kids.

Way to side step every hard question. He was asked if there was any movement to move us up for the vaccine. TEA should be ADVOCATING for us to get it. Other states didn’t mess with the CDC’s recommendation.

Post his HOME address (since we know he’s not in the office while teachers are forced back to classrooms) and let’s put people outside making noise 24-7 until he comes to his senses. Let’s gooooo protest time!!!

Are you serious—kids do not even get online to do homework —seriously—he is out of touch—good luck!!

Marathon needs to visit schools and talk to teachers

Staar needs to be cancelled this year. We have parents, teachers, and students dying! Our kids do not need the stress of this test on top of everything else this year! Let the teachers teach! Let them work on social/emotional skills to cope with all that is happening this year.