March 2022 primary elections could be delayed by redistricting

How long it takes to redraw Texas voting maps this fall will determine whether the March 2022 primary elections proceed as scheduled or must be postponed.

Gov. Greg Abbott announced Tuesday, September 7, 2021, that the Legislature must return to Austin on Monday, September 20, for a third 30-day special session that will focus on a handful of miscellaneous items. Among the five topics on the governor’s call, redistricting is the only item the Legislature is constitutionally obligated to pass.

Every 10 years, Texas is required by law to redraw voting maps based upon updated population data provided by the U.S. Census. This includes voting districts for the Texas House of Representatives, Texas Senate, U.S. Congress, and State Board of Education (SBOE). These maps are approved in the form of a bill.

In Texas, the Legislature is in charge of redistricting. This allows state lawmakers in the political majority a good deal of latitude to pick their own voters. Though legislators are prohibited from drawing districts that deliberately dilute the voting influence of racial minorities, the U.S. Supreme Court has ruled that they are free to draw districts that advantage one party over the other – a process known as “gerrymandering.”

Data from the 2020 U.S. Census was delivered to the states in August and showed Texas gaining two additional congressional seats as a result of explosive population growth – 95 percent of which was driven by people of color. Hispanic Texans now make up 39.3% of the state’s population, compared to 39.8% of non-Hispanic white Texans. Texas also added more than 600,000 new Asian residents since 2010. The population growth was largely concentrated in cities and suburbs.

The receipt of this data means Texas must begin the process of redrawing the voting maps that will be used in the 2022 election cycle, which formally begins with the party primary elections typically held in March. One of the bills the Legislature passed during the second special session formally links the timing of the redistricting process to that of the upcoming primaries. Senate Bill (SB) 13 by Sen. Joan Huffman (R-Houston) lays out the formula for determining election dates.

If the maps for Texas House, Texas Senate, U.S. Congress, and SBOE districts are passed as different bills, the deadline for the governor’s signature will be based on the last bill he signs. The deadline will also affect the candidate filing deadlines and the dates for any primary runoff elections, which would be held May 24, June 21, or July 26 under the criteria laid out by SB 13.

The timing of elections can potentially have an impact on the results. Fewer voters tend to vote in runoff elections, especially when those elections are held during the summer months or outside of the normal election calendar. The lower the turnout in a primary election, the more likely the election is to be decided by the most fervent partisans on either side.

One example often cited is the 2012 Republican primary, which was postponed to May as a result of delays in the redistricting process following the 2010 Census. Even though 2012 was a presidential election year, turnout in the Republican primary was 10.8 percent, down from 11.4 percent in the previous election cycle held on the normal schedule. In that election, then Lt. Gov. David Dewhurst led a field of nine candidates for an open seat in the U.S. Senate when the votes were tabulated in May, but he was shy of the number needed for an outright win. The race went to a July runoff in which just 8.5 percent of voters participated. The victor who emerged was a relatively unknown state employee at the time named Ted Cruz.

It’s worth noting that litigation over the Texas voting maps was the driving factor behind the postponement of the 2012 primaries. When the last round of redistricting began, Texas was required to submit any changes to its voting laws to the U.S. Department of Justice for review. This requirement, known as preclearance, stemmed from the 1965 Voting Rights Acts signed by President Lyndon B. Johnson, a Democrat from Texas, and the federal law applied to states that had demonstrated a history of intentional racial discrimination at the polls. Federal judges ruled that Texas continued to intentionally discriminate against minority voters when legislators redrew voting maps in 2011. A panel of three judges took over the process and issued a revised version of the maps for use in the 2012 elections. The case was appealed to the U.S. Supreme Court, which sided with Texas legislators in a 5-4 decision led by conservative Chief Justice John Roberts. The 2013 opinion in Shelby County v. Holder struck down the preclearance provision of the Voting Rights Act, which freed Texas and other states with discriminatory histories from automatic federal oversight of their election laws.

The echoes of that litigation continue to be felt heading into the current round of redistricting. The federal judges who revised the 2011 maps warned that their changes did not cure the maps of all discriminatory effects, but the U.S. Supreme Court nonetheless ruled that future maps based on the 2011 revisions would not be tainted by any lingering discrimination. In 2019, federal judges overruled a lawsuit that sought to place Texas back under preclearance before the redistricting process began anew. 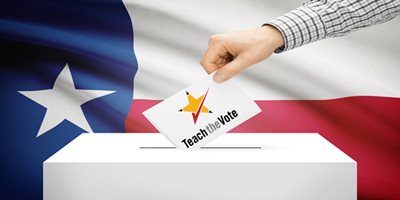 It is almost certain that whatever maps legislators draw for themselves in the upcoming special session will be challenged in court, and it is unclear what effect that may have on the upcoming primary elections. There is, however, one thing that is very clear: Elections belong to those who show up.

No matter when the elections are held, they will be decided by the voters who take the time to show up at the polls and cast their ballots. It is crucial that educators turn out in force and research how each candidate, if elected, would affect your profession. Fortunately, that information is available for Texas House, Texas Senate, SBOE, and even some statewide races right here at TeachtheVote.org.

The stark difference in the respect shown for educators between the 2019 and 2021 legislative sessions proved that educators cannot afford to take a single election for granted. Stay tuned to Teach the Vote for the latest developments concerning the upcoming election cycle.
Previous
Next