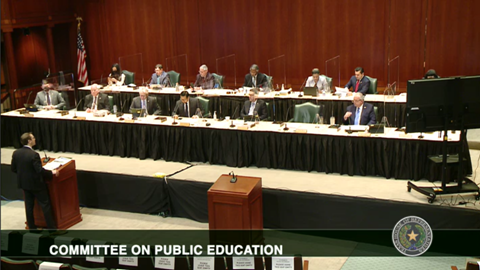 Commissioner Morath’s presentation included much of the same information he has shared recently with the House and Senate budget committees, including updates on COVID-19 outcomes and the implementation of last session’s school finance bill, House Bill (HB) 3, and standardized testing bill, HB 3906. Here are highlights of Morath’s presentation:

As for last session’s HB 3, the commissioner praised the outcomes of the bill, even if stunted by COVID-19. Morath said there was an overall average pay increase of $5,215 for teachers with 5+ years and almost $3,839 for novice teachers. There was an increase of over 31,000 students in pre-K through grade 4, though that number has now reversed due to the pandemic. Morath also mentioned an unintended consequence of HB 3 related to career and technical education funding and its interaction with the small and midsize district funding.

Morath’s discussion of HB 3906 was much shorter. He discussed areas of the bill that lawmakers would need to act on to continue making progress, such as the transition to online testing.

Questions from committee members touched on a variety of areas, including student testing, funding, special education, and pre-K. Here are some highlights of this portion of the hearing: Chairman Dutton did not announce a date for the next meeting of the House Public Education Committee. Stay tuned to Teach the Vote for updates.
Previous
Next