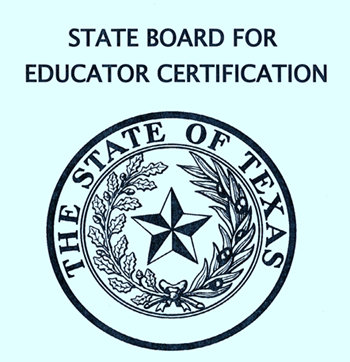 Highlights of the February 2021 SBEC meeting

The State Board for Educator Certification (SBEC) held its first meeting of the year today, February 12, and took up an agenda including extension of the EdTPA performance assessment pilot, rule reviews, and approving new members (including ATPE) appointed to the Educator Preparation Advisory Committee. 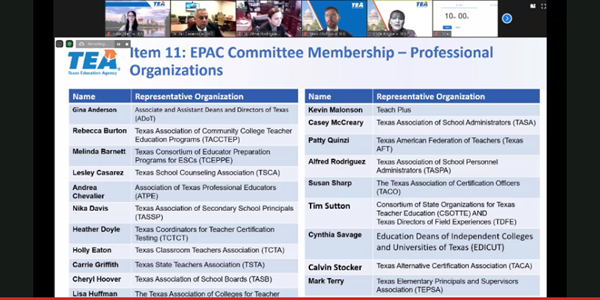 ATPE Added to EPAC: SBEC approved the new composition and membership of the EPAC, a standing advisory committee to SBEC, to include greater representation from educators. Before the change, EPAC was primarily composed of educator preparation program (EPP) representatives. The committee will now have representatives from professional organizations, including ATPE, five at-large members from EPPs, and five at-large members who are not associated with an EPP, including three teachers, for a total of 31 members. ATPE Lobbyist and former teacher Andrea Chevalier will represent ATPE on the EPAC. While the board moved forward with the proposed membership, SBEC Chair Dr. Art Cavazos, superintendent of Harlingen-CISD, encouraged TEA staff to take a deep dive in future discussions to ensure the committee’s membership reflects equity considerations and the diversity of Texas.

Today, SBEC approved the 2019-20 commendations in all four categories. Find the commendations for categories 1-3 here. The top performers in category four were Urban Teachers, University of Houston, and Texas Tech University, all of which have strong residency models for teacher candidates.

*Shortage areas: Bilingual/English as a Second Language and Special Education at all levels and Career and Technical Education, Technology Applications and Computer Science, and Mathematics at secondary levels.

In one case heard today, the board discussed how they should interpret a “significant change in the educator’s family needs,” and whether the change can happen before or after an educator signs their certificate to be considered good cause. In this case, Chair Cavazos broke a tie among the members to vote in favor of a one-year suspension of the educator’s certificate, upholding the board’s current interpretation that “a significant change” must be something that happens after a contract is signed. In effect, the significant change is interpreted as a “surprise” event, something the educator does not know about when they sign their contract, if the board is to consider it good cause for abandoning a contract.

In three other cases, the board considered how the mitigating factor of showing “good faith communications and negotiations” by the educator with their employing school district applies to the length of a suspension. Because the administrative law judge (ALJ) used this mitigating factor to reduce contract abandonment sanctions to a different degree in each of the three cases presented today, SBEC faced the question of how much weight “good faith communications” should hold and whether it could hold a different weight in different cases. Typically, TEA reduces a suspension by one month for each mitigating factor that applies, and therefore the agency staff recommended that all three cases be set to an 11-month suspension. In all three cases, however, the board considered each educator’s situation and abandonment separately, rejecting TEA’s recommendation to issue 11-month suspensions across the board and accepting the ALJ’s recommendations of differing suspension lengths. The decision sets the precedent that one mitigating factor can hold a different weight for different educators based on their situation.

“Discussion only” agenda items:
Previous
Next

Great article with a lot of useful tips. <a href="http://caresortsolutions.com/web-design">professional web design services</a>