Help spread the word about the 2020 Census

The 2020 Census is well underway, but at a smidge over 56%, Texas still has a long way to go in its response rate. Using the resources compiled by Texas Counts, here's what educators and community stakeholders should consider as they help to get out the count in their communities.

Messaging: Find sample messaging here and remember to keep it simple and emphasize that completing the census is safe, easy, and important. Unfortunately, the potential inclusion of a citizenship question on the census has garnered fear among many who live in Texas. Some are also afraid that the information on the number of people who live in their household will be shared with their landlords or that their location will be shared with police or law enforcement. It important for those living in Texas to know that it is illegal for the U.S. Census Bureau to release information from the census and that the information shared, especially regarding children, will help to provide an adequate amount of resources for public schooling, meals, child care, and other essential public resources. Find a repository of videos, postcards, flyers, and posters from Texas Counts here.

Responding to the census is easier than ever with the new online response system, and you don't have to have received an invitation to submit your response. As we previously reported, the U.S. Census Bureau has a great webpage explaining ways to respond to the census and updates on situations caused by the coronavirus, such as college students who are now at home. (Please count college students in the town in which they attend college!) Those who have not self-responded to the census can also use phone or mail methods to respond and must do so by October 31, 2020.

Recognizing Hard-to-Count Communities: It is estimated that 25% of Texans and 30% of Texas children live in areas that are considered hard-to-count due to difficulties in contacting, locating, surveying, and/or engaging. In some cases, factors like language barriers, lack of stable housing, or distrust of the government can contribute to the presence of hard-to-count communities. School systems are particularly suited to easing these factors because educators and school leaders are trusted community members, who can reach families through regular communications and contact (such as meal pickups), and are readily able to translate census outreach materials in the same ways they translate other school communications.

The image below gives you some idea of the vast area of Texas that is hard-to-count by showing the portions of Texas (in yellow) that are just beginning to receive hand-delivered packets from census workers. These areas do not have stable access to the internet or are in areas that require in-person delivery of census materials. Since these areas are perhaps just hearing about the census for the first time, so be sure to reach out to families and reinforce the safety and ease of completing the census. Census workers will undertake the huge task of non-response follow up (NRFU) starting August 11 through October 31, at which point they will go to all households that have not responded yet to the census. Since school will be starting again around this time, communications about the census to families are vital and should be disbursed regularly. 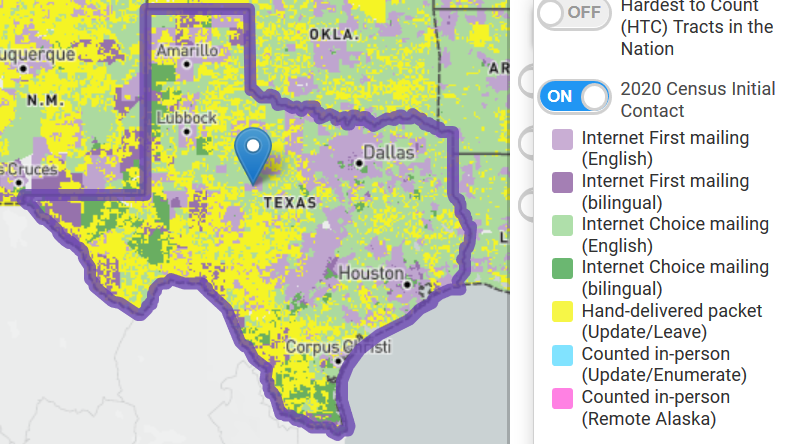 Know the Facts: As we previously reported here on Teach the Vote, Texas received $43 billion in total census-statistic derived funding in 2018. This included over $1.3 billion dollars in Title I funding, $1.4 billion in National School Lunch Program funds, $1.1 billion for the State Children's Health Insurance Program (S-CHIP), and billions more for foster care, early childhood education, child care, and other nutritional programs. A 1% under count could cost the state $300 million, which would heavily impact families, children, and the elderly. Knowing what is at stake will help messaging to those who rely on these services.

The tool below, developed by the City University of New York, is a great way to explore census data and see specifically which parts of your community need extra outreach.

See the full map at www.censushardtocountmaps2020.us

Happy census-ing and thank you to all educators and community stakeholders who are engaging in get-out-the-count efforts. Our public schools depend on it!