From The Texas Tribune: Texas schools are wary of losing funding gains lawmakers provided in 2019

A school finance bill in 2019 boosted funding for districts, but the pandemic has since added layers of financial uncertainty.

By Aliyya Swaby and Cassandra Pollock, The Texas Tribune Jan. 15, 2021 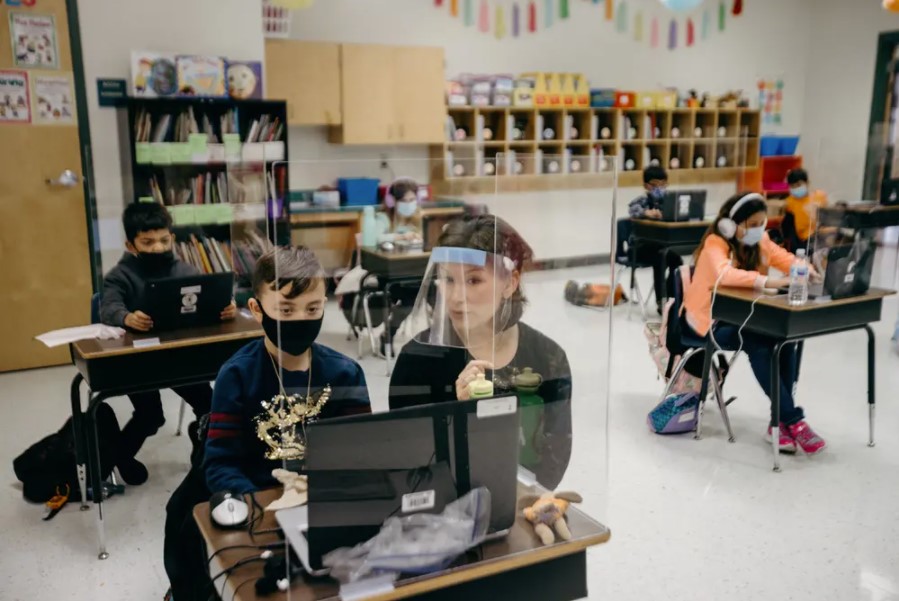 The 2019 Texas legislative session ended on a high for public education, with more money spent on schools than had been in more than a decade.

But going into the 2021 session, the tables have turned for school officials.

All that has raised the stakes for school leaders this legislative session as they hope their gains from two years ago don’t prove short-lived.

As lawmakers gaveled in to begin the session this week, Texas leaders promised to preserve the billions of dollars in new programs and tax cuts they passed nearly unanimously two years ago. That promise was buoyed by the state comptroller’s announcement that the budget estimate looks somewhat better than previously projected.

But despite this week’s good news, state leaders have so far not addressed a few major school funding questions, which could help determine whether this legislative session will be a good one for public education advocates.

Most immediately, they haven’t told school superintendents whether they will cut their funding, which is tied to enrollment, this school year. Thanks to the pandemic, student enrollment is down more than 150,000 compared to a year ago.

State officials haven’t announced what they plan to do with the $5.5 billion in additional federal stimulus dollars Texas was awarded for public education.

And they haven’t rolled out a comprehensive plan for how they will help schools pay to remediate the thousands of students who have struggled with academics, special education and mental health throughout the pandemic and will need more resources in coming years.

“We know that there’s been a huge amount of learning loss during all of this and the only way to eliminate educational gaps is by increasing services to children,” said Kevin Brown, executive director of the Texas Association of School Administrators. “That can take the place of smaller class sizes, pulling children out into smaller groups, and that takes staff time. You have to have another teacher to do that.”

In a call with school superintendents Thursday afternoon, Texas Education Commissioner Mike Morath had few answers to clear up these funding questions: “No decisions have been made and nothing is final.”

The agency released a report earlier this month showing that 156,596 fewer students were enrolled in October 2020 compared to 2019. Most of those students were in early education, pre-K and kindergarten, grades where education is optional under state law.

The lower enrollment means school districts will lose money unless the state takes action. State officials chose not to cut funding for the first half of the academic year, but have not released information on the second.

Morath said he would not make a decision before looking at enrollment data in February. Districts have worked hard to re-enroll students who were previously missing, and about a third have not had significant enrollment declines, he said.

Federal funding could help shore up schools, but Texas hasn’t announced exactly how it will spend the $5.5 billion. Last spring, Texas received $1.3 billion in federal stimulus money for public education. Instead of giving the money to school districts on top of their expected funding for the year, state education officials used the money to stabilize the state’s budget.

“I’m empathetic to the state needing to stabilize their own budget. And I think in this new round of stimulus funding, though, we’re hopefully in a little different position than that and can use that funding to make sure that we are fully funding our schools for the next biennium as well as providing funding to continue to advance education,” Brown said.

San Antonio’s Northside Independent School District, with about 100,000 students, shut down classrooms in March and moved to remote learning. Many of its students have been learning from home ever since. Currently, 26% of secondary school students and 17% of elementary school students are failing one or more classes, according to Superintendent Brian Woods.

Woods said he is going to pay staff to spend extra time working with students on academics after school and on the weekends. Unless the state allocates extra money through the stimulus package, he will use district savings.

It’s unclear whether education will go back to normal next fall, without a pediatric vaccine yet available and with families still feeling nervous about COVID-19, Woods said. “Normally most schools would feel really confident in their enrollment projections. … Obviously the pandemic has shaken the confidence in that and for good reason. That leads to a lot of uncertainty, not so much in current year but as folks are starting to build a budget for 21-22.”

That same sense of uncertainty applies to the state budget in this legislative session and beyond.

Schools are funded through local property taxes and state funds. In past years, as property values grew in many Texas regions, the state was paying a smaller share of the cost of public education. So lawmakers included a provision in the 2019 school finance law that would automatically lower tax rates in school districts with fast-growing property values. That change was projected to cost Texas $1 billion more each year.

Experts say the pandemic slowed down the economy enough to where property values are not growing as fast as predicted, meaning the state may not have to spend as much to lower taxes this session. But once the economy bounces back, lawmakers will need a plan.

“What I hope we have a conversation about is the long-term sustainability,” said Bob Popinski, policy director at Raise Your Hand Texas. “We can get through the next legislative session without cutting public education, but is there a plan for the sustainability of all the things they passed [in 2019]?”

When lawmakers gaveled out in May 2019, they had no idea how they were going to find the money. On the last day of the 2019 session, Dennis Bonnen, the Republican House speaker at the time, told reporters that lawmakers would need to spend the time “figuring out how we want to find revenues to ensure the property tax relief we’ve created continues and can even be done in a greater fashion” before the next session.

Plans to do so, though, were put on pause when the pandemic hit and House committees were unable to meet, making it less clear how lawmakers could work and get input on such issues before convening again in January. The state budget board released a report in September studying the benefits and drawbacks of certain taxes and revenue streams, but lawmakers have not thoroughly discussed it publicly.

“We thought we’d be following through, making sure the things in House Bill 3 were being implemented with effectiveness,” said state Sen. Larry Taylor, a Friendswood Republican who chairs the Senate Education Committee, during a virtual event in December. “That certainly is happening, but the timeline has been delayed on a number of the measures within House Bill 3.”

Another challenge facing lawmakers is the projected shortfall to the state budget, which as of Monday is not expected to be as dire as Texas Comptroller Glenn Hegar had initially projected over the summer. Still, Hegar projected in his biennial estimate that lawmakers are facing a nearly $1 billion deficit for the current budget — and lawmakers have since acknowledged that grappling with that and writing the next two-year budget will be a challenge.

Despite that tough economic reality, leaders such as new House Speaker Dade Phelan, R-Beaumont, have said in recent weeks that students and educators must continue to be prioritized this legislative session, particularly during a pandemic that has upended the state’s public education system.

“When the House last adjourned, we celebrated landmark property tax and school finance reform,” Phelan said Tuesday before the House after winning election for speaker. “But now, Texas children are at risk of falling behind because of disruptions caused across the state as a result of this pandemic. We cannot fail them when they need us most.”

"This revenue estimate highlights the resiliency of our Texas economy," Nelson said. "Tough decisions remain, but I am confident we can pass a budget that meets our essential needs, maintains our commitment to education and follows the principles of fiscal responsibility that put us in a stronger position than other states to withstand this unprecedented pandemic.”

When The Texas Tribune asked how the state would pay for school district tax cuts in future years, Hegar acknowledged that was an open question. “The biggest question is always the trajectory of the state economy,” he said.

Already, some experts are pessimistic. Eva DeLuna Castro, state budget analyst for the progressive think tank Every Texan, thinks the state could likely be climbing out of the economic recession for years.

"It's very likely, though, with so much uncertainty, that in 2023 we may come back and things still aren't recovered fully," she said. "The past two recessions, it's been like 40 months before Texas got back to where it was before the recession came along, and that is a long time to not have revenues keeping up with existing demands and then new things created by these dire economic circumstances we’re in the middle of."

Mitchell Ferman contributed to this report.