Texas Comptroller Glenn Hegar didn't provide details as he told lawmakers Monday that the financial forecast isn't as dire as earlier feared. But he said revenues are still down "significantly" compared with last year. 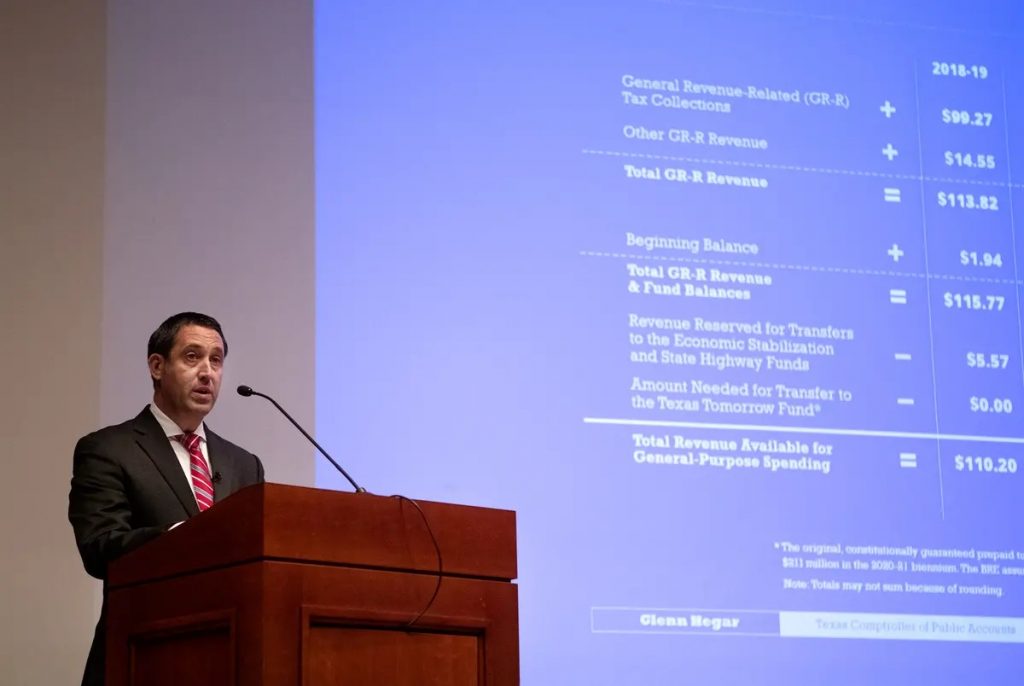 Comptroller Glenn Hegar discussed the biennial revenue estimate for the 2020-21 biennium at the state capitol in 2019. On Monday, he said state revenues are down during the pandemic, but not as bad as earlier feared. Credit: Miguel Gutierrez Jr./The Texas Tribune

Despite “historic declines,” state lawmakers will have more money to work with in the upcoming legislative session than Comptroller Glenn Hegar expected over the summer, he said Monday. But Hegar did not outline specifics as state coffers continue to suffer from the economic recession spurred by the coronavirus pandemic.

Sales tax revenues, by far the largest part of the state budget, fell by 4.8% in the second half of the 2020 fiscal year compared with the same stretch last year, Hegar said. It was a much softer hit than he anticipated, thanks to Texans staying home and spending money on “staycations instead of vacations.”

Other revenue streams, such as taxes related to alcohol, hotel occupancy, and oil and gas, were down more than 40% in the same period this year compared with last, Hegar told lawmakers Monday during a Legislative Budget Board meeting at the Capitol.

“Revenues remain down significantly relative to a year ago, and well below what we expected to collect when the Legislature wrapped up work on the budget in 2019,” Hegar said.

Legislative budget writers decide how much money will be allocated for large state expenses like how much school districts get, how well health care programs are funded, which transportation projects get built and what amount state law enforcement gets based on how much the comptroller says will be available during the next two-year budget cycle, which runs from September 2021 through August 2023. Hegar will likely unveil that number as the session nears.

Hegar, whose office is in charge of collecting taxes owed to the state of Texas, last formally updated lawmakers in July, when he wrote a letter to Gov. Greg Abbott and lawmakers projecting the state’s current two-year budget to be roughly $11.5 billion less than originally estimated. That would put the state on track to end the biennium, which runs through August 2021, with a deficit of nearly $4.6 billion, Hegar wrote in July.

On Monday, Hegar presented virtually to some of the state’s political leaders, including Lt. Gov. Dan Patrick and House Speaker Dennis Bonnen, who co-chair the budget board and who appeared in person at the Capitol along with eight other colleagues from both chambers.

Plexiglass dividers separated the lawmakers, most of whom entered the room wearing masks and who were all tested for the coronavirus before attending the meeting, a possible preview of what the Legislature could look like once it begins Jan. 12.

As of Monday, though, Capitol leaders have not said what the upcoming session will look like in the time of the coronavirus. Still, despite physical and technological challenges, lawmakers will have to navigate a tricky budget during a period when large numbers of Texans continue to struggle through a pandemic and an economic recession.

Before Monday’s meeting adjourned, it also turned into a brief public goodbye between Patrick and Bonnen, who is retiring from the House after a 2019 political scandal.

“Thank you for all of your cooperation working with the Senate and leading the House during the interim,” Patrick said. “A much different level of cooperation than in the past, so I greatly appreciate that and I look forward to the new speaker.”