From The Texas Tribune: Many Texas students will return to classrooms Tuesday. Little will be normal.

As students across Texas return to schools for in-person classes, there will be masks, distancing and lunches eaten at desks. Many students will remain at home, joining in on laptops and phones.

By Aliyya Swaby and Emma Platoff, The Texas Tribune Sept. 8, 2020 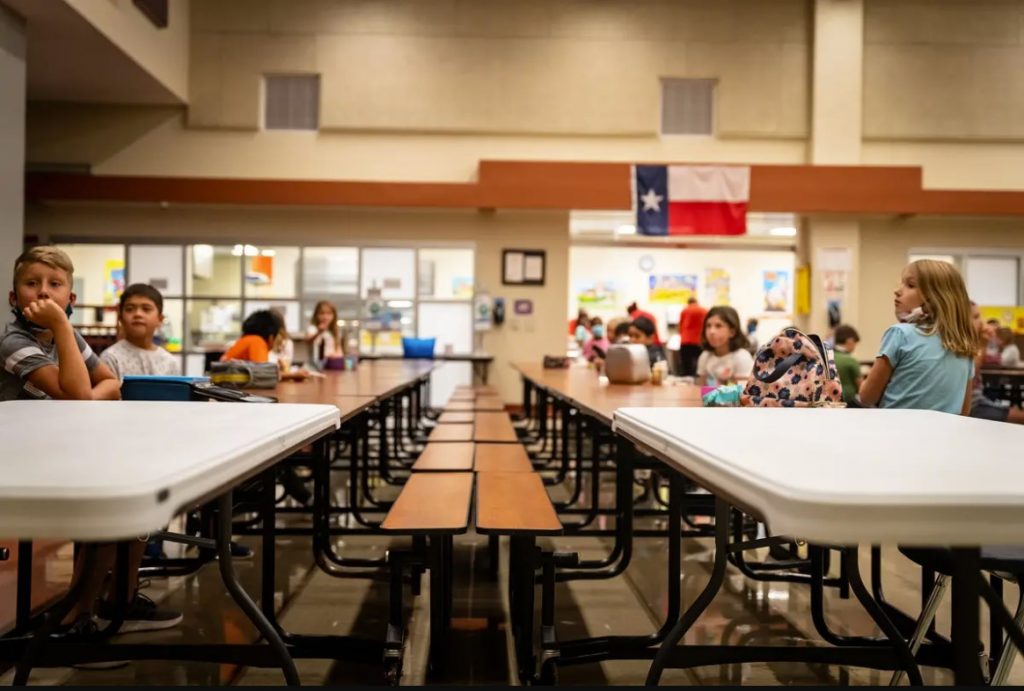 Students sit distanced from one another in the lunch room at Jacob’s Well Elementary School in Wimberley. Credit: Jordan Vonderhaar for The Texas Tribune

On a normal first day of school, Texas children would wake up early to cram into school buses, eager to huddle and chat with their friends in the hallways before streaming toward their classrooms.

On Tuesday, as many of the state’s biggest urban and suburban districts return for their first day of in-person instruction, there is anxiety mingled with that excitement. Many parents will not be allowed to walk their kindergarteners inside for their first day. Teenagers will be shooed away if they congregate around their lockers. Meals will be grab-and-go, often eaten in classrooms instead of raucous cafeterias. Students and teachers will wear masks, trying to stay as far apart from one another as possible even as they come together for the first time in months.

Many kids will not be entering their schools at all. Some of the state’s biggest districts, including Houston and Dallas independent school districts, will not open their classrooms for in-person learning until late September or October, and they may even ask the state for more time if the virus isn’t under control.

Only about half of Seguin ISD’s students are expected to head into classrooms Tuesday morning for the first day of in-person instruction. They will walk past thermal scanners, which can measure the body temperature of about 30 people at a time and detect fevers that may be signs of illness. Middle and high school students will sit in desks spread apart, in many cases less than 6 feet with dividers, and younger students will be separated by dividers at large round tables.

Most teachers will be simultaneously instructing 12 to 16 students in their classrooms and more at home tuning in from cellphones or laptops. Some teachers will sit in empty classrooms and broadcast lessons to 20 or 30 students. A small number who have health conditions or young children received waivers to teach virtually from their homes.

“Things are ever changing. The one thing I’ve appreciated that stayed constant was the interest in students returning has been at 50%,” Superintendent Matthew Gutierrez said of his 7,200-student district east of San Antonio. “I believe that we can safely social distance at that number in our buildings.”

Parent interest in in-person instruction varies greatly across the state. In some hard-hit parts of the state, like Mercedes ISD in South Texas, the vast majority of parents are opting for virtual learning. In Texarkana’s Bowie County, where coronavirus cases have stayed relatively low, most Maud ISD parents have already sent their kids to school in person.

Local health authorities continue to clash with school districts over whether it’s safe to open, concerned that Labor Day festivities could lead to higher case numbers, as Memorial Day did this spring. Fort Bend County health officials sent Katy ISD a letter in late July urging it not to open classrooms or start extracurricular activities “before late September in the vast majority of cases,” until the “effect of the Labor Day holiday can be determined.”

When schools were forced by the pandemic to hurriedly switch to virtual learning in the spring, most Texas districts didn’t require teachers to conduct live virtual lessons, but more are attempting that type of instruction this year. That means many teachers will have to simultaneously instruct two groups of students: those in front of them, and those watching from their iPads and laptops.

In Seguin ISD, most of the lessons will also be recorded for students who couldn’t find time to log in and watch live, important in a district with 71% low-income students, Gutierrez said. “You have parents that have multiple jobs. They’re shift workers. To expect that our students are going to go through their entire day at home alongside the face-to-face learners is really unreasonable when they don’t have that support, that structure or that supervision at home. They would be missing out on instruction.”

He acknowledged that those students will be missing out on the benefits of live instruction: having a teacher correct their pronunciation of a challenging word or being able to ask questions about a complex math problem in real time.

Austin ISD starts virtually Tuesday and plans to open classrooms in early October. Eight-year-old Isla Arb will start third grade at Graham Elementary School online Tuesday and will continue virtually to avoid endangering her grandmother, who has cancer, said her mother, Katie Arb. Both Katie Arb and her husband work full time, so they hired another mother to watch Isla and her 4-year-old sibling on weekdays. They’re paying her about $15 per hour, as well as paid sick leave and vacation, replacing some of the pay she had received as a dental hygienist before the pandemic.

“The bulk of her responsibilities are going to be to keep the 4-year-old away from our 8-year-old,” Katie Arb said.

Isla is excited about getting to wear a unicorn onesie to virtual school every day at the messy desk in her bedroom. But she got quiet when she thought about her classmates and teachers returning to campus in October. “I don’t want them to get coronavirus,” she said sadly.

Even students who return to Austin ISD’s campuses will effectively be learning virtually. When she goes back to school in early October, Austin ISD high school theater teacher Rachel Seney will sit in a classroom, with a mask on, leading a virtual class through musical numbers or dramatic exercises. Students spread 6 feet apart will sit in front of her on their laptops, each one completing assignments or watching a different teacher deliver instruction.

Students will spend nearly the entire day, including lunch, in one classroom, a plan intended to reduce the public health risks during a pandemic. If one child or staff member gets infected, it will be easy to trace exactly who they were in contact with — meaning there’s no need to shut down entire campuses or districts.

Seney, who teaches at predominantly white and high-income Anderson High School, said she sees the model as more equitable since all students end up learning virtually in some way. “You’re not teaching equitably if you have some students in front of you and some students online. Now that some schools have started going back and are using that model, I’m already seeing it’s not happening,” she said. “It’s not really effective.”

Her sister Blair Seney will be doing just that at Cypress Falls High School in Cypress-Fairbanks ISD, miles away in Harris County’s suburbs. A special education educator, she helps modify assignments or provide extra time on testing for students with disabilities alongside a primary classroom teacher.

“We’re expected to teach at the same time the kids that are in the classroom who don’t have access to technology and the students at home who are on the computer,” Blair Seney said. She has been a constant agitator for more safety requirements in schools and more flexibility for teachers terrified to return in person. In August, she stood in the back of a school board meeting with a sign that said, “Your attendance is required at my funeral,” while her mother, also a teacher at the school, spoke at the public hearing. That month, Cypress-Fairbanks ISD teachers unsuccessfully sued the district, asking not to be required to report to their campuses for training.

About 42% of students have decided to attend school in person, according to a district survey. Often, Blair Seney pulls students into her office, a tiny storage closet with no ventilation, for one-on-one assistance. “I’m not sure how that’s going to work,” she said. “It is definitely a thought that’s keeping me up at night, trying to figure out how we’re going to make all this work.”

Health precautions vary among districts and schools. Under Gov. Greg Abbott’s order, everyone over the age of 10 must wear a mask. But guidance from the Texas Education Agency leaves districts largely on their own to design protections against a virus that spreads undetected in as many as 40% of those who have it. In many districts, maintaining 6 feet of distance among students will simply not be possible.

“It’s very scattershot,” said Monty Exter, a lobbyist for the Association of Texas Professional Educators. “There’s a huge variation in the policies that are being put in place within districts to protect the health and safety of educators, from physical structures to logistics to access to [personal protective equipment]. Absolutely there have been districts that say, ‘Here’s your two gloves and your mask, that’s all you’re getting.’”

In Houston-area Humble ISD, where kids have been back in classrooms since late August, “it has been surprisingly normal,” said Timbers Elementary School fifth grade teacher Stacey Ward. “Question mark?”

The 10- and 11-year-olds who tramp in for Ward’s science and social studies classes have been surprisingly compliant about wearing their masks, though she sometimes has to remind them, with a single word — “mask!” or “nose” — to ensure the fabric covers their noses, too. Every other student sits behind a plexiglass barrier, spaced out as far apart as possible, but with 18 to 20 students per class, it has not been possible to keep 6 feet among them.

Instruction stops five minutes early so kids can wipe down their desks. Ward collects their books at the end of the day. There is no sharing of supplies.

And Ward has made one more adjustment. Typically, when students enter or exit her classroom, they get three options: high-five, hug or handshake.

This year, she’s pivoted: “Now, it’s an elbow, a knee or a foot,” she said in a phone interview after her fourth day of in-person school. Elbow bumps are the runaway favorite.

Afterward, the students know to take a squirt of hand sanitizer. “It’s normal to them now,” she said.

Disclosure: The Texas Association of Professional Educators has been a financial supporter of The Texas Tribune, a nonprofit, nonpartisan news organization that is funded in part by donations from members, foundations and corporate sponsors. Financial supporters play no role in the Tribune's journalism. Find a complete list of them here.

This article, "Many Texas students will return to classrooms Tuesday. Little will be normal." was first published by The Texas Tribune, a nonprofit, nonpartisan media organization that informs Texans — and engages with them — about public policy, politics, government and statewide issues.
Previous
Next