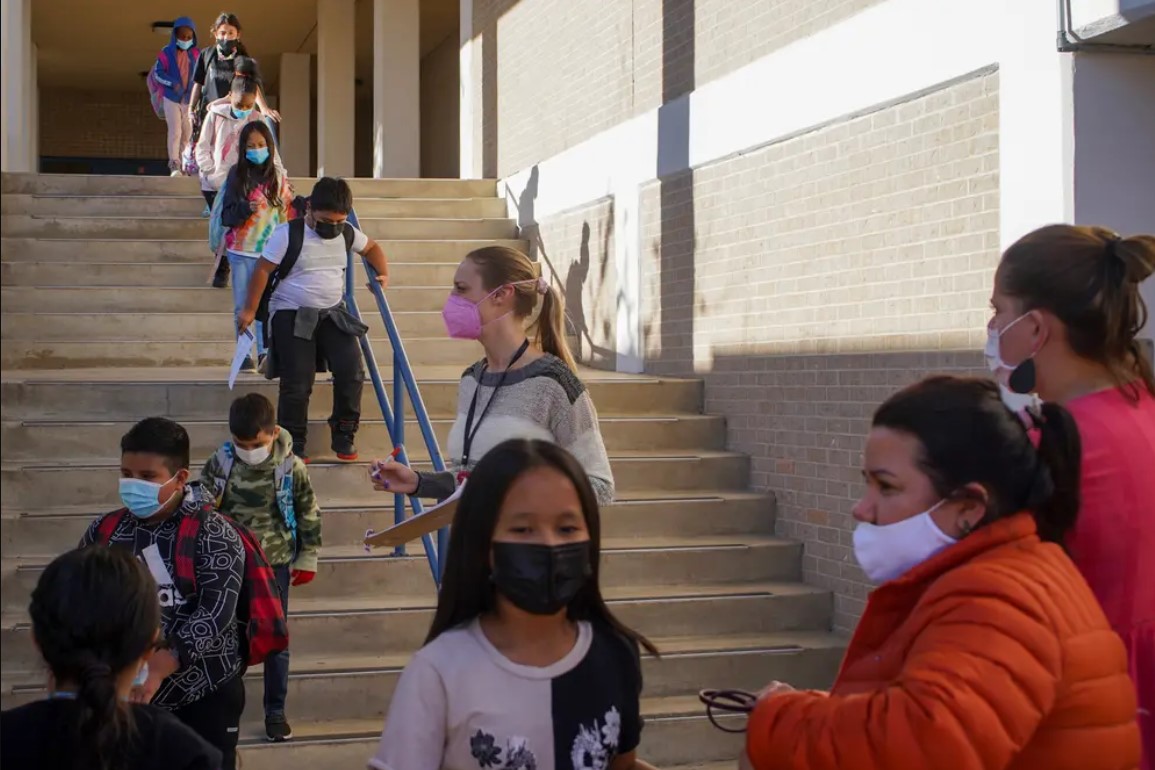 Teachers guide students outside of Linder Elementary School in Austin on the first day of classes after the winter break on Jan. 5, 2022. Credit: Miranda Lipton for The Texas Tribune

From The Texas Tribune: COVID-19 in Texas: Schools struggle to stay open as teachers and bus drivers call in sick

The complicated ritual of dropping off or picking up her three children from their respective schools already took Maze Ikeen about two hours per journey.

Now, after a wave of COVID-19 infections forced the Hutto Independent School District to discontinue regular bus operations for nearly 4,000 students this week, each trip has extended to about three hours — or almost six hours of Ikeen’s day — as parents have few other choices than to drive their children to campus.

Ikeen said she wishes the district had temporarily shut down instead.

“If they do this for the next week, I'm going to probably pull them from school and just say that I don't want them there because of COVID, because this is taking up entirely too much time of my day,” said Ikeen, who works virtually and has to catch up at night to accommodate the time spent waiting in school pickup lines. “I think that they need to at least do virtual for two weeks or something just to kind of slow it down somewhat because at the rate they're going, they're gonna lose all staff, and then they're gonna have no choice but to shut the schools down.”

Parents, students and school employees across Texas are facing similar disruptions as some school districts temporarily close or alter operations amid the latest COVID-19 surge. The virus is infecting teachers, bus drivers and other staff members at unprecedented rates that may continue to rise, further complicating school functions.

School closures are affecting all parts of the state. Fort Worth’s Northwest Independent School District is closing from Friday to Wednesday after seeing a nearly 900% increase in COVID-19 cases since the winter break. At least 25 East Texas school districts have shut down for several days. The Texas Education Agency said it’s gathering information on how many school districts have closed across the state but did not have the information available Thursday.

“Every superintendent wants to be able to have kids in the classroom and teachers in the classroom … but you get to a certain critical place where you don't have enough staff availablemand you have to shut the campus down,” said Kevin Brown, the executive director of the Texas Association of School Administrators. “We want to keep kids safe, and you have to have a certain number of adults in the building.”

Many schools that have avoided closures are still facing widespread employee shortages as the highly contagious omicron variant infects more people faster than previous iterations of the virus.

Hutto ISD announced Sunday that it was suspending most of its school bus services after about a dozen drivers fell ill. The sick leaves worsened a bus driver shortage that Hutto ISD has been dealing with for years, and the district realized it would be unable to cover 32 bus route positions with its remaining staff.

Hutto school administrators are expected to announce Friday when all bus services will resume. Henry Gideon, Hutto ISD’s assistant superintendent for operations, hopes to get those services operating again next week.

“There's a shot,” he said. “We're not going to guarantee it, but we want to do everything we can to open up on Tuesday, if at all possible.”

While some school districts are pushing through the surge, others are pivoting. South of Fort Worth, the Rio Vista Independent School District opened its doors for in-person instruction in the first week of January, but after voluntary testing events revealed many employees had COVID-19, the school district closed for the second week of classes and hopes to return after Martin Luther King Jr. Day. The district’s latest COVID-19 data showed more than a third of its employees were sick.

Tammy Witten, Rio Vista ISD’s acting superintendent, said the district is also having trouble acquiring enough COVID-19 test kits and had to ask for some from neighboring school districts.

Hutto ISD, which has not announced closures, is also struggling to acquire enough tests and estimates it will run out of them after classes return from the long holiday weekend.

Without more tests, staff members showing symptoms will have to quarantine until they can get tested, which may further exacerbate the staffing shortages, Gideon said. More than 130 employees ranging from teachers to cafeteria workers are currently out sick.

“We're scrambling to borrow, beg and do whatever we can to find some, but we're very close to running out of test kits,” Gideon said.

The Clarksville Independent School District, in Red River County, shuttered its doors until Jan. 20 due to a surge in COVID-19 cases. The district is already looking to extend the academic year to make up for lost instructional time.

At its middle and high school campus, about 15 teachers are out sick with COVID-19, two of which are the district’s only high school-level English teachers. For Clarksville ISD, just a handful of absent teachers can deliver a devastating blow to the school system.

“You think to yourself, do you shut down an entire system for two teachers? In a small district, if it's two of the right teachers, that's all it takes,” Clarksville ISD Superintendent Kermit Ward said. “For the next five days, my kids (wouldn’t) get any English at all. None, because there's no one else at that campus capable of delivering that level of instruction.”

And with funding tied to in-person attendance, the district can’t afford to provide virtual instruction in addition to having to extend the school year.

“That's almost like asking my teachers to work longer and not paying them,” Ward said.

What’s more, Ward worries about the impact the disruption will have for his students — especially if teachers continue to call in sick.

“My district probably has more to lose than anyone because my district is heavily concentrated with poor, minority students, students who need that consistency every day,” he said. “A disruption for those kinds of kids is epic, it's monumental, it’s paramount.”

For small and rural districts, having enough school personnel in the building has been a long-standing challenge. The Tarkington Independent School District, for instance, was recruiting custodians and bus drivers even before the pandemic.

Tarkington ISD Superintendent Marc Keith said many of his employees have had to wear different hats when others call in sick. Coaches are certified to drive buses and will complete bus routes. Administrators have often been on the food service line when there aren’t enough cafeteria workers.

Several Texas school districts have also struggled to obtain substitute teachers, and some have even tapped parents to watch over classrooms.

Keith is concerned about the stress all this puts on his healthy employees.

“They end up with, if we're not careful, burnout just from them having to pick up extra duties,” he said. “Is there any light at the end of the tunnel? Because about the time we feel like, OK, we've got this under control, here it comes again.”

Correction, Jan. 13, 2022: An earlier version of this story stated that Hutto resident Maze Ikeen takes about four hours to drop off or pick up her three children from school after the Hutto Independent School District discontinued regular school bus operations this week. She later clarified each journey takes her about three hours.