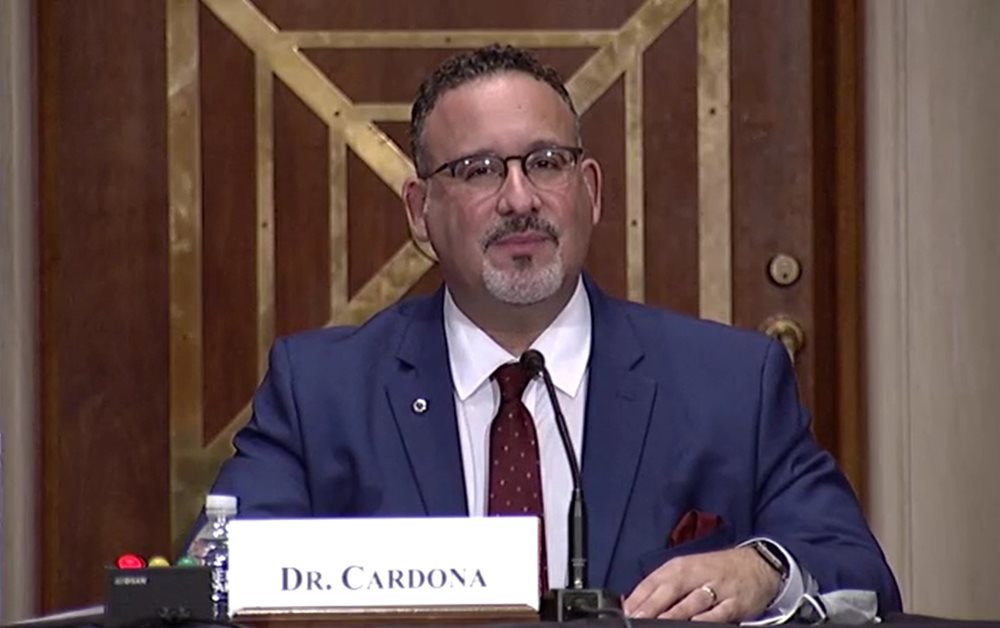 Committee Chairwoman and former preschool teacher Sen. Patty Murray (D-Washington) and ranking member Sen. Richard Burr (R-North Carolina) opened the hearing with remarks on the state of education in America and what they believe must be done. Murray cited closing learning gaps and addressing racial disparities in educational access and outcomes, Burr emphasized pausing federally mandated state standardized tests. Burr said he expects to vote for Cardona and urged his colleagues to do the same and allow the process to move “as expeditiously as possible.” Murray said she plans to schedule a confirmation vote for Cardona as soon as possible.

Here are some highlights of Dr. Cardona’s remarks to the committee.

REOPENING SCHOOLS: Cardona said we have to do everything we can to reopen schools safely and that “there is no substitute for a classroom experience for our students.”

TESTING AND ACCOUNTABILITY: Cardona doesn’t think we need to bring students into schools just to assess them on a standardized test. However, he added, “If we don’t assess where students are and their level of performance, it will be difficult for us to provide some targeted support.” Rather than blankly stating whether the federal government would grant testing and accountability waivers, Cardona said states should be able to “weigh in” on how they plan to implement tests or if those tests should be tied to accountability measures.

PRIVATIZATION: On a question relating to private school choice and charter schools, Cardona said he recognizes that there are excellent examples of charter schools and phenomenal examples of neighborhood schools. He did not comment specifically on private school voucher proposals, though he said he doesn’t want to support a system of “winners and losers” and that he is a strong proponent of making sure all schools are quality schools. Cardona also said most parents want to send their children to the neighborhood schools, which are usually the first choice for families.

CLASS SIZE: Cardona was asked if COVID-19 relief funds should be spent to build classrooms, hire teachers, and lower class sizes – and if the correlation between lower class size and achievement was really true. Cardona said while numerous studies have shown that classroom size isn’t the most important indicator, he believes, as a former educator, that having fewer students in a class allows for more specialized attention.

MENTAL HEALTH: Cardona believes that the mental health needs of students should be part of our pandemic response, which includes providing wraparound supports.

ENGLISH LANGUAGE LEARNERS: Cardona’s family and his background as an English language learner from Puerto Rico is an important part of his story. He began his remarks with, “Soy Miguel Cardona.” He believes that schools should respect the value of bilingualism and biculturalism.

DISCIPLINE: It is important to give students voice on issues of discipline and bringing a stronger sense of community into schools, Cardona expressed. He believes in restorative justice techniques and the importance of disaggregating data to make sure disparities between student groups are addressed.

RURAL EDUCATION: Cardona believes rural communities shouldn't be an afterthought and that he is committed to ensuring rural needs have a seat at the table.

PATHWAYS FOR STUDENTS: Cardona believes we need to alter our thinking to combine goals for students to go to college with goals for students to engage in career and technical pathways. Cardona is also a strong proponent of community colleges and their role in helping students achieve post-secondary success.