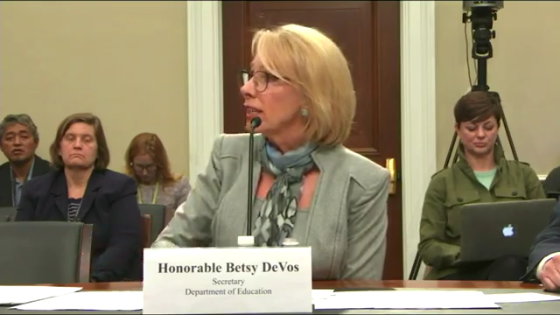 U.S. Secretary of Education Betsy DeVos issued guidance in late April that directed public school districts to use their federal emergency funds under the CARES Act to provide "equitable services" to all non-profit private school students in their bounds. After building strife among education stakeholders and leaders, DeVos has now announced that her department will be "issuing a rule on the topic in the next few weeks and inviting public comments."

There are two main differences between DeVos's new interpretation of equitable services under the CARES Act and its strict interpretation under federal education law. Under various titles of federal education law (Title I, Part A; Title II, Part A; Title III, etc.), a school district's duty to provide equitable services is based on students residing in a public school's attendance area and the proportion of children who meet the criteria of that title, such as students who are from low-income families, migrants, or English language learners. The provision of services, such as tutoring or teacher professional development, is meant to make the private school option commensurate with the public school option for those students. DeVos's novel interpretation argues that these eligibility criteria don't apply for CARES Act funds, even though 90% of the funds are distributed by Title I formulas.

As reported last week by Politico, U.S. Senator Lamar Alexander (R-TN), who chairs the U.S. Senate Health, Education, Labor, and Pensions Committee, agrees with many others that DeVos's interpretation differs from what Congress intended. "My sense was that the money should have been distributed in the same way we distribute Title I money,” said Alexander, adding, “I think that's what most of Congress was expecting.”

DeVos has received negative feedback on this issue from members of Congress, state education leaders, and other groups. Among them is the Council of Chief State School Officers (CCSSO), which has argued that the department's new interpretation is inequitable. Some states, including Maine and Pennsylvania, for instance, have decided to ignore the secretary's guidance. Others such as Tennessee and Texas plan to require their school districts to heed the secretary's recommendations, as we have reported here on Teach the Vote. The threat of rulemaking to formally codify DeVos's interpretation is clearly meant to bring in line those jurisdictions that have objected to expanding the CARES Act funding eligibility.

In a May 22 letter (written in the form of a reprimand), DeVos responded to the opposition from CCSSO, using it as an opportunity to announce her intent to initiate the rulemaking process. The announcement marks a shift in tone and intensity, as the department's move to a formal rule instead of guidance is much more binding. In the letter, DeVos argues that for purposes of the CARES Act, an interpretation of equitable services that only acknowledges students traditionally served by the provision under federal education law would discriminate against all other private school students, including those who are wealthy or otherwise advantaged. The secretary notes that 90% of the emergency funds appropriated by Congress through the CARES Act are directed toward public school students. While seemingly acknowledging that the CARES Act funds were based on the enrollment of students in public schools and flow through a Title I-based formula, DeVos insists in her letter that all students have been impacted by the pandemic. "The virus affects everyone," writes the secretary.

As many educators know, equity is not equality. Equity makes up for inequalities in society by directing more resources and supports to those who need them the most. Providing "equitable services" to advantaged students on the grounds that these students are otherwise being discriminated against effectively nullifies the entire intention of equity. The federal government's new approach to equitable services is actually more likely to widen the opportunity gap between our nation's students.

ATPE has already communicated with our state's congressional delegation about this issue will continue follow the rule-making process closely as it develops. Check back on Teach the Vote for updates and follow Teach the Vote on Twitter.