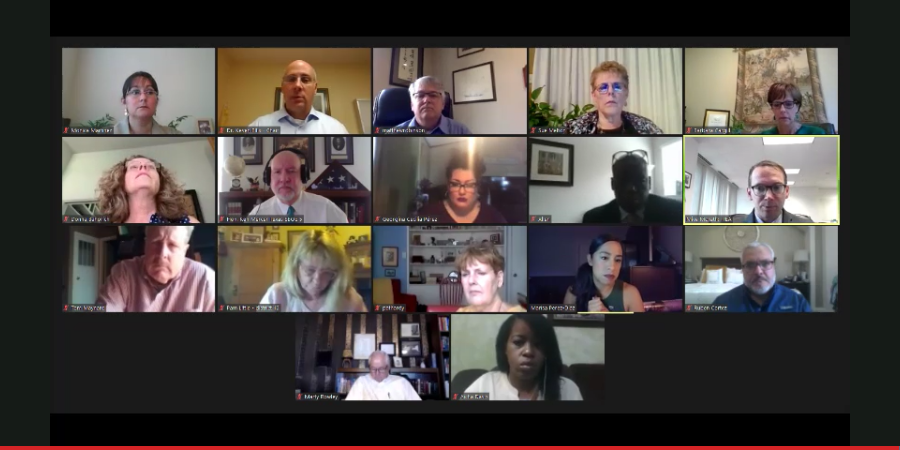 The Texas State Board of Education (SBOE) is holding its June meeting this week. On Monday, the board heard over 12 hours of testimony from more than 250 people on the review of the Texas Essential Knowledge and Skills (TEKS) for physical education and health TEKS. The board's discussion of these TEKS was pushed to Tuesday's meeting.

On Tuesday, the board began with an appearance by Texas Education Commissioner Mike Morath, whose comments were primarily related to education issues stemming from the current coronavirus pandemic. Because Texas lacks end-of-year student learning data, Morath pointed to an outside study on the blended learning tool "Zearn," which showed disparate outcomes in learning between students with different wealth measures. Morath did note that data will likely be released today on Texas public school student engagement, which was gathered by teachers in the spring. Morath stressed that we cannot allow the public health crisis to become an educational crisis and discussed transitioning from crisis-mode instructional support to instruction, in order to minimize learning loss.

As we previously reported here on Teach the Vote, Morath explained that the Texas Education Agency (TEA) has used its waiver authority to set up two new school finance mechanisms, which will allow districts to receive funding for either a synchronous or asynchronous remote instructional model next school year. In a later answer to a question by board member Marisa Perez-Diaz (D-Converse), Morath explained that attendance (tied to schools' ability to receive funding) in the asynchronous method of remote learning will be specifically determined through a district's definition of progress and engagement, which must abide by an already established framework defined by TEA. Morath stressed that it is essential to get as many children back in school as possible and as quickly as possible, but the commissioner said he understands that it may not be safe for some children to return to school.

Morath stated that the risk of COVID-19 infection, transmission, and complications in children is much lower than for adults and expressed confidence that districts can implement enough strategies and protocols so that parents feel safe sending their kids to school. This appeared to leave some board members wondering, "What about the teachers?"

Board member Ruben Cortez (D-Brownsville) later asked the commissioner to address how the agency is prepared to protect educators and deal with infected school employees who have to miss school or quarantine. Morath pointed to the agency's provision of personal protective equipment (PPE) such as face shields, plus guidance the agency has provided to districts suggesting screening protocols and considerations for higher levels of distancing. Similarly, member Aicha Davis (D-Dallas) later asked Morath if there was going to be any state support for teachers who are pregnant or have asthma, to which Morath responded that it will be left up to school districts to address this issue, and TEA has provided them guidance regarding staff who fall into a high-risk category. Morath suggested that there would not be any additional state financial support for districts in dealing with this issue of accommodating staff around such COVID-19 concerns.

During his presentation, the commissioner commented on the financial situation facing Texas public schools. He stated that while negative downturns in the economy will impact tax revenue, Texas has not announced cuts to public education funding and does not plan to cut funding in the coming years. Morath explained that the Elementary and Secondary School Emergency Relief (ESSER) fund created as part of the federal CARES Act will be used to execute the "hold harmless" provision for Average Daily Attendance (ADA) that the agency recently announced. This means that cuts to funding in the coming year will not be necessary, according to the commissioner. In addition to the ESSER funds, half a billion dollars will be allocated through the Coronavirus Relief Fund (CRF), also part of the CARES Act, which will fund 75% of schools' coronavirus-related expenses incurred during the 2019-20 school year. Morath said the state also plans to provide PPE to every school district, fund access to broadband and digital devices through Operation Connectivity, and offer the free, optional Texas Home Learning platform and resources for districts that do not already have a learning management system (LMS) in place. The commissioner added that 24% of Texas students needed paper learning resources this spring, which is likely why connectivity and access to devices are a large focus of how the state plans to spend its emergency funds provided by Congress.

When board member Davis asked the commissioner how racial equity would be addressed in his agency's efforts, Morath referenced the increases in funding that resulted from the legislature's passage of House Bill 3, Operation Connectivity, and the Texas Home Learning network. Similar to his previous positions, the commissioner suggested that each district is responsible for closing the gaps and that TEA can only provide robust resources within the limits of the agency's own funding. Member Barbara Cargill (R-Conroe) asked Morath how the Texas Home Learning network was being vetted and what was being done to ensure that it will not become the next CSCOPE. Morath responded that the new home learning resources were meant to be extremely transparent and available to the public, but the commissioner added that he would like those resources eventually to be vetted by the SBOE.

Board member Tom Maynard (R-Florence) asked about TEA's future plans for administering the STAAR test. Morath answered with a long-winded explanation of why assessments are important for measuring learning for diagnostic purposes and emphasizing the correlation between STAAR test scores and future outcomes for students. To provide districts some flexibility, the commissioner stated that the agency has extended the testing window for the coming school year and that there will likely be future adjustments to the A-F accountability system to compensate for not being able to calculate growth. In response to a question by board member Georgina Pérez (D-El Paso), Morath said he isn't sure if Texas will be requesting another testing waiver from the federal government in the upcoming academic year.

The SBOE will continue to meet through Thursday of this week. Find the full agenda here.

For all information and guidance that TEA has provided to districts during the pandemic, visit the TEA COVID-19 Support page. Be sure also to check out ATPE's Coronavirus FAQ and Resources for frequently updated information for educators about issues related to COVID-19.