Beyond candidates: The rest of the story on voting in the 2022 Texas primaries

Texas primary elections are coming up March 1, 2022, with early voting opportunities from Feb. 14-25. In this post, we share insights on choosing a primary, learning what to expect from your ballot, and understanding what is at stake with your primary vote. Plus, we’ll explain how the runoffs work and how a political party can use ballot propositions to shape its platform.

Texas has an open primary system, meaning that you can choose to participate in either the Republican or Democratic party primary, but not both. You do not need to declare an affiliation with a political party when you register to vote in Texas.

Due to demographic trends and the way district maps are drawn by the Texas Legislature, most voting districts in Texas will lean so heavily in favor of a single political party that there is little chance for a candidate in the opposing party to win. In some of these districts, only candidates from the favored party will file to run for the office – which means the primary election will determine who ultimately wins the office. Some candidates face no opposition in the primary but will have an opponent on the November general election ballot. That’s why we encourage you to learn about all the candidates who are running in your area and pick the party primary in which your vote will make the most difference on March 1.

We encourage you to research and build your ballot before you head to the polls. Nonpartisan entities such as the League of Women Voters offer online tools to help you see exactly what will be on your ballot. Also, make sure you print out your personalized ballot before you go vote. It is against the law to use a cell phone while voting, as explained in this recent blog post on Teach the Vote.

Remember: Voting in a party primary does not bind you to vote for that same party’s candidates in November. You can vote for any candidate from any party or even independent candidates with no party affiliation during the general election.

As we mentioned above, in some Texas races, all the candidates are affiliated with the same political party. This is often due to the manner in which the district has been drawn to favor one party over another. In these races, the winner of the primary election will face no opposition in November and therefore will automatically become the person who takes office in Jan. 2023. Obviously, it is critical to vote in the primary election in which these candidates are running if you are a voter looking to help determine the winner of that particular office.

For 2022, the following are such “winner-takes-all” races in which the only contest will be on the primary election ballot. If you live in one of these districts, please research the candidates on Teach the Vote and consider voting in their primary election.

Several of the races on your primary ballot will include more than two candidates. If no one candidate receives at least 50% of the vote in the March 1 primary, a runoff will be necessary to determine the winner of the primary. Texas Tribune Editor Ross Ramsey wrote in a Feb. 9 editorial, “Runoff elections are invigorating for challengers and terrifying for incumbents, and some of the biggest races on this year’s ballot might not be decided until then.”

This year, the party primary runoff elections are scheduled for May 24, 2022.

When early voting begins Feb. 14, registered voters in our state will have a chance to pick candidates vying for statewide offices such as governor or lieutenant governor, legislative seats, and host of others. But candidates aren’t the only thing you’ll be voting on during the upcoming primary election. Your primary election ballot may include a few additional items on which you can vote. 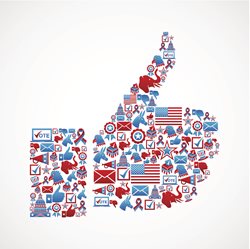 The major political parties often use the primary election as a tool to help shape their party platforms every two years. The leaders of each party select a handful of ballot propositions to present to voters on their primary ballots. These questions do not change the law in any way or have any binding effect, but they act as a sort of poll or survey to help party leaders understand which issues are most important to their own voters Ballot propositions allow the party an opportunity to reframe its political agenda and telegraph future campaign themes. They also give the party’s voters the opportunity to provide feedback to party leadership with their votes on the propositions.

If you plan to vote in the Republican primary this year, be sure to read and consider the ballot propositions and decide whether you agree or disagree with the party’s proposed position on each issue. A “yes” vote means you agree with the position, while a “no” vote means you disagree. Some of the ballot measures do relate to public education, such as the GOP’s proposition number relating to school curriculum and proposition number nine, which calls for allowing taxpayer funds to be used for private schools.

Your vote during the primaries on non-binding ballot propositions is a chance to share your input on what ultimately makes it into the official state platform of the political party.

The party platform has an important role in determining what types of bills the party leaders will prioritize during the next legislative session. Most ballot propositions are designed to be approved by the majority of the party’s voters, but not always. Even if the majority of the voters agree with a ballot proposition, the percentages of those voting “yes” or “no” can give the party leadership additional insight into the relative popularity of the issue compared to other issues on the ballot.

Below are the party platform propositions that will appear on the Republican primary ballot for 2022.

Thank you for all this vital information!