The Association of Texas Professional Educators (ATPE) responded Tuesday to a politically motivated book inquiry demanded by state Rep. Matt Krause (R-Fort Worth), who has announced his intent to run for statewide office in 2022. 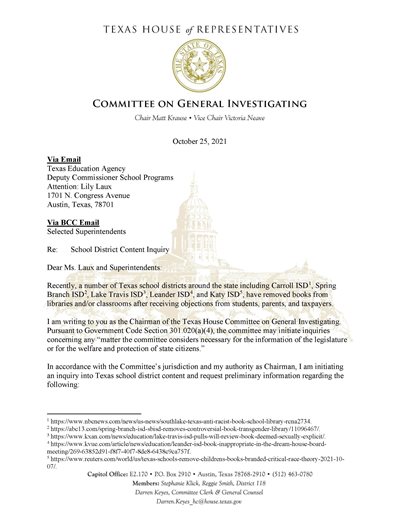 Krause, who chairs the House Committee on General Investigating, sent a letter Monday, Oct. 25, 2021, addressed to the Texas Education Agency (TEA) and “selected superintendents” announcing an inquiry on behalf of his committee into “school district content.” The letter demands that the districts, which are unnamed, review a 16-page list of hundreds of books Krause has deemed concerning.

Krause is also asking each district to provide the same information for “any other books or content” not necessarily on the list that contain the topics of “human sexuality, sexually transmitted diseases, or human immunodeficiency virus (HIV) or acquired immune deficiency syndrome (AIDS), sexually explicit images, graphic presentations of sexual behavior that is in violation of the law, or contain material that might make students feel discomfort, guilt, anguish, or any other form of psychological distress because of their race or sex or convey that a student, by virtue of their race or sex, is inherently racist, sexist, or oppressive, whether consciously or unconsciously.”

The lawmaker’s inquiry echoes themes debated extensively this year over such bills as House Bill 3979 enacted in the regular session and Senate Bill 3 enacted in the second special session. According to the authors of the legislation, both laws seek to ban schools from teaching concepts that have been associated with “critical race theory.” HB 3979 prohibits educators from including in social studies course requirements “the concept that… an individual should feel discomfort, guilt, anguish, or any other form of psychological distress on account of the individual's race or sex.” Rep. Krause’s letter mirrors that same language, although ATPE notes that there is nothing in HB 3979 requiring school districts to review books that might contain references to similar concepts.

Rep. Krause is an attorney who was first elected to the Texas House in 2012. He recently announced his intent to run for Texas Attorney General, challenging incumbent Ken Paxton in the 2022 Republican primary election.

“This is yet another attempt by a legislator eyeing higher office to shore up street cred with the political base by dividing parents and educators in the public education community,” said Holmes. “Moreover, it’s a waste of taxpayer resources for school districts, which are already grappling with big issues, including staffing shortages and student learning losses, due to pandemic-related challenges and new laws enacted by the Legislature this year. We hear every day from teachers who are losing their planning time to cover classes because there are too few substitutes. Administrators are struggling to staff both in-person and online classrooms, plus tutoring sessions now mandated for many students. Districts do not have the added bandwidth to meet this onerous and unnecessary request, and it will be student instruction that suffers.”

The State Board of Education (SBOE) has the sole authority to set curriculum standards and evaluate instructional materials. Krause attempted to justify his inquiry under statute granting the general investigative committees of legislature the authority to initiate inquiries concerning “matter the committee considers necessary for the information of the legislature or for the welfare and protection of state citizens.”

The letter echoes a trend over the past legislative session of steering controversial education policy decisions away from the formal policymaking bodies – the SBOE, House Public Education Committee, and Senate Education Committee – where educators can provide input. Krause has not scheduled a public hearing on the topic he is pursuing, purportedly on behalf of his committee. The letter calls for TEA and districts to provide a response by November 12, 2021.

Related: Read media reporting about the Krause inquiry and ATPE's response (subscriptions may be required for access):