ELECTION UPDATE: Continuing his series of posts about news pertaining to Texas elections, ATPE Lobbyist Mark Wiggins provided an update this week on campaign announcements that continue to trickle out each week. Read the latest election-related news from ATPE here. We also recognized National Voter Registration Day this past Tuesday by encouraging educators and others to register to vote. The next big election here in Texas occurs on Nov. 5, when voters statewide will be considering a number of proposed constitutional amendments, and those in some parts of the state will be voting in special elections to fill legislative vacancies.  The deadline to register to vote in that election is Oct. 7. Early voting begins Oct. 21. 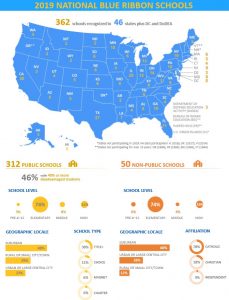 On Thursday, Sept. 26, the U.S. Department of Education (ED) announced that 362 schools around the country have been recognized as 2019 National Blue Ribbon Schools. The list of 2019 honorees includes 27 schools in Texas. According to an ED press release, the Blue Ribbon schools are recognized for their overall academic performance or for their progress in closing achievement gaps among student subgroups. The recipients of the Blue Ribbon designation include public and private elementary, middle, and high schools. The public schools are nominated by each state's top education official, while private schools are nominated by the Council for American Private Education (CAPE). An awards ceremony for the winners will take place in the nation's capital in mid-November. 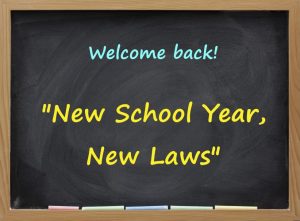 ATPE's lobbyists have been featuring a series of blog posts here on Teach the Vote about new education laws passed by the Texas Legislature in 2019. For this week's edition of the blog series, ATPE Lobbyist Andrea Chevalier highlighted a handful of bills that pertain to mentoring, training, and other professional opportunities for educators. Next week, our focus shifts to new statutory requirements related to educators' professional responsibilities. Watch for the new post here on Monday, and also check out the ATPE legal department's publication, “Know the Law: An Educator’s Guide to Changes Enacted by the 86th Texas Legislature.”

The Texas Education Agency (TEA) is also continuing its video series to help educators learn more about the landmark school finance and reform bill passed this year, House Bill (HB) 3. Check out the most recent videos from the agency in its HB 3 in 30 series dealing with school board and district goal-setting and the bilingual education allotment. 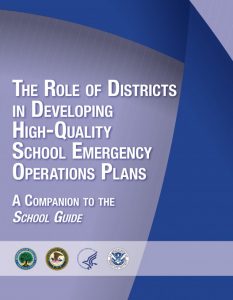 On Wednesday, the Trump administration released a new school safety district guide to schools develop emergency operations plans (EOPs). According to a press release from the U.S. Department of Education, the guide entitled "The Role of Districts in Developing High-Quality School Emergency Operations Plans" follows up on recommendations in the final report of the Federal Commission on School Safety. The district guide recommends responsibilities of school district administrators and their staffs, including coordinating with communicate partners and developing EOPs that address a variety of potential threats. The guide also includes checklists that can be used by school districts to track their progress.

Meanwhile, back here in Texas, Thursday marked the first organizational meeting for the new Senate Select Committee on Mass Violence Prevention and Community Safety. The nine senators heard only invited testimony, which included senior leadership from the Texas Department of Public Safety (DPS). Much of the conversation revolved around background checks and "red flag" laws aimed at keeping firearms out of the hands of those with mental illness or facing criminal complaints. Republicans on the committee questioned the need for additional legislation, while Democrats argued for strengthening the law and improving enforcement. You can watch a recap of the meeting on KVUE.

On Friday, U.S. House Ways and Means Committee Chairman Richard Neal (D-MA) introduced H.R. 4540, the Public Servants Protection and Fairness Act, in Congress. This bill is aimed at fixing the Windfall Elimination Provision (WEP) for future retirees and providing relief for current retirees. Under the bill, Social Security benefits would be paid in proportion to the share of a worker's earnings that were covered for Social Security purposes. The bill includes a hold harmless provision to ensure no one loses benefits relative to current law, and would provide $150 per month in relief payments to current WEP retirees.

"Members on both sides of the aisle can get behind this legislation and the solutions it puts forward," Chairman Neal said in a press release announcing the bill's filing. "I want to commend Ways and Means Committee Ranking Member Kevin Brady for his work to address the WEP issue for many years. He is a tireless advocate for affected workers, and I appreciate his commitment to fixing this problem. I look forward to working with him to move a solution through Congress expediently."

An overview of the bill can be found here, and the full bill text can be read here. Check back with Teach the Vote next week for a detailed analysis of the bill.