Texas election roundup: Change of address and no take-backs

This week's election news included a couple of eyebrow-raising developments. After announcing plans to leave the legislature to run for a local county commissioner position, state Rep. Mike Lang (R-Granbury) changed his mind and said he now plans to run for reelection after all.

In late-breaking news Friday, former State Board of Education (SBOE) Chair Donna Bahorich (R-Houston) announced she will not seek reelection. Bahorich chaired the board for the past two terms and was succeeded by Member Keven Ellis (R-Lufkin), who was sworn in as new board chair last week. While Bahorich won reelection by nearly 12 percentage points in 2016, her SBOE District 6 voted for Beto O'Rourke in 2018 by a four point margin.

Former U.S. Rep. Pete Sessions (R-TX 32) announced he will move from Dallas, where he lost his reelection bid to Democrat Colin Allred, to Waco, where he will run to fill the seat vacated by retiring Rep. Bill Flores (R-TX 17). U.S. Rep. Mac Thornberry (R-TX 13) became the sixth Texas Republican to announce his retirement ahead of the 2020 elections, leaving an opening in this solidly Republican, Amarillo-based district. In other federal races, Julian Castro told the audience at last weekend's Texas Tribune Festival that he will not challenge U.S. Sen. John Cornyn (R-TX) should the former San Antonio mayor's Democratic presidential campaign conclude unsuccessfully.

State Rep. Dan Flynn (R-Canton), who sits on the committee that oversees educators' pensions, was among several Texas House members who announced this week they plan to run for reelection. Amid the steady flow of similar announcements, at least one member – state Rep. Terry Canales (D-Edinburg) – alternatively suggested it's safe to assume he's running for reelection until he states otherwise. 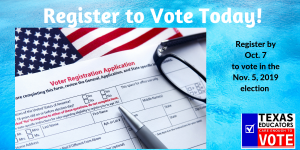 Finally, the deadline is Monday to register to vote in time for this November's elections. This is critically important if you live in one of the districts where special elections are taking place on Nov. 5 to replace state representatives who have stepped down prior to the expiration of their terms. One race in particular, the special election in northwest Fort Bend County's House District (HD) 28 to replace former state Rep. John Zerwas (R-Richmond), is expected to be close. Learn more about how to register to vote from our coalition partners at TexasEducatorsVote.com.

Remember, exercising your voice at the ballot box is the most powerful thing you can do to support public education!