The Texas State Board of Education (SBOE) met Wednesday, Nov. 13, 2019, in Austin for day one of its final meeting of the year. It is also the first SBOE meeting led by new board Chairman Keven Ellis (R-Lufkin). The meeting began with an update from Texas Education Commissioner Mike Morath.

Commissioner Morath started with a review of Texas students' most recent scores on the National Assessment of Educational Progress (NAEP). While fourth grade math scores have held constant at slightly above the national average, eighth grade math scores have been trending downward since 2011 and dipped below the national average in 2019. Fourth grade reading has seen a minute overall decline since 2005. Eighth grade reading scores showed the only statistically significant change since 2017, indicating a precipitous decline since 2013 to the lowest level since at least 2003. According to Morath, the main takeaways from the 2019 NAEP scores are that while Texas continues to outperform the nation in math, it lags behind in reading.

Moving on to a discussion of House Bill (HB) 3906 passed earlier this year, Morath indicated that changes are coming to the STAAR test. Under HB 3906, no more than 75 percent of STAAR questions can be multiple choice. The commissioner said meeting this requirement will take a couple of years to field test. The bill also required a study of STAAR readability after studies found STAAR test questions written at reading levels well above the grade level being tested. The study has been assigned to the University of Texas and is in process. The first round of results are expected to be delivered in early December, and another round will be delivered in early February.

SBOE Member Marisa Perez-Diaz (D-San Antonio) inquired how educators could have more impact on STAAR questions while minimizing their time away from the classroom. Morath suggested the agency attempts to schedule educator advisory committee meetings in a way to minimize disruption, and has worked with districts to provide substitutes. Perez-Diaz requested a link to the application and a copy of the screening process for educator involvement.

Commissioner Morath briefly addressed the recently announced Texas Education Agency (TEA) takeover of Houston ISD by summarizing the agency sanctions process. Perez-Diaz questioned Morath regarding the process for transitioning from an agency-run board of managers back to a locally elected body, and the commissioner indicated it would take multiple years. SBOE Member Lawrence Allen (D-Houston) also pressed the commissioner to explain the TEA's process for selecting a superintendent and members of the board of managers. The commissioner replied a committee is reviewing applications from prospective managers and he had made no decision yet who will be superintendent. 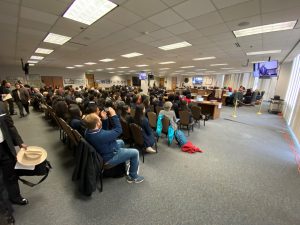 Additionally, SBOE Member Ruben Cortez (D-Brownsville) questioned Morath over whether the agency takeover would include a partnership under SB 1882 (passed in 2017 by the 85th Texas Legislature), which incentivizes districts to contract with charter schools that take over operation of one or more campuses in the district. The commissioner did not directly address whether that would be considered, and suggested that the managers would consider a wide array of options. Cortez also pressed Morath for details regarding what would happen if a campus is closed, to which the commissioner said that campus would simply cease to exist.

The board spent much of the day hearing testimony regarding a proposed new African-American Studies course. State Sen. Royce West (D-Dallas) was among dozens of witnesses who testified in support of the course. Chairman Ellis stated his goal is to have the course ready for students in 2020. The board will break into committees tomorrow and conclude its November meeting Friday.