From The Texas Tribune: Half of registered Texas voters turned out in 2018. Just 12% turned out this year.

By Alex Samuels and Stephanie Adeline, The Texas Tribune Nov. 6, 2019 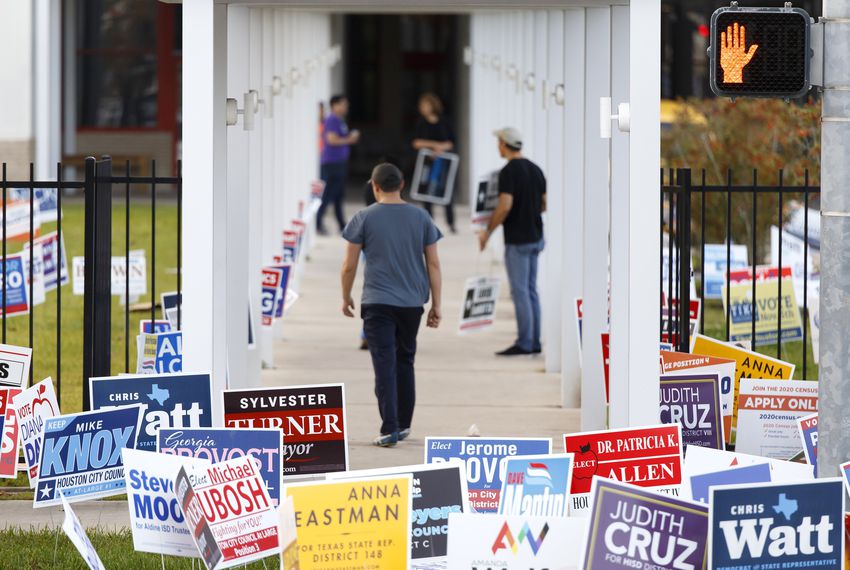 "Half of registered Texas voters turned out in 2018. Just 12% turned out this year." was first published by The Texas Tribune, a nonprofit, nonpartisan media organization that informs Texans — and engages with them — about public policy, politics, government and statewide issues.

Texas voters approved nine amendments to the state’s Constitution on Tuesday. Only 12% of registered voters actually cast ballots — a higher percentage from the 2017 election, but still overwhelmingly low overall.

A majority of Texas voters must approve any changes to the Texas Constitution. Getting a proposed amendment on the ballot requires support from more than two-thirds of both chambers of the Legislature.

Voters in some communities also weighed in on important local issues. For example, Houston voters weighed in on a contentious mayoral race, while Travis County voters approved a proposition authorizing 2% of the hotel occupancy tax to go toward renovating the Travis County Exposition Center.

Turnout is — and has always been — historically low in elections that take place during odd-numbered years. Here’s what it looked like this year. 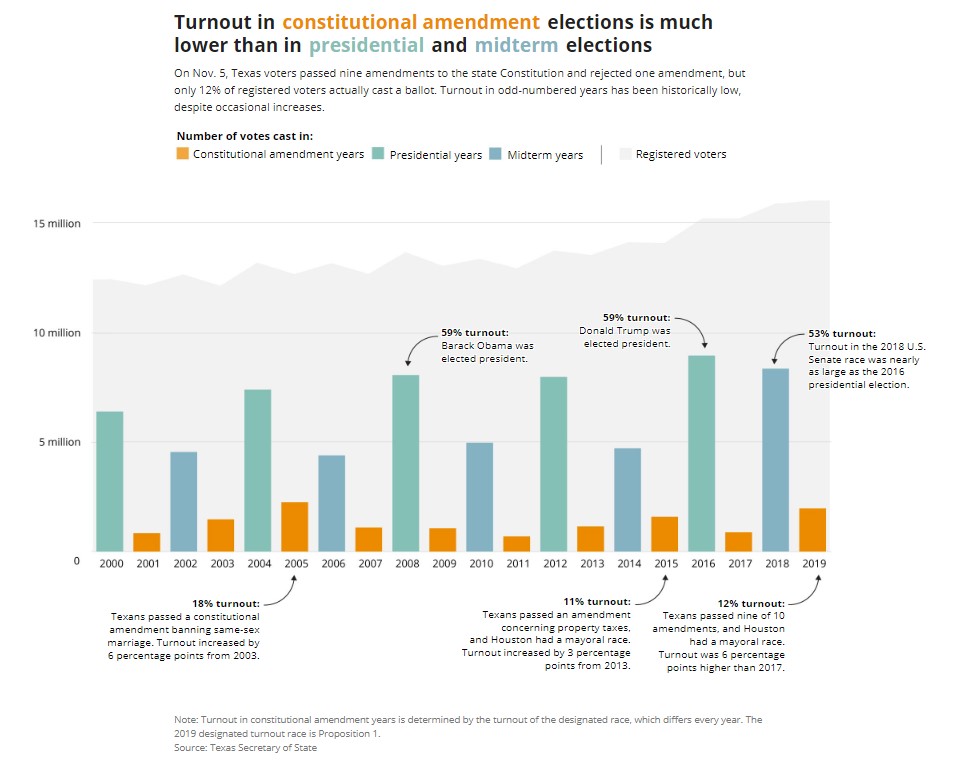 How easy is it to amend the Texas Constitution?

That simplicity, in part, is because few people vote in constitutional amendment elections. This year, 12% of registered voters cast ballots, compared with 6% of the state’s 15 million registered voters who voted in 2017. By comparison, 59% of eligible voters cast a ballot in the latest presidential election.

Unsurprisingly, turnout relies heavily on what’s on the ballot. Turnout in 2015 was higher than normal in part because of a Houston mayor's race and a state ballot proposition dealing with property taxes. In 2005, nearly 18% of registered voters cast ballots. That year, voters overwhelmingly approved writing a ban on same-sex marriage into the state’s Constitution. Twelve percent of registered voters voted in 2003, when a controversial amendment limiting lawsuit damages was on the ballot.

Do people vote on the whole ballot?

For the most part, yes. But they don’t have to.

Proposition 4, which would make it harder to enact a state income tax, received the most votes by a hair — roughly 1.97 million Texans who cast ballots weighed in on this change to the Constitution.

The closest race on the ballot was Proposition 9, which would allow the Legislature to create a property tax exemption for precious metals in state depositories like the Texas Bullion Depository. Proposition 9 also had the lowest turnout, with only 1.89 million Texans casting ballots — 79,057 fewer votes cast than there were on Proposition 4.

In 2005, more than 2.2 million people voted on the proposition concerning same-sex couples. The proposition with the fewest number of votes — an item focused on clearing land titles in Upshur and Smith counties — had only 1.9 million votes.

Turnout is hard to chart during constitutional amendment elections because of how the Texas secretary of state compiles data. A spokesman with the agency said voter turnout data is compiled based on a designated turnout race, even if it’s not the race with the most votes. This year, the designated race is Proposition 1.

Why was Proposition 4 so popular?

Supporters of the amendment said they wanted to provide assurance to residents and outsiders interested in doing business in Texas that the state is committed to a business-friendly environment; those in opposition argued the measure could tie the hands of future generations as they look to fund areas like education and health care.

Several left-leaning groups, including the Center for Public Policy Priorities, rallied against the proposal. CPPP says it launched digital ads in “targeted areas of the state” and sent a mail piece to tens of thousands of households.

Which counties had higher turnout than others?

One of the reasons for Harris County's higher turnout is because its county seat, Houston, is the only major Texas city that holds its mayoral race in November. (Dallas and San Antonio held their elections in May.)

This year’s Houston race drew considerable attention as first-term Mayor Sylvester Turner sought to fend off several challengers, including high-wattage trial attorney Tony Buzbee, who self-funded his campaign to the tune of $10 million. It’s also the first mayoral race to take place since Hurricane Harvey ravaged the Texas coast. Turner received 47% of the vote, compared with Buzbee’s 28%, sending the two to a runoff election slated for next month.

In addition to the rollicking mayoral race, Houston-area voters living in two state House districts had high-profile special elections on the ballot.

After the resignations of state Reps. John Zerwas, R-Richmond, and Jessica Farrar D-Houston, some voters in the Houston-area districts voted for their next state representatives. (Only Houston-area voters living in District 28 and District 148 cast ballots in these two races.)

Farrar’s seat is solidly blue; Zerwas’ seat, meanwhile, was a target for Democrats well before he announced he was resigning and joining the University of Texas System. Eliz Markowitz is the sole Democratic candidate in the race. Six GOP candidates have also lined up for the seat.

Carla Astudillo contributed to this story.

Disclosure: The Center for Public Policy Priorities, Tony Buzbee and the University of Texas System have been financial supporters of The Texas Tribune, a nonprofit, nonpartisan news organization that is funded in part by donations from members, foundations and corporate sponsors. Financial supporters play no role in the Tribune's journalism. Find a complete list of them here.

This article originally appeared in The Texas Tribune at https://www.texastribune.org/2019/11/06/texas-2019-election-voter-turnout/.