From The Texas Tribune: Welcome to Hell Week for the Texas Legislature

Analysis by Ross Ramsey, The Texas Tribune May 20, 2019
"Analysis: Welcome to Hell Week for the Texas Legislature" was first published by The Texas Tribune, a nonprofit, nonpartisan media organization that informs Texans — and engages with them — about public policy, politics, government and statewide issues. 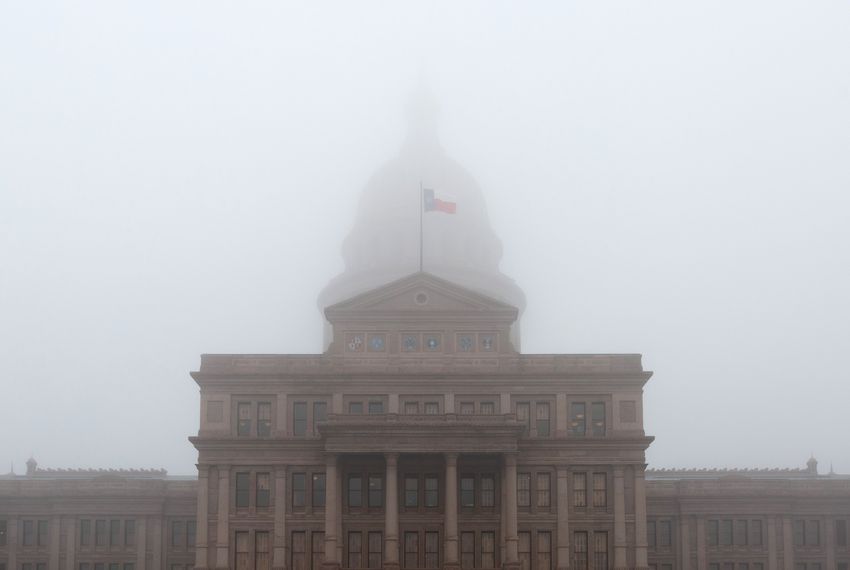 Dense fog blankets the dome of the Capitol in Austin. Photo by Emree Weaver / The Texas Tribune

Here at the beginning of a week in which most bills in the Texas Legislature will die, the big priorities set out at the beginning, in January, are still alive: school finance, property tax reform, school safety and responses to Hurricane Harvey.

Lots of other proposals are fading fast.

As of Friday, just over 5% of the 7,324 bills filed in the House and Senate this session had made it all the way to Gov. Greg Abbott’s desk. That tells you a bit about what will happen in the next few days. When this is over, when lawmakers have gaveled out on Memorial Day, that percentage will have jumped considerably. Two years ago, 18% of the filed bills made it to the governor. Four years ago, it was 21%. And in 2013, it was 24.4%.

But don’t just look at success; that won’t explain the dramatic tension of the next few days. Look instead at the overwhelming failure rate. Only about 1 bill in 5 — 1 in 4 in a good year — makes it out of a regular session alive. Everything else (that hasn’t found new life as an amendment to other legislation) meets its final end in the final week — when procedural deadlines form a bottleneck that most of the stampeding legislation doesn’t survive.

Those failures are not always surprising to the authors of bills, but failure is a tough ending when a legislator has worked for 20 weeks or more to make some changes in the state’s law books.

The big stuff is all right — at least for a minute — but other things you’ve probably heard or read about are in peril, a list that includes new laws that would allow people and businesses to discriminate when that’s based on “sincerely held religious beliefs”; limits on local residents’ ability to block oil and gas pipelines, power lines and other infrastructure projects; and loosening of the state’s current restrictions on medical marijuana. There’s also the Senate confirmation of Abbott’s Secretary of State appointee, David Whitley, who presided over the state’s botched search for noncitizens on the state’s rolls of registered voters and who’s out of a job if the Senate doesn’t confirm him before the session ends. Until Sunday night, it also included changes to election laws sought by Republican lawmakers; that bill didn't get onto the House's final calendar, but its provisions could find their way into other legislation before the session ends.

That’s a tiny sample of what’s in the air, and it’s changing fast. Some of the items on that list have already died once or twice, only to pop up in some other form. You’ll know in a week or so — after Memorial Day — what’s really dead and what really passed.

The Texas Legislature’s Doomsday Calendar — the dramatic name for the deadlines that stack up at the end of a regular legislative session — only has a few squares left.

Four of those are red-letter days:

The last day — the 140th — gets a Latin name, but not a red border. It’s sine die, the last day of the 86th Texas Legislature’s regular session.

Another clock starts then, marking the time between the end of the legislative session and Father’s Day — June 16 — the last day Abbott can veto legislation passed by the House and Senate.

That’s an important deadline, but it’s not one that legislators can control. Their ability to steer the state will ebb soon — but not just yet. For them, we’re entering make-or-break week.

This article originally appeared in The Texas Tribune at https://www.texastribune.org/2019/05/20/welcome-to-texas-legislature-hell-week/.