From The Texas Tribune: Texas Senate approves school finance reform bill, but opts not to fund it with a sales tax hike 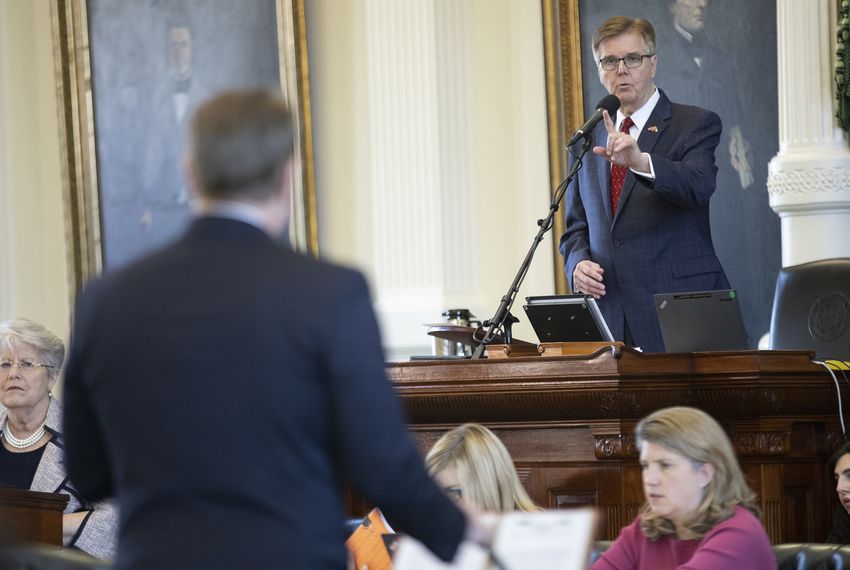 "Texas Senate approves school finance reform bill, but opts not to fund it with a sales tax hike" was first published by The Texas Tribune, a nonprofit, nonpartisan media organization that informs Texans — and engages with them — about public policy, politics, government and statewide issues.

The Texas Senate on Monday approved a bill to massively overhaul public school finance, but did so while backing away from a proposal to use an increased sales tax to lower school district property taxes.

After an hours-long debate on dozens of proposed changes, the Senate voted 26-2 on House Bill 3, which under the version passed by the upper chamber would increase student funding, give teachers and librarians a $5,000 pay raise, fund full-day pre-K for low-income students, and lower tax bills.

The House and Senate will have to negotiate their significant differences over the bill — including how to offer teacher pay raises and property tax relief — in a conference committee before it can be signed into law.

"When you're doing something as complex as this, there's going to be something you don't like," said state Sen. Larry Taylor, R-Friendswood, the bill's author, anticipating tension throughout the day's debate.

Since school districts levy the majority of property taxes in Texas, many lawmakers have been seeking ways to help reduce those portions of Texans' tax bills. But since the state is required to ensure school districts have enough money to educate students, any tax relief effort would have a significant cost — requiring the state to reimburse schools, if they're unable to collect enough from local property taxes.

Taylor had originally included several provisions that would provide ongoing tax relief, paid for by an increase in the sales tax by one percentage point.

Republican leaders, including Gov. Greg Abbott, had thrown their support behind that sales tax swap, arguing it would help Texans who are currently being taxed out of their homes. But the proposal has serious detractors in lawmakers from both parties in both chambers who are opposed to a higher sales tax.

So Taylor stripped the increase from HB 3 and offloaded some of the more expensive property tax relief provisions in the bill. The bill no longer includes an expansion in the homestead exemption from school district taxes. It lowers property tax rates by 10 cents per $100 valuation, instead of 15 cents, saving the owner of a $250,000 home $250 instead of $375.

The legislation would still limit the growth in school districts’ revenue due to rising property values, a proposal pitched before session began by the governor. School districts that see their property values significantly increase would have their tax rates automatically reduced to keep tax revenue growth in line. That would now start next year, instead of in 2023.

"The bill before us today has no linkage to the sales tax and is not contingent upon a sales tax," Taylor said.

Instead, the bill creates a separate "Tax Reduction and Excellence in Education Fund" to fund school district tax relief. State Sen. Kirk Watson, D-Austin, said a working group came up with a plan to get $3 billion from several sources, including the severance tax on oil and gas extraction and an online sales tax.

"This does not increase any taxes of any kind,” he said.

A few senators didn’t vote yes on HB 3 because they didn’t know the cost of the bill or how their school districts would be affected by it.

“The lack of a fiscal note delineating the total cost of the bill was unacceptable,” said state Sen. Charles Schwertner, R-Georgetown, who voted against the bill along with state Sen. Brandon Creighton, R-Conroe.

Creighton echoed those concerns about not knowing the legislation's price tag, though he said he agreed with its policy.

"Before the session ends, I will have another chance to vote on the final bill, and I look forward to supporting it once I have a clear understanding of the impacts on school districts in Senate District 4, and the true cost of the legislation, which will have implications for all Texas taxpayers," he said in a statement after the vote.

The House and Senate have passed versions of HB 3 that are similar in some ways: Both would raise the base funding per student — a number that hasn't budged in four years — and would provide about $780 million for free, full-day pre-K for eligible students.

Among the disagreements: how to make sure school employees get much-needed raises. The Senate has prioritized $5,000 pay raises for all full-time teachers and librarians. The House has directed districts to give all school employees about $1,388 in raises on average statewide and designated extra money for raises to be given at districts' discretion.

Senate Democrats' efforts to extend those $5,000 raises to full-time counselors and other employees failed along party lines Monday.

Also controversially for some, the Senate includes money providing bonuses to schools based on third-grade test scores and funding districts that want to provide merit pay for their top-rated teachers. Many teacher groups have opposed both, arguing it would put more emphasis on a flawed state standardized test.

State Sen. Beverly Powell, D-Burleson, failed to get an amendment to the bill approved that would strike tying any funding to third-grade test scores.

Teachers, parents and advocates following on social media had paid attention to Powell's amendment, mobilizing in support through a Twitter hashtag "#NoSTAARonHB3."

Taylor pointed out that the bill also allows school districts to use assessments other than the state's STAAR standardized test, which has lately come under renewed scrutiny, with researchers and advocates arguing it doesn't adequately measure students' reading abilities. He approved an amendment requiring the state to pay for school districts to use those alternative tests, which he estimated would cost about $4 million.

Emma Platoff contributed to this story.

This article originally appeared in The Texas Tribune at https://www.texastribune.org/2019/05/06/texas-senate-school-finance-sales-tax/.