Now that the bill filing deadline has passed and the 86th legislative session is beyond its halfway point, it's time for the legislature to do the one thing that it is mandated to do in every session: pass a budget. "Budget Day," though it doesn't have an official date in each legislative session, is when the House or Senate passes its version of a budget bill. Things get heated, legislators stay on the floor until the wee hours of the morning, staving off delirium to fight for every penny possible for their constituents' legislative priorities. At stake this session is the future of public education funding, deemed an emergency issue this session by Gov. Greg Abbott and a top priority of the leadership in both the House and Senate.

For its part on the school finance front, the House Public Education Committee unanimously approved Chairman Dan Huberty's (R-Kingwood) comprehensive school funding bill, House Bill (HB) 3, on Tuesday of this week after making a number of changes requested by ATPE and other education stakeholders. Those changes included removing a controversial merit pay proposal from the bill. Read more about the revisions made to HB 3 in this blog post by ATPE Governmental Relations Director Jennifer Mitchell. The new and improved school finance and tax reform bill is expected to be brought up by the full House for a floor debate within a couple of weeks.

With the momentum behind major public education bills like HB 3, it is now up to lawmakers to put aside enough money for the next biennium to make those school funding proposals a reality. On the House side, those budget decisions will be made via HB 1, which is the House's version of the budget bill that is scheduled for a floor debate next week. State representatives will be spending the weekend drafting and pre-filing their amendments to the massive budget bill before its lengthy budget debate happens on Wednesday, March 27. Stay tuned to Teach the Vote and be sure to follow us and our lobbyists on Twitter for updates on the budget debate next week. 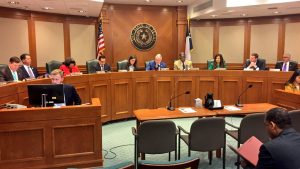 In addition to approving HB 3 earlier this week, the House Public Education committee also heard 21 other bills when it met on Tuesday, March 19. The subjects of the bills ranged from the compensatory allotment to a proposal to make personal financial literacy courses mandatory for graduation. The committee also voted to send 14 previously heard bills to the House floor, including the high-profile school finance and tax relief bill, HB 3. For more information on the bills heard during Tuesday's committee meeting, read this blog post by ATPE Lobbyist Andrea Chevalier. Next Tuesday, the committee will meet again to hear a long agenda full of school safety bills. 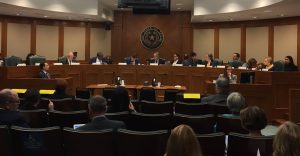 First, Senate Bill (SB) 12, by Sen. Joan Huffman (R-Houston) is on the calendar for debate by the full Senate next week. As we reported in last week's wrap-up, SB 12 was previously heard and approved by the Senate State Affairs Committee. SB 12 would shore up the educator pension fund by gradually increasing what the state, school districts, and educators contribute to TRS over a period of six years.

The second bill is House Bill (HB) 9 by Rep. Greg Bonnen (R-Friendswood), which is scheduled for a public hearing by the House Pensions/Investments/Financial Services Committee on Tuesday morning, March 26, 2019. ATPE will be testifying in support of the bill. HB 9 would increase contributions to the TRS pension fund placing the entirety of the responsibility of paying for the contribution increase on the state. It also provides for TRS retirees to receive a 13th check equal to up to $2400 of their annuity payment.

Despite their different methods, both of these ATPE-supported bills are aimed at making the pension fund actuarially sound, which would make it possible for the state to provide a much-needed cost of living adjustment to those retired educators who are receiving TRS benefits.