On Wednesday, March 13, 2019, the House Public Education Committee held its fourth hearing on bills. With 15 bills on the agenda, the topics covered included school start and end dates in Districts of Innovation (DOI), seizure training requirements, the assignment of students to uncertified teachers, concussion oversight teams, special education due process, suspension of students who are homeless, and adult education programs. 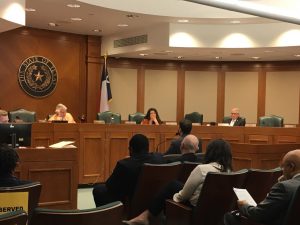 ATPE Senior Lobbyist Monty Exter testified in support of House Bill (HB) 1051 by Representative Gary VanDeaver (R-New Boston), which would improve and make permanent the Goodwill Excel Center, a public charter school that is currently a pilot program. Exter testified that while no program is perfect, this one is "as close as you can get" and has married Goodwill's 501(c)(3) dollars with state dollars to do more for students. Exter stated that the program gives more money back to its students than the system takes in state funding. Goodwill covers about 41 percent of the cost of operating the school. Furthermore, the leaders of the program have taken the time to create exceedingly high standards. Under HB 1051, these standards would be locked into law should the program be expanded. In closing, Exter testified that this program serves a unique set a students who are current not served by the public education system, adult dropouts, many of whom are over the maximum age which an ISD can enroll students. The Goodwill program found a gap that sorely needed to be filled.

ATPE also supported, but did not testify on, the following bills heard on Wednesday:

ATPE registered against HB 1133 by Rep. Jonathan Stickland (R-Bedford), which would change the calculation of K-4 class size limits to use a campus-wide average for each grade level rather than a hard cap applied to individual class rooms. ATPE supports state mandated class size and caseload limitations for all grade levels and instructional settings. This allows for optimal learning environments. ATPE also recommends that the state limit class size waivers and require full public disclosure of requests for class size waivers. Using the average calculation proposed by HB 1133 would mask the size of individual classes and allow for increases in some classes while maintaining a limited average. This opens the door to compromised educational quality and less individual attention for students in classes above the average. Rep. Stickland expressed that the bill was for Arlington ISD and said that he would be willing to bracket the bill to Arlington ISD. However, ATPE recommends maintaining current law on class size limits.

The committee also considered the following bills, on which ATPE took no position:

At the end of the hearing, Chairman Huberty stated that the committee would meet again at 8:00 a.m. next Tuesday. The next hearing will likely begin with the committee substitute to House Bill 3, the school finance bill.