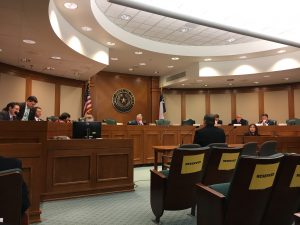 On Tuesday, March 19, 2019, the House Committee on Public Education heard 21 bills on a variety of topics, including compensatory and accelerated education services, elections, and the state's share of public education funding. Additionally, the committee voted out several bills, including Chairman Dan Huberty (R-Humble) and the Texas House's plan for school finance, HB 3. Read our blog post on HB 3 here for more information on what's in the bill.

The following bills were considered by the committee during yesterday's hearing:

The following bill was on the agenda but was not heard:

The following bills were voted out favorably by the committee, which means they will now move on to the House Calendars Committee and face judgement on whether and when they may come before the entire House of Representatives for a vote: HB 3, HB 55, HB 391, HB 613, HB 663, HB 692, HB 808, HB 811, HB 960, HB 961, HB 1133, HB 1480, and HB 2074. Rep. VanDeaver's HB 1051, which was heard last week and relates to the Goodwill Excel Center, was also voted out after VanDeaver and Rep. Alma Allen (D-Houston) came to an agreement that there would be a floor amendment to address her concerns about the bill.