Here's a look at this week's education news from ATPE Governmental Relations: 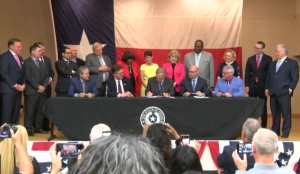 This week, Gov. Greg Abbott signed the school finance and property tax reform bill, House Bill (HB) 3, into law. This bill modifies how public schools are funded and attempts to shift some of the burden of paying for public education that has fallen heavily on the shoulders of local property taxpayers closer toward a balance point with the portion financed by the state. The bill also affects teacher compensation. Read a recap of the governor's signing ceremony, as well as links to our analysis of what HB 3 does, in this blog post by ATPE Lobbyist Andrea Chevalier.

Gov. Abbott also signed Senate Bill (SB) 12 into law on the same day. The bill improves funding for the state's pension system for educators. As a result of the bill's signing this week, the Teacher Retirement System (TRS) expects a 13th check to be sent to retirees this fall, with a more specific date to be discussed at the TRS board’s next meeting in July.

Stay tuned to Teach the Vote for updates as this legislation is implemented, and don't forget to check out ATPE's full recap of all the education legislation that passed this session. 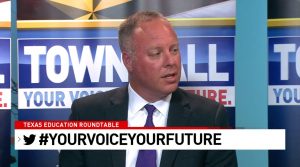 Speaking of HB 3, your ATPE lobbyists have been busy taking to the airwaves over the last two weeks to talk about the bill and its consequences for school finance and teacher pay.

Also discussing HB 3 on TV and radio programs this week was ATPE Lobbyist Mark Wiggins. He joined the statewide politics program Capital Tonight on Spectrum News this week to discuss how teacher compensation is affected by the bill. You can watch the segment here on the Spectrum News website.

The State Board of Education (SBOE) met this week in Austin, where a handful of applications for new charter schools came under scrutiny. On Thursday, a board committee voted to exercise the board's statutory authority to veto four of the five proposed new charters. Members expressed concerns over the fiscal impact, qualifications of the applicants, and accuracy of the applications. On Friday, the full board reversed course and voted to approve the new applications with one notable exception. Members voted 8-5 to reject the application for a new charter by the founder of Harmony Public Schools. Read ATPE Lobbyist Mark Wiggins's recap of Friday's SBOE meeting here.

Commissioner of Education Mike Morath also updated the board this week on legislation passed by the 86th Texas Legislature that will affect public education, including HB 3 and changes to the STAAR assessment. Several of the education bills that passed this session will also require rulemaking by the commissioner before they can be fully implemented. Read a recap of the commissioner's comments here. 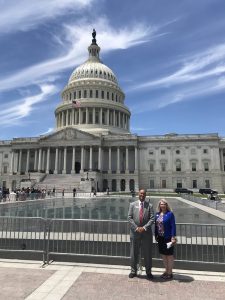 A group of ATPE state officers and lobbyists were in Washington, DC this week to discuss federal education issues with elected officials and their staffs. ATPE State President Byron Hildebrand and Vice President Tonja Gray were accompanied by ATPE Executive Director Shannon Holmes and Senior Lobbyist Monty Exter on the fly-in, which was organized by ATPE's longtime Washington-based lobbyist David Pore.

Issues discussed included education funding and the repeal of Social Security offsets like the Windfall Elimination Provision (WEP) that negatively impact educators and other public servants throughout the country. Stay tuned to our Teach the Vote blog next week for a complete report on these ATPE meetings in the nation's capital.

If you are an ATPE member who'll be attending the ATPE Summit in July, make plans to attend our legislative update session where the lobby team will brief members on these federal issues and the results of the recent Texas legislative session.