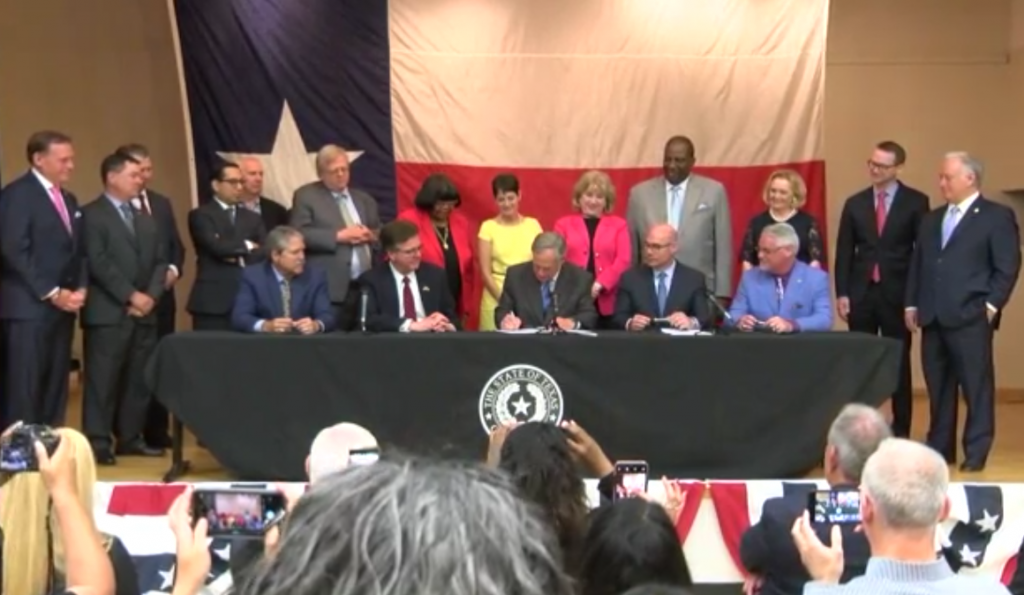 Just before noon today, Gov. Greg Abbott signed House Bill (HB) 3 into law. The bill signing took place in front of a crowd of reporters at an elementary school in Pflugerville ISD. The governor was flanked by his fellow members of the "Big Three," Lt. Gov. Dan Patrick and House Speaker Dennis Bonnen (R-Angleton). Also up on stage were members of the House and Senate education and finance committees, the superintendents of San Antonio ISD and Longview ISD, and Texas Commissioner of Education Mike Morath.

The ceremony began with remarks from Gov. Abbott about the importance of this legislation in improving school finance and reducing property taxes, with emphasis on the success of the legislature in working together on a solution in the absence of a court order. Lt. Gov. Patrick, Speaker Bonnen, Senate Education Committee Chairman Larry Taylor (R-Friendswood), and the bill's author, House Committee on Public Education Committee Chairman Dan Huberty (R-Houston), also spoke at the bill signing ceremony, giving thanks and praise for the efforts of those who collaborated on HB 3.

Notably, Speaker Bonnen thanked the people of Texas, for whom he said the school finance and reform bill had been passed. This remark is a testament to the power of educators and public education supporters across Texas who have made their voices known through voting and advocacy. As we watch the implementation of HB 3, some parts of which take effect immediately while others are delayed, ATPE will stay vigilant in ensuring the integrity of the promises made by our leaders. Stay tuned for more updates as implementation rolls out over the next several months. To learn more about what's in the bill, check out our detailed HB 3 blog post here.