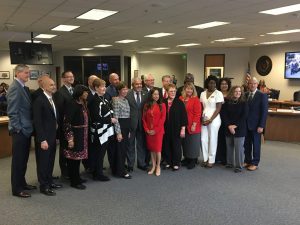 Members then adopted the board's operating rules. Among the changes, audience members will not be allowed to carry flags or noisemakers into the gallery area. This stems from an incident in 2018 in which a disruptive member of the audience brought a confederate flag into the gallery. Visual aids will still be permitted in the hallways and atrium outside the gallery.

The board engaged in a lengthy discussion of its authority with regard to charter schools, in particular when it comes to charter revisions or amendments. The board has the authority to veto new charter applications, but not necessarily when it comes to revisions or amendments. Some members expressed a desire to increase the transparency of amendment applications, but Texas Education Agency (TEA) staff suggested amendments are under the sole purview of the commissioner of education.

Members elected Marty Rowley (R-Amarillo) as vice-chair of the board and Georgina Perez (D-El Paso) as secretary. Members then assigned committees, which will each elect their own chair when they meet on Thursday. On the Permanent School Fund/School Finance Committee are Pat Hardy, Ken Mercer, Lawrence Allen, Donna Bahorich, and Tom Maynard. On the Instruction Committee are Sue Melton-Malone, Georgina Perez, Pam Little, Aicha Davis, and Marty Rowley. On the School Initiatives Committee are Barbara Cargill, Keven Ellis, Marisa Perez-Diaz, Matt Robinson, and Ruben Cortez.