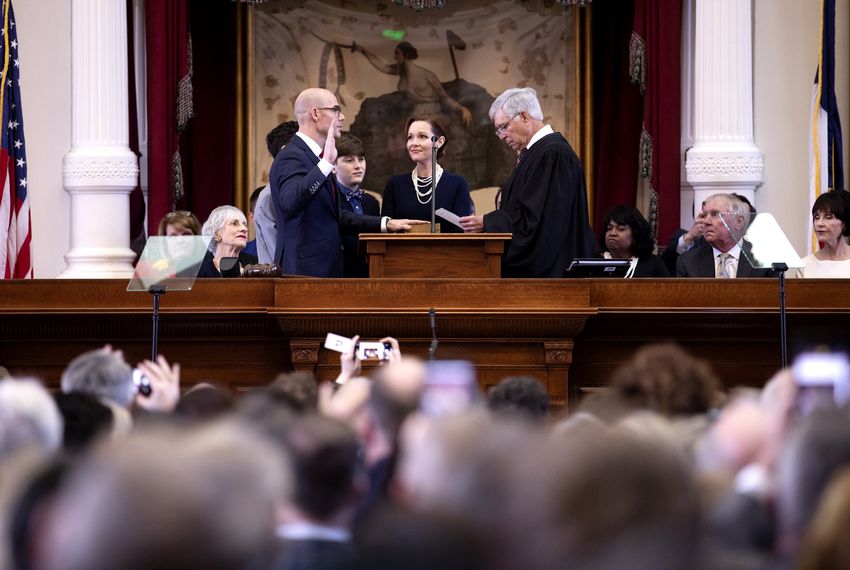 A gray fog descended on Austin Tuesday morning, but the scene inside the Texas Capitol was one of colorful festivities to mark the first day of the 86th biennial legislative session.

And perhaps the heartiest celebration took place in the Texas House, where lawmakers whooped and hollered after the unanimous election of state Rep. Dennis Bonnen as House speaker.

Bonnen’s election marks a new era of leadership in the lower chamber for the first time in a decade. The Angleton Republican replaced former House Speaker Joe Straus, who announced in October 2017 that he would not seek re-election. Straus, a San Antonio Republican who was elected in 2009, held a record-tying five terms in the House’s top seat.

Whereas Straus was known as a mild-mannered leader, Bonnen has developed more of a combatant's reputation in the House. He seemed to lean into that perception in his remarks. "I’ve never seen the use in sugarcoating things," Bonnen said. "I am direct and I am a problem solver."

Lawmakers praised his leadership ability in a series of speeches preceding the vote. State Rep. Senfronia Thompson, a Houston Democrat with 45 years of experience in the House, drew a standing ovation for her remarks, in which she said Bonnen “has learned the ins and the outs of the Texas House as well as anyone I’ve ever served."

The new speaker pledged to keep the Texas Legislature from getting "caught up in things that don't lead to real results." He named public school funding as his top priority, in addition to school safety, combating human trafficking and reforming property tax collection. He even went so far as to replace the drinking cups in the House members' lounge with new ones reading, "School finance reform: The time is now."

"You will be reminded every day," Bonnen said.

Bonnen's election was hardly a surprise; he first announced he had the votes to become the next leader of the lower chamber in November, working behind the scenes to assemble a transition team and hire a staff to assume the speaker’s office. In his closing remarks, after asking for unity among House members, he gave a tearful tribute to his father, recalling some advice from the elder Bonnen, who passed away in 2017.

"Let's be sure when we adjourn sine die we leave this House and this state better than we found it," he said. "There's a saying we have in Texas: As Texas goes, so goes the nation."

Meanwhile, the leader of the Texas Senate, Lt. Gov. Dan Patrick, was conspicuously absent on opening day. “He was called by the White House to discuss some issues that are critical to Texas," said state Sen. Jane Nelson, R-Flower Mound, who presided over the chamber in Patrick’s stead. Patrick's office later said the meeting was about border security.

Before a crowd of doting spouses and toddling grandchildren, Texas Supreme Court Chief Justice Nathan Hecht administered the oath of office to a slate of new and returning state senators. Among them were state Sen. Charles Schwertner, who gave up his powerful committee chairmanship last week after an inconclusive sexual harassment investigation, and incoming state Sen. Angela Paxton, who was accompanied by her husband, Texas Attorney General Ken Paxton.

Nelson, performing a duty traditionally left to the lieutenant governor, joked that she was certainly the first grandmother of 11 to gavel in a session of the Texas Legislature. Soon after, state Sen. Kirk Watson, an Austin Democrat and the former mayor of the capital city, was elected president pro tempore, a ceremonial role that puts him third in line for the governorship after Patrick.

Other visitors and guests of all stripes had gathered at the Capitol hours earlier, with palpable enthusiasm for another 140-day marathon of state government.

This massive pink granite structure is the site where, over the next five months, the two legislative bodies will make decisions that shape the daily lives of nearly 30 million people for the next two years. How crowded will student classrooms be? Where will new highways be built? Who deserves publicly funded health care?

But those debates will come later. On Tuesday, the mood was a mix of anticipation and nostalgia; for some the scene played out like the first day of school, for others a class reunion. Giddy celebration punctuated the pomp and circumstance.

The festivities reached all corners of the building.

Huddled in the Capitol’s rotunda, a group dubbed the “resistance choir” gathered for a finger-snapping rendition of Meghan Trainor’s “Dear Future Husband.” The group’s left-leaning membership has steeled itself for another difficult session in the Republican-led Legislature, but today, a kind of truce held.

“We’re just excited to be here. Today, we’re not here to protest,” said Anne Withrow, one of group’s members.

Elsewhere, children clutched their parents' hands and seemed eager to have their photos taken inside the historic building. Hustling around them, lobbyists sporting sharp business suits, phones pressed to their ears, shuffled upstairs to convene outside the House and Senate chambers. A few state lawmakers, too, shook hands with constituents and visitors.

A hoard of people outside dressed in Rastafarian green, gold and red held flags with pro-marijuana messages plastered to them. Across the street, in front of the Governor’s Mansion, climate scientists and activists assembled at a podium to call on Abbott to address global warming. By early afternoon, when the swearing-in ceremonies were finished and lawmakers adjourned for the day, the fog had dissipated.

Patrick Svitek contributed to this report.

This article originally appeared in The Texas Tribune at https://www.texastribune.org/2019/01/08/bonnen-speaker-texas-house/.