From The Texas Tribune: Momentum for "private school choice" in Texas fades in 2019

In 2017, top Texas lawmakers were galvanized for "private school choice." This year, momentum has faded. 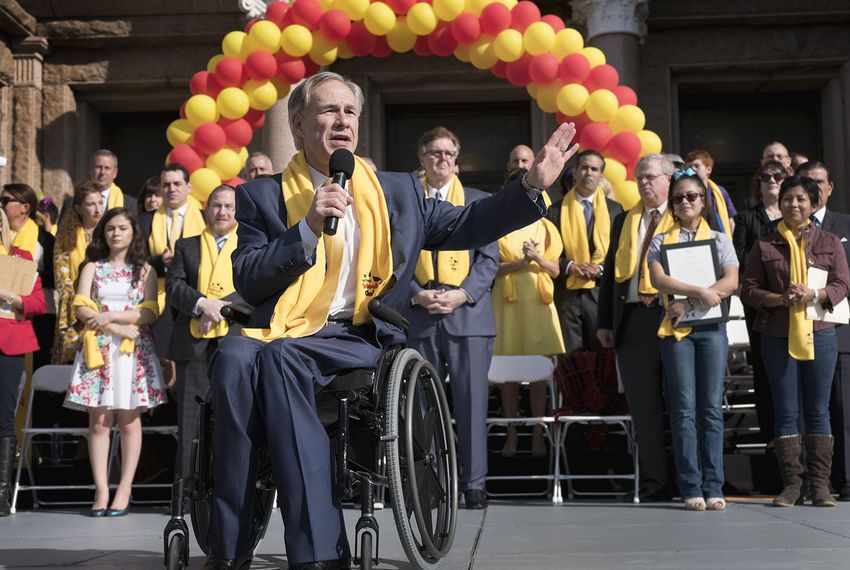 "In 2017, top Texas lawmakers were galvanized for "private school choice." This year, momentum has faded." was first published by The Texas Tribune, a nonprofit, nonpartisan media organization that informs Texans — and engages with them — about public policy, politics, government and statewide issues.

Two years ago, Gov. Greg Abbott and Lt. Gov. Dan Patrick stood on the steps of the Texas Capitol before a throng of waving yellow scarves and urged lawmakers to vote for programs that give parents state money to attend private schools.

This Wednesday, those two top Republicans may not even attend the rally for National School Choice Week, let alone have speaking roles.

Though "school choice" supporters will still excitedly don their signature bright yellow scarves Wednesday, they will likely be fighting an uphill battle the rest of this session to get support in the Capitol.

In the months after 2017's rally, House lawmakers unequivocally voted to reject school vouchers or similar programs that allow parents to use public money for private education. In 2018, a key election ousted some of the programs' largest supporters, including Rep. Ron Simmons, R-Carrollton, one of the loudest cheerleaders in the House. And as state Republicans tour the state making constituents a new set of education-related promises, many have swapped the words "school choice" for "school finance."

So far, even Abbott and Patrick have rarely brought up their former pet issue without being asked directly — beyond Abbott's routine proclamation for this year's School Choice Week. The new House Speaker Dennis Bonnen, an Angleton Republican, said last week that the House would not pass legislation approving vouchers — and that he had consistently voted no on similar bills.

"I'm not willing to say, 'hey, this issue is dead.' But leadership seems to be saying that, at least for this particular session," said Monty Exter, lobbyist for the Association of Texas Professional Educators, one of the biggest opponents of those programs.

The issue was politically divisive last session, with public school educators arguing it would siphon money from public schools. The Senate passed a diluted version of the bill that would allow parents of students with disabilities to pay for private school and homeschooling, with supporters arguing it would empower families to make the best educational choices for their kids. Facing resistance in the House, Senate leaders refused to approve an overhaul of the school finance system without those subsidies — forcing a stalemate.

Abbott demanded lawmakers pass both in a summer special session. Both failed to pass again.

Randan Steinhauser, who along with her husband Brendan has helped lead the fight for voucher-like programs in Texas, said both Abbott and Patrick have been invited to support the cause from the stage at Wednesday's rally. But they aren't scheduled to give formal speeches. Sen. Ted Cruz and Land Commissioner George P. Bush, both Republicans, are expected to speak and, she said, "having one elected official after another is not the most engaging thing for our audience."

Steinhauser and Texans for Education Opportunity founder Stacy Hock both say they are instead focusing on organizing families to speak directly to lawmakers.

"Thankfully, we will not be doing a huge lobby effort this session," Hock said. 'What has become apparent to me is that the most important voice in this discussion is that of Texas families."

Steinhauser rejects the idea that lawmakers got kicked out of office for supporting the issue.

"If that were the case, Dan Patrick would have lost. He's the biggest champion in the state and he's coming back for another term," she said. "No one won or lost on the issue of school choice."

But lawmakers appear to be putting distance between themselves and the issue, at least for the time being.

Sen. Larry Taylor, the Friendswood Republican who chairs the Senate Education Committee, told a group of free-market conservatives earlier this month that school choice "is not going to be the focus this session" and "not part of the school finance bill." That's a far cry from 2017, when he authored the Senate's bill for private school tuition subsidies.

But he's not alone in his change of tone. Two years ago, sporting a yellow scarf of his own atop a navy blue suit, Patrick expressed his disappointment with the Texas House in front of thousands of students and family members from charter schools and private schools.

"We want a vote up or down in the Senate and in the House this session on school choice," he said, amid loud cheers. "It's easy to kill a bill when no one gets to vote on it."

This year, when asked whether the issue would return to the Senate, Patrick was less direct: "We'll see, we'll see. It's a long session."

Disclosure: Stacy Hock and the Association of Texas Professional Educators have been financial supporters of The Texas Tribune, a nonprofit, nonpartisan news organization that is funded in part by donations from members, foundations and corporate sponsors. Financial supporters play no role in the Tribune's journalism. Find a complete list of them here.

This article originally appeared in The Texas Tribune at https://www.texastribune.org/2019/01/23/momentum-school-choice-vouchers-texas-fades-2019/.