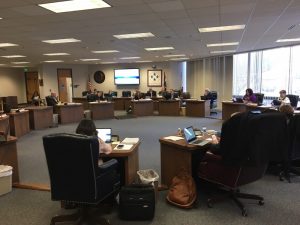 Morath began with a high-level review of the 2018 State of the State of Public Education annual report. Members asked the agency to produce a report detailing state scores on the National Assessment of Education Progress (NAEP) test.

The commissioner walked members through efforts by the agency to create Texas Essential Knowledge and Skills (TEKS) guides to help educators and parents better understand the standards and alignment, as well as resources to help understand assessments and student expectations.

Commissioner Morath briefed members on efforts to review the assessment process, including organizational restructuring to embed the STAAR team within the agency’s curriculum department, which ensures that staff who participate in the TEKS review process are the same staff developing questions for the assessment.

Morath also responded to a question about the state of teacher pay legislation in the 86th Texas Legislature. The commissioner noted that a bill has already been filed to give teachers a $5,000 across-the-board raise. There is also legislation in the works to create a differentiated pay program. Morath discussed the impact of higher compensation on teacher quality, and explained that this is primarily aimed at increasing retention and attracting higher quality candidates who may otherwise be turned off by the limited salary potential of teaching.

Tuesday’s meeting included an update from Member Keven Ellis (R-Lufkin) on the Texas Commission on Public School Finance, on which Ellis sat as the board’s sole representative. The final report can be found here.

Ellis said the commission's goals included balancing the state and local share of funding for public education, restructuring the system by reallocating outdated or otherwise inefficient weights and programs, and substantially increasing the level of equity with significantly greater investment in low-income, underperforming student groups. Goals also included reducing the growth rate of property taxes and reliance on recapture, as well as infusing significant state funds into public education.

The commission contemplated proposals to slow recapture and property tax growth, including the governor's plan, a plan by the Texas Taxpayers and Research Association (TTARA), and a share recapture plan. Ellis noted that the commission decided to allow the current legislative session to take up the discussion of revenues.

Responding to questions from other board members, Ellis suggested that the commission's findings will likely involve at least one large package, with additional pieces filed individually. New board Member Aicha Davis (D-Dallas) asked about the sustainability of Dallas ISD's "ACE" differentiated pay program. Ellis pointed out that the district's superintendent testified to the program's enormous cost.

The board will spend Wednesday hosting a learning roundtable at the Austin Convention Center, and will return to the TEA building on Thursday to break up into committees and elect committee chairs.