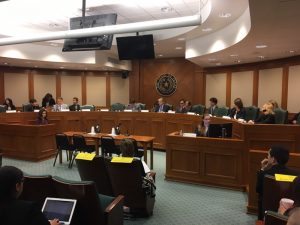 The Senate Committee on Education held its first meeting of the 86th Legislative Session on Thursday, Feb. 7, 2019, at the Texas Capitol. The committee's chairman, Sen. Larry Taylor (R-Friendswood) kicked off the meeting by welcoming members to "Season Three, Episode One" of his tenure as the committee chair, and introduced new and returning committee members.

Texas Education Commissioner Mike Morath provided high-level testimony on the "State of the State of Public Education" report produced by the Texas Education Agency (TEA). This report focuses on demographics, challenges, and progress toward the state's "60x30" goal of ensuring 60 percent of students graduate high school with an industry certification or post-secondary credential by the year 2030. Commissioner Morath again stressed the importance of recruiting and retaining high-quality teachers in order to achieve this goal.

The commissioner also walked members through the current "A through F" accountability system, which is largely based upon different calculations of STAAR test results. Related to that, the commissioner explained efforts to develop STAAR test questions aligned to student expectations. Morath discussed the negative impact of poverty on student learning, which prompted comments by the vice chairman, Sen. Eddie Lucio, Jr. (D-Brownsville), on related factors such as hunger. Both have a direct impact on the cost to educate a child.

In acknowledging criticisms of the STAAR test, including the high stakes attached to it, Commissioner Morath suggested the test could be broken into multiple, shorter sessions, or move away from multiple-choice answers. The commissioner noted that either could pose problems with regard to legal requirements and the time and money necessary for development.

Under the current accountability system, special education students are performing "significantly behind" their non-special education peers. Porter suggested this potentially could be ameliorated by changes to the current college, career, and military readiness (CCM-R) indicators.

The majority of Porter's testimony focused on the strategic plan put in place as a result of the corrective action order. Under federal pressure, the agency has increased monitoring activities and identifying areas of noncompliance and improvement. Under federal law, all students have a right to a "free and appropriate public education" (FAPE), and TEA has made efforts to inform local education agencies (LEAs) of their responsibilities. The agency is also hiring a contractor to launch a statewide media campaign to provide information about special education and parents' rights. Sens. Royce West (D-Dallas) and Paul Bettencourt (R-Houston) asked questions regarding the marketing program, including the total cost and whether districts and stakeholder groups had been recruited into the process.

Porter indicated there is also a shortage in evaluation personnel, which has resulted in many LEAs paying for contract personnel. The agency has responded with a $10 million grant to Education Service Center (ESC) 20 in San Antonio to provide services and reimbursements to LEAs without access to evaluators.

In addition, the agency has focused on professional development geared toward administrators and general education teachers, as well as training for school board members. The agency has also set up a call center to answer questions related to special education.