The House Committee on Appropriations met Monday to hear from the Texas Education Agency (TEA) and Teacher Retirement System (TRS) on the issues of school safety, school finance, the teacher pension system, and active and retiree educator health insurance. Before delving into the meat of the hearing, Cmomittee Chairman John Zerwas (R-Fulsher) also announced membership of the subcommittees that will be overseeing separate subject areas of the budget. 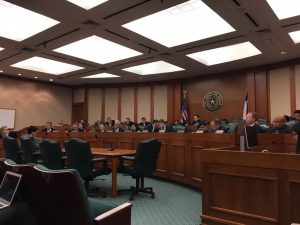 The committee heard first from Texas Education Commissioner Mike Morath on the topic of school safety, including physical precautions such as metal detectors and alarms. Morath noted there is no single investment in school safety that will address all current weaknesses and that the agency isn’t and hasn’t traditionally been tasked or resourced to help districts with regard to mental health components of school safety.

TEA's Chief School Finance Officer Leo Lopez followed with a high-level overview of how public schools are funded. Lopez explained how the basics of tax rates, weights, allotments, and adjustments work to together to create a districts M&O entitlement; facilities funding; charter funding; and recapture. Also mentioned during the discussion were statutory quirks and system complexities like the fact that the basic allotment is set in statute, but legislators each session have the option of funding at higher levels through the appropriations bill. The committee also discussed how in 2011 the legislature created a mechanism called the Regular Program Adjustment Factor that allows lawmakers to decrease the entire Foundation School Program (FSP) entitlement for every district with a single adjustment.

TRS Executive Director Brian Guthrie walked committee members through pension fund operations. Guthrie explained the TRS board’s decision to lower the assumed rate of return last summer to 7.25 percent down from 8 percent, which came as a result of market forecasts and input from the fund’s actuary. This caused the funding period for pension fund liabilities to extend from 32 years up to 87 years. Under state law, the TRS fund cannot offer a cost of living adjustment (COLA) to retirees unless the amortization period noted above is within 31 years.

Guthrie noted that the agency is requesting a 1.8 percent increase in the contribution rate in order to achieve a 30-year amortization period, which would allow for the possibility of a future increase in benefits, such as a COLA. This would cost $1.6 billion for the biennium from all funds.

Responding to a question from Rep. Giovanni Capriglione, Guthrie estimated the average pension payment for a TRS annuitant to be about $2,000 per month. This average figure covers all classes of public education employees, including auxiliary staff, such as bus drivers and custodial staff. For classroom teachers who have worked in Texas schools for 30 years, that amount is closer to $4,000 per month.

Guthrie then explained the healthcare programs under the agency’s umbrella: TRS-Care for retired educators and TRS-ActiveCare for active educators. Healthcare costs have skyrocketed in Texas, despite rising at a level slightly below the national average. This resulted in a $1 billion shortfall for TRS-Care heading into the previous legislative session, which was addressed by a temporary infusion of additional state funding, coupled with a significant increase in fees and reduction in benefits. The fund continues to run at a deficit.

Rep. Schaefer asked what impact a pay increase would have on the pension fund. Guthrie indicated that if all teachers saw a raise, there would be a negative short-term impact for TRS as a result of higher salary calculations for retiring members without the benefit of higher contributions. Guthrie suggested this could be mitigated by phasing in the salary increases' impact on the calculation of a member's highest five years of earnings. Guthrie suggested the short-term impact on TRS-Care would be positive.

Asked by Rep. Stucky how much it would cost to make TRS-Care sustainable, Guthrie suggested it would take more than $12-15 billion to create a corpus sufficient to produce funding as a result of investment returns. Even then, that process would take some time to get up and running. The deteriorating value of TRS-Care has led many retirees to leave the program, which exacerbates the financial stresses facing it. Guthrie added that the population was beginning to stabilize.

TRS-ActiveCare, which allows smaller and mid-size school districts to enjoy the benefits of group coverage through a combined risk pool, also faces affordability challenges due to statutory restrictions on how that program is funded. Five percent of districts – primarily the state’s largest districts, such as Austin and Houston – have opted out of TRS-ActiveCare. Last session, legislation was considered to allow districts a one-time opportunity to opt in or opt out, but such a bill was not passed ultimately.