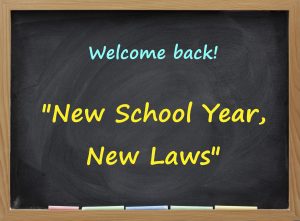 Welcome back! A new school year has begun for students and teachers across the state, and all the hard work of buying school supplies and prepping classrooms can finally be put to use. While much attention has been paid to House Bill 3, the school finance reform bill that passed earlier this year, many other bills came out of the 2019 legislative session that educators should get to know.

This week, the ATPE lobby team launched a series called "New School Year, New Laws" here on our Teach the Vote advocacy blog. As a complement to the many other outstanding resources ATPE shares with our members to help them understand their rights and responsibilities as educators, we're using this new blog series to point out some of the bills going into effect this school year that could have an impact on educators and students. Read our first post in the series here to learn about some new legislation taking effect regarding student discipline. Then check back with TeachtheVote.org every Monday for new posts about education-related bills that passed earlier this year. 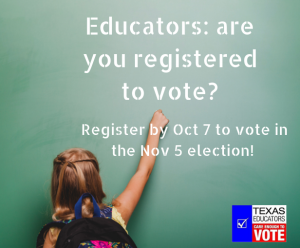 ELECTION UPDATE: Earlier this week, Gov. Greg Abbott announced a special election to replace Rep. Jessica Farrar (D-Houston) who will be resigning at the end of September. While special election dates also have been set to fill other seats being vacated, with some taking place on the same day as this November's constitutional amendment election, several legislators are announcing their intent to run for re-election. Read the latest election-related updates in this blog post by ATPE Lobbyist Mark Wiggins, and watch for more updates in the weeks to come as campaign season ramps up. Back to school can be a busy time for educators. With the registration deadline of Monday, October 7, just six short weeks away, don't forget to make sure your voter registration is active in time to vote in this November's election!

The 2019 Texas legislative session was dubbed the “Session of the Teacher” – and it showed. Legislators in both the House and Senate worked together to pass bills that will send billions of dollars to public schools (like House Bill 3) and help shore up the Teacher Retirement System (TRS) (via Senate Bill 12

). To keep up the momentum of this year's session and promote future legislation that benefits public schools, ATPE encourages educators and other public education supporters to share their thanks and feedback with their elected officials. ATPE members can log into Advocacy Central to send a quick and easy thank you message to their legislators and urge their continued dedication to public education. There is still a lot of work to do to ensure the best for our students and educators!

In its latest installment of "HB 3 in 30," the Texas Education Agency (TEA) has released two new videos, one addressing the topic of the Small/Midsized District allotment and another concerning college, career, and military readiness (otherwise known as CCMR) in high schools. Links to all videos in the series can be found here.